The Discoverers and Bulldogs were tied 28-28 in the third quarter on Friday at Pawnee Park when Columbus answered a North Platte touchdown with one of its own and made three straight defensive stands in the fourth while adding a field goal for a 38-28 win.

The two teams came into the night next to one another in the wildcard points standings and could do little more than trade spots. But when three prior North Platte opponents all won and earned the Bulldogs nine extra points, it offset the loss. North Platte remains No. 8 and Columbus No. 9. The Discoverers will travel west next week for the rematch in the first round of the Class A playoffs.

"It was two really evenly-matched teams, and that's what you see when you're looking at that 8-9 game," Columbus High football coach Craig Williams said. "We're very, very similar in our offenses - kids that just work hard and play hard. It was a fun game to go up against a team that's very similar to us, and we may get to do it all again next week."

Columbus took the final lead, in a game that saw three lead changes and four ties, on a Liam Blaser 6-yard run to cap a drive with 3:46 left in the third quarter. The Discoverer defense then ended the night by closing out the final North Platte drives on two interceptions and a stop on fourth down.

The offense turned the first interception into a 34-yard Blake Thompson field goal with 11:48 left in the game. That extended the advantage to two possessions for the first time all night.

Against a team that prefers to run clock and limit the amount of plays, that forced North Platte out of its comfort zone. Columbus also played better on special teams after halftime and limited North Platte's ball-control offense to long drives in order to score points. The Bulldogs could only do that once in the final 24 minutes.

A blocked punt and big kickoff return led to 14 North Platte points in the first half.

Columbus scored the first points after a North Platte fumble and a 3-yard Blaser touchdown run. The visitors answered on the next drive with a 1-yard run then took over in Columbus territory after a blocked punt and made it 14-7 on a 14-yard run. It was the fifth punt this season CHS has either had blocked or had the punter tackled behind the line because of a drop or a poor snap.

Columbus answered right away on a 16-yard pass from Brody Mickey to Ernest Hausmann then picked off a North Platte pass in the end zone with the Bulldogs driving to take the lead. Instead, Columbus regained the lead on a drive that ended with a 52-yard Blaser run for his second touchdown.

That made it 21-14 with just 2:12 left in the half when another special teams mistake allowed the Bulldogs to tie it. They returned the ensuing kickoff to the Discoverer 5 and scored moments later on a 5-yard run.

Columbus received the third quarter kickoff and made it 28-21 less than two minutes later on Mickey's 51-yard touchdown scramble. North Platte tied it back up at 28-28 with 7:09 left in the third on another 1-yard run but Columbus answered again on Blaser's third touchdown.

The defense did the rest.

"It was a great job by our defensive staff and our guys on defense because we were having a hard time stopping them in the first half," Williams said. "We got two or three stops in the second half that allowed us to pull away and get that 10-point lead. It goes back to the resilience of our kids."

That's true of the game overall. Columbus was coming off an embarrassing loss to Bellevue West the week before.

"To bounce back from a 62-point loss last week, to me, is about as impressive as anything," Williams said.

Mickey was 7 for 11 passing with 91 yards, a touchdown and two interceptions and Hausmann caught four passed for 67 and the one score. Riley Iburg added 79 yards rushing on 10 carries and Mickey had 73 on five.

The Columbus rushing offense rolled up 328 yards with two backups on the offensive line due to one member missing the game for illness and the other suffering an injury during the game. Erick Marxsen and Talen Traub came on in relief and were up to the task.

"To come out and get over 300, establish that run game for us again, that was a big deal," Williams said. "We had some backups in there on that left side that came in and did a good job. They gave our backs a chance to find a hole and get down field."

Blaser had the most effective game of his career with 20 carries, 138 yards and the three touchdowns.

"He's so good about making that first, quick cut, making the first guy miss and running through a few tackles," Williams said. "Liam does a good job of moving the sticks. You don't have to be perfect when Liam is carrying the ball because he can run through some arm tackles and he's always going to get that extra yard for you."

If you have to ask the question, you haven't been paying attention. At least that's the attitude coach Craig Williams and his team have had si…

If there's been a song playing on repeat in the Columbus High locker room this week it might be Tom Petty's 1989 hit "I won't back down." 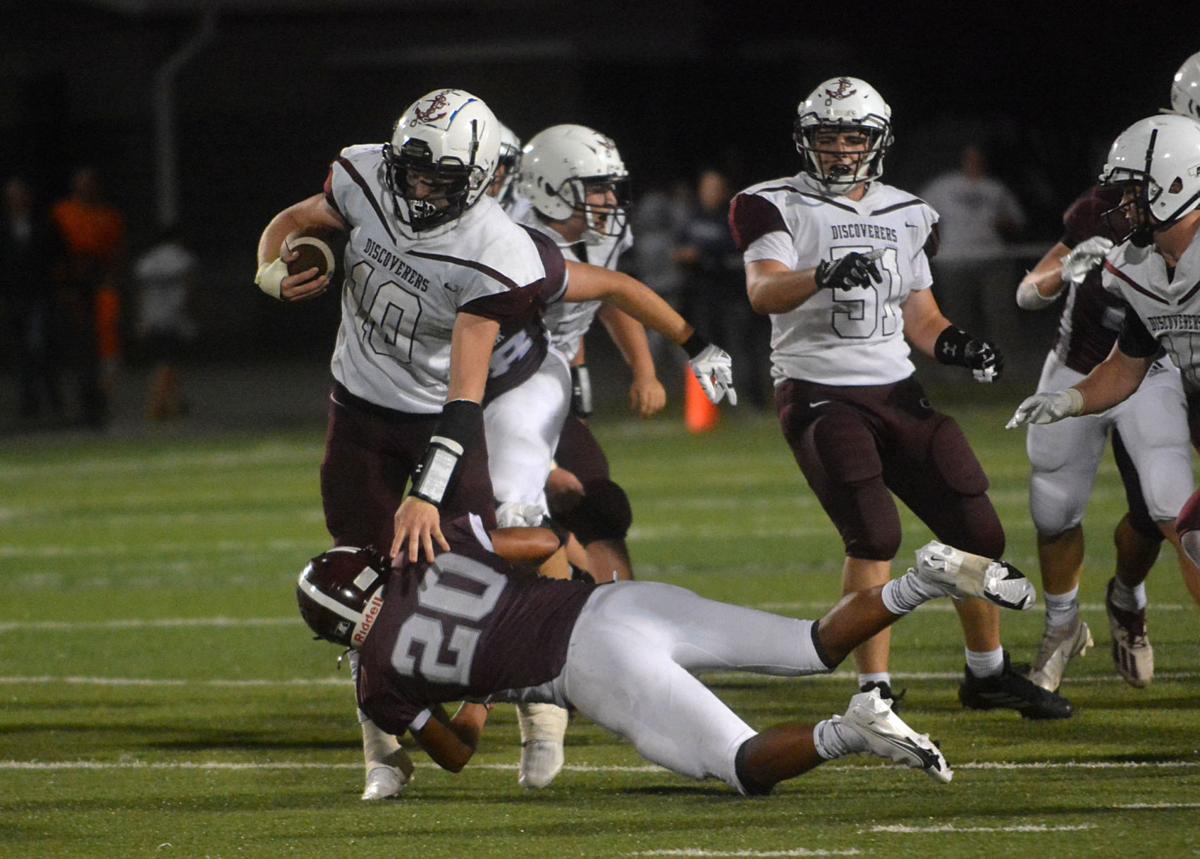 Columbush High junior Liam Blaser runs through a tackler in the Week 2 win at Norfolk. Blaser picked up 138 yards and scored three touchdowns in Friday's home win over North Platte. 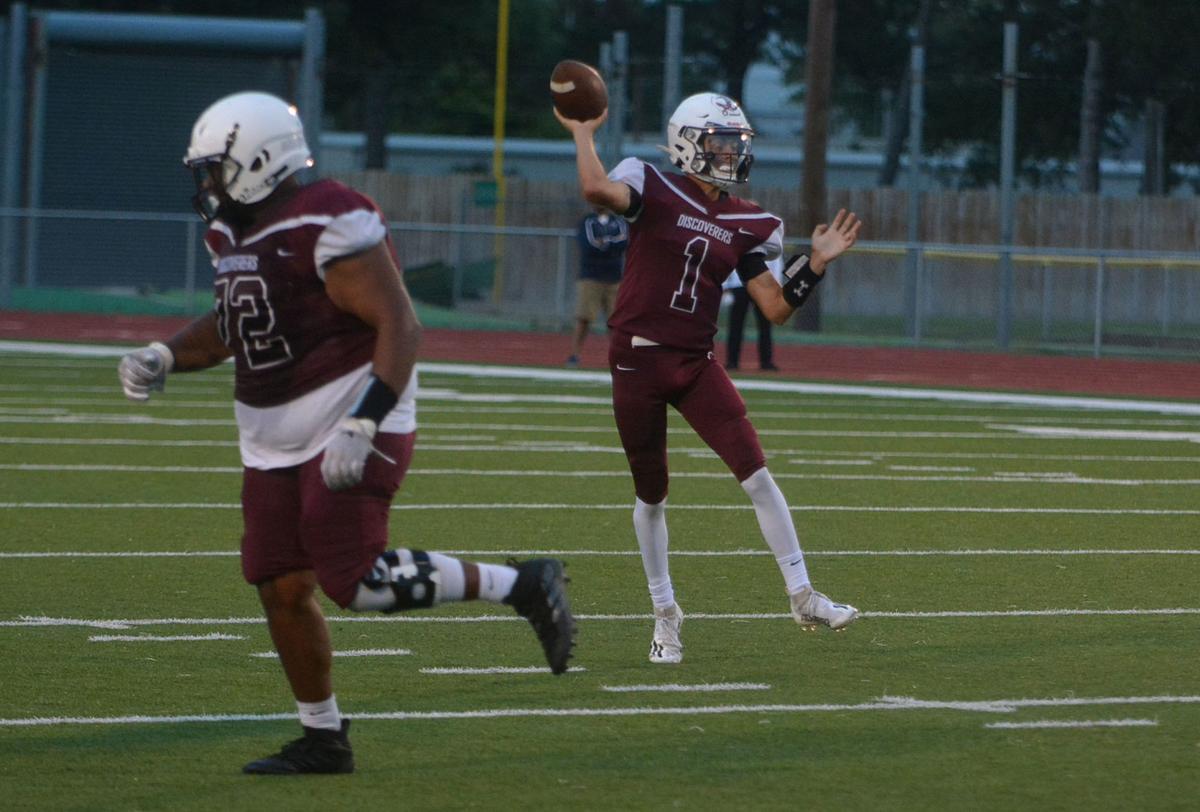 Columbus High senior quarterback Brody Mickey rolls out and loads up for a pass in a home win over North Star in September. Mickey threw for a touchdown and ran for another in Friday's win over North Platte.