Friday night's district opener between Lakeview football and Wahoo featured a defensive slugfest for three quarters. Both teams scored once on special teams and they combined for 12 punts through the early stages of the fourth quarter.

Wahoo took the lead 10-7 with 4:47 remaining on a 28-yard field goal. On the ensuing drive, Lakeview faced a 4th-and-7 at its own 41-yard line with 2:43 remaining in regulation and went into its bag of tricks.

Clayton Thomson completed the pass to Turner Halvorsen, who then pitched the ball to Braxton Borer. The senior sprinted down the sideline before being tackled at the 7-yard line for a 52-yard gain.

Two plays later, Thomson connected with Halvorsen rolling to his left on a 12-yard touchdown pass to put the Vikings ahead 14-10 with 1:38 remaining.

Wahoo drove the ball to the Lakeview 31-yard line, but after back-to-back incompletions, junior linebacker Yordi Dominguez intercepted the pass on fourth down to seal the victory.

"Proud of our kids. Overcame a lot of adversity. We did not play a very clean game (tonight)," Lakeview head coach Kurt Frenzen said. "We had a lot of penalties and we had some mental mistakes, but when it counted we made plays. We had some gutsy performances from a lot of kids tonight in adverse situations."

Frenzen said the hitch and pitch has worked for them in the past and it paid off again Friday night.

"Turner (Halvorsen) didn't have a lot of space. It takes a lot of great concentration to catch that because he knows he's got to get it out quick, but then he's got a guy bearing down on him," Frenzen said. "To have Turner get that ball away to Braxton (Borer) in stride. We practice it like twice a week and you think we would practice it every day."

Lakeview outgained Wahoo 204-177. The Warriors offense mustered just three points all night. Its lone touchdown came on a blocked punt returned for a touchdown with 7:04 remaining in the second quarter.

"I studied a lot of film this week. I knew this was a big game. I knew everything that was coming," Borer said. "Just tried telling everybody what I thought was coming and I think it paid off. Everybody was flying around."

Halvorsen said the defense locked in all week knowing their responsibilities.

"We did a good job playing defense all around. Run, pass," Halvorsen said. "We didn't let no one get burned on us. We played on top of them all night and we were the physical team."

Thomson stepped in as the full-time quarterback after Brenden Sloup suffered a lower-body injury on an interception with 2:16 left in the second. The sophomore finished the night completing 5 of 8 passes for 88 yards and the game-winning touchdown pass.

"Clayton Thomson came into this game probably thinking he's not going to play (today) and he did amazing. He's only a sophomore. He came in there playing like he's a senior," Halvorsen said. "That touchdown, he just made his read. The flat wasn't open. I had a great route in the corner of the end zone. He put a great ball in. The rest we just did. It was great."

Halvorsen capped the night with five catches, 53 yards and the game-winning score. Ternus was the top tailback rushing for 82 yards on 18 carries.

Borer scored the first Vikings touchdown of the night, a 70-yard punt return to the house with 12 seconds left in the first quarter.

"I was just trying to make a play. The blocks were set up," Borer said. "Hooch (Halvorsen) ran with me all the way to the end zone. I wouldn't have gotten there without his block there."

Lakeview improved to 3-2 on the season and it began district play 1-0. The Vikings will travel to Schuyler on Friday.

"This is huge. This is a very historic program. Wahoo's been excellent over the years. Just won a state title a couple years ago. To get this one (tonight) means a lot," Frenzen said. "We're going to enjoy (tonight), but boy we got to get back to business. Our district is going to be tough and teams are going to be ready to play, so we're just excited to have the opportunity moving forward to try to stay undefeated in district each week."

LINCOLN - In a battle of the top two seeds in Class D-2, Howells-Dodge returned to Memorial Stadium on Monday looking to claim its second stra…

Clarkson/Leigh head to Memorial Stadium for the first time as a co-op school Monday in the NSAA Class D-1 state championship game.

Class B: Bennington runs winning streak to 26, pulls away from Gross to win title

The confidence that came with winning one state title lifted Bennington to a second straight triumph Tuesday night.

It is the second time in Norfolk Catholic's state-leading 11 championship wins that the Knights have shut out their foes.

Vikings proud of season after falling to Pierce in state quarterfinals 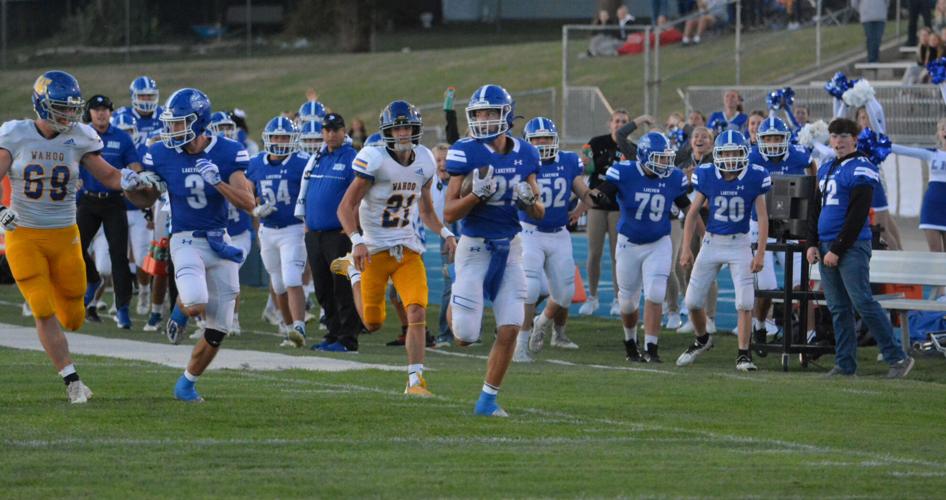 Lakeview senior Braxton Borer returns a punt down the sideline for a touchdown in Friday's game against Wahoo in Columbus. 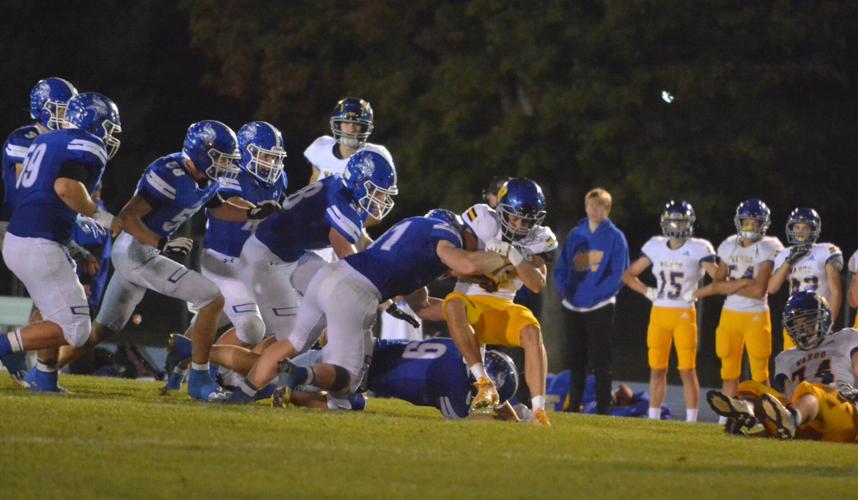 Lakeview linebacker Landon Ternus (41) and a host of of Vikings combine to stop Wahoo running back Trevor Ehrlich Friday in Columbus. 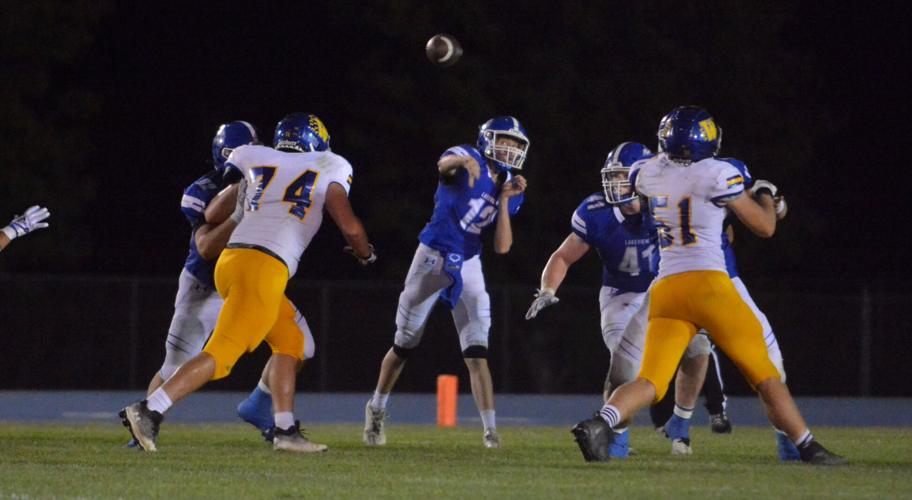 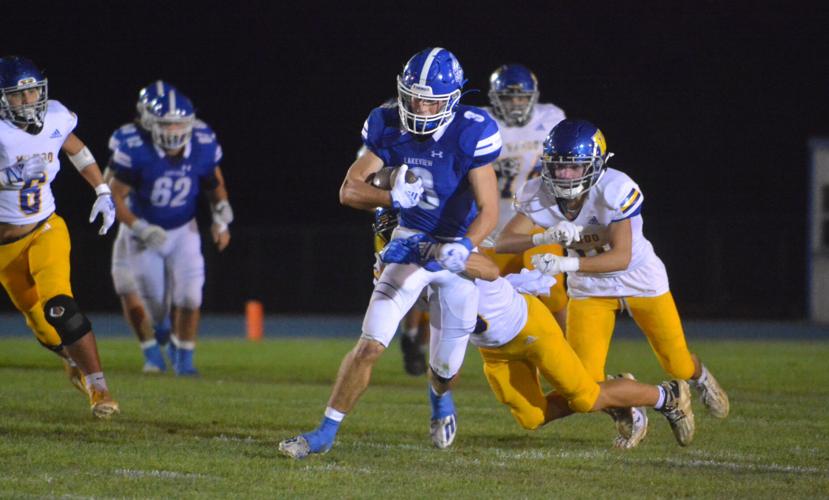