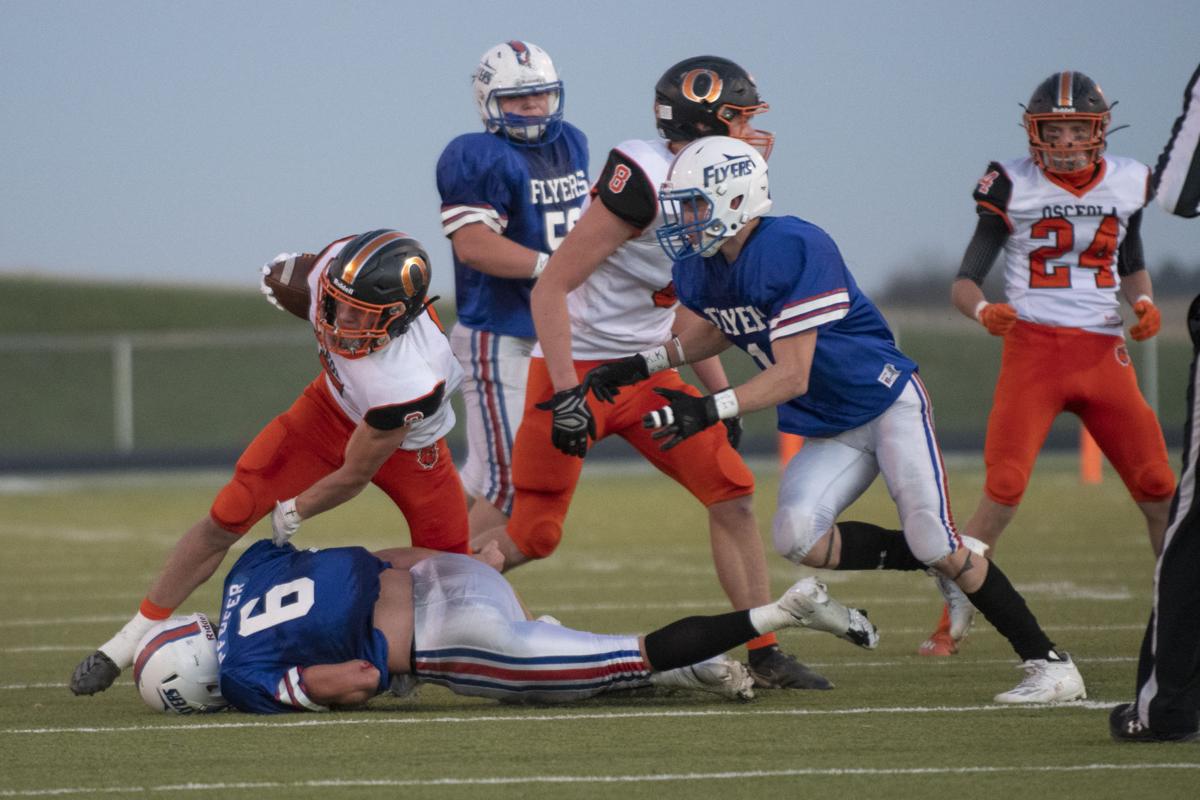 Osceola senior Bryce Reeds stiff arms a defender to the ground in the playoff win at Humphrey St. Francis. Reed led the Bulldogs with over 1,800 rush yards and 31 touchdowns. Osceola averaged over 65 points per game this fall. 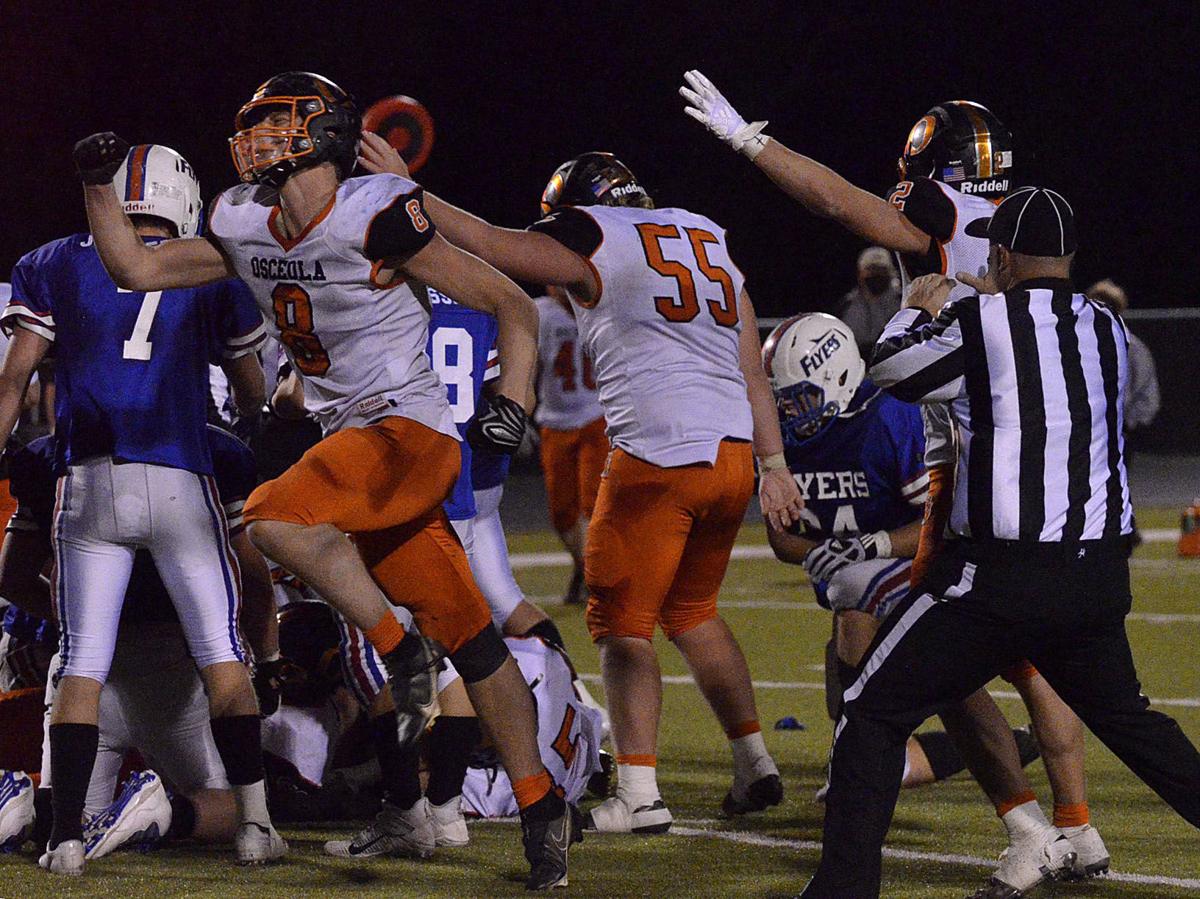 Osceola's Carter Girard (55) and Bryce Reed (2) signal a change of possession while teammate Kyle Sterup (8) leaps for joy after a fumble recovery in the road playoff win at Humphrey St. Francis.

There's no doubt Osecola football will walk away from the 2020 season with a foul taste in its mouth.

The Bulldogs had the most potent offense in program history, the most dominant, punishing defense the school had ever seen and used both to torch opponents on their way to an unbeaten regular season.

That meant little to Osceola when a scoreless second half at Falls City Sacred Heart meant elimination in the quarterfinals. For a group that raised a trophy in D-1 last season, it felt so premature.

So, yes, to close without a championship feels almost unfair. Coach Bog Fuller sees it in a different way. For two years, Osceola football achieved every goal it had set, every single one, except for a second championship.

The manner in which that was accomplished is still impressive.

"When you sit down and think about it, we were just really fortunate to have a season, and it not get interrupted other than one game that had to cancel. I think those seniors were happy to walk away with the satisfaction that they were able to compete their final year," Fuller said. "They had all their goals met but one, and they did in so many big ways. Most teams can never say that."

Osceola scored a school record 659 points, an average of 65 per game, and rushed for 419 yards per contest. Until the playoff win over St. Francis, every victory was by at least 33 points including a record-setting 100-42 win over Nebraska Lutheran in which the Bulldogs had 80 points by halftime.

Bryce Reed was the top weapon on a team full of options. He carried the ball 155 times for 1,839 yards, an average of 11.5 per carry, 183.9 per game and found the end zone 31 times. Quarterback Isaiah Zelasney added averaged over nine yards per attempt and scored 26 times while Xavier Blackburn averaged 10.4 and scored 11 touchdowns. Two other players had at least 15 attempts and picked up better than six yards per carry.

Osceola only averaged a handful of passes per game, but was efficient in that area as well. Zelasney hit on 21 of 41 for 376 yards and six touchdowns without an interception.

Reed and Kyle Sterup both caught seven passes for 125 yards or more.

Simply put, it was a legendary unit the likes of which Fuller found hard to compare.

"That was probably the biggest surprise," he said. "I knew we were going to have a good offense, but every week it just seemed like it got better."

Osceola allowed 230 points and 74 of that was in the playoffs. The rest of it was almost wholly against the second unit.

Sterup led the way on that side of the ball with 133 stops, more than 13 per game and eight tackles for loss. Five players had 50 or more tackles, the defense generated 13 TFLs and five sacks.

All of it came from a defense so stacked with talent that Osceola rarely called anything other than formation adjustments. Players were allowed to read and react.

Zelasney returns, as does Blackburn and guard Carter Girard. Fuller expects some continuity in the backfield but said there will be a learning curve in place almost every where else.

"I don’t see us changing a whole lot offensively and defensively. Are we going to be able to score at will? No, that’s probably not going to happen," Fuller said. "We’re going to have to start some guys up front that haven’t yet started a varsity game up front. That’s going to take a little time to get into the routine of doing things correctly every down."

Can the Bulldogs be a good team. Fuller very much believes so if youth can find its way. Can Osceola be historic again. No, what the team achieved this past year on both sides of the ball was a once-in-a-lifetime scenario.

As the years wear on and the sting fades from the playoff loss, Fuller hopes his team can recognize just how special it was. Though the trophy case remains unchanged, 2020 will be the measure with which all future Bulldog offenses and defenses are compared.

"We’ve had two years of really outstanding seasons, and you walk away from it almost obtaining all of your goals," Fuller said. "Walking away from it, our kids were back-to-back district champs, they improved every week and we're going to miss all eight of our seniors. Their leadership has been outstanding. They're a special group."

Osceola senior Bryce Reeds stiff arms a defender to the ground in the playoff win at Humphrey St. Francis. Reed led the Bulldogs with over 1,800 rush yards and 31 touchdowns. Osceola averaged over 65 points per game this fall.

Osceola's Carter Girard (55) and Bryce Reed (2) signal a change of possession while teammate Kyle Sterup (8) leaps for joy after a fumble recovery in the road playoff win at Humphrey St. Francis.