For a coach who used to play on the offensive line in his career, could there be anything more satisfying than a 10-minute drive to salt away a victory?

From the perspective of Scotus Central Catholic coach Tyler Linder, no. It just doesn't get any better.

That's what his guys did Friday in Albion to earn a 21-12 win over Boone Central in a matchup of No. 5 at No. 3. Both came in unbeaten. Only Scotus walks away unblemished thanks to several factors including a blocked extra point, a fake field goal and a 20-play, 10-minute, 17-second drive that ended with Devon Borchers in the end zone and just 3:58 left in the game.

Scotus also connected on a Trenton Cielocha 13-yard pass to Garrett Oakley for a touchdown in the third quarter on a trick play and came back from a 6-0 deficit early on a Cielocha to Chance Bailey 64-yard pass and catch in the first quarter.

But the defining sequence of the night was when the Scotus defense rose up for a stop on a Boone Central two-point conversion to preserve a 14-12 lead and followed that up with the drive of the year.

"You don't really think about it when you're in the moment; you're thinking, next play, next call and what's going on," Linder said. "It really dawned on me when I looked at the clock. … I remember, at one point, just glancing back and seeing only 5 and 1/2 minutes left in the game. 'Gosh, if we keep bleeding this clock down and we don't score, we might never get the ball back.' It was at that point in time we realized we have to keep going for it on fourth down and we're dialed in in the run game. It was just awesome."

Scotus converted one third down and three fourth downs on a possession that started at the Shamrock 35 and included 12 runs for Borchers, five for Cielocha, one for Zane Beiermann and two passes.

Borchers picked up 46 yards on the ground and touched it four of the last five plays. Cielocha picked up a fourth-and-2 from the Boone Central 11 on a 5-yard carry then handed it off to Borchers two more times for a 2-yard run then a 4-yard run that put the game out of reach.

Following Cielocha's extra point, Scotus led by nine with less than four minutes remaining. The Cardinals drove it down to the Shamrock 39 but tossed an interception to Cielocha with 2:09 that sealed the win.

Borchers touched it three more times and made it official on a 7-yard run that picked up a first down that allowed Scotus to run out the rest of the clock.

"It just feels really good right now. The bus ride back home, I couldn't stop smiling," Linder said. "There was a lot of hype around this game. You had two undefeated teams playing in perfect football weather. I'm just really proud of the way our guys showed up tonight and prepared all week."

For Cardinal coach Mark Hudson, he suspected his group might have been a step off following three straight weeks that included No. 7 Pierce, 5-3 Battle Creek and 5-3 Wayne.

The game came down to making plays, and the Shamrocks just made more when it mattered most.

"Essentially, they converted fourth downs on their drive in the second half and we missed on two fourth downs in their territory in the first half; game of inches," Hudson said. "They have a really good team. The schedule leading up to the game might have had some impact also as we didn't seem to have the same juice. We need to get that back because we'll have to play strong opponents every week in the playoffs like we just did."

Boone Central scored first on a 19-yard pass from Alex Christo to Ashton Schaefer on fourth-and-6 with 2:26 left in the first quarter. But a wave of Shamrocks crashed through the edge of the line and deflected enough of the PAT that the deficit was only 6-0.

Cielocha then found Bailey on the 64-yard touchdown pass two plays later and Scotus went up 7-6 when Cielocha converted the kick.

It stayed that way until the second half thanks to Scotus fourth-down stops at its own 27 then its own 19 in the second quarter.

The Shamrocks extended the lead midway through the third quarter when a drive stalled at the Boone Central 13. Reaching back into his bag of tricks for a play from 2011, Linder called a fake field goal that had a snap to holder Josh Faust tossed back to Cielocha for a throw to Oakley. The 'Rocks senior tight end crossed the formation from right to left and caught it at the 2 for an easy walk in.

An extra point made it 14-12 at the 8:07 mark. Boone Central answered right away in just about six minutes on a 10-play drive that culminated with Braden Benes' pass to brother Brant Benes for a 7-yard score. But because of the blocked PAT earlier, the Cardinals were forced to go for two.

A fumbled snap on the play prevented Boone Central from a legitimate try and preserved Scotus' two-point edge. The Shamrocks then went on a drive that might already be famous in the annals of Scotus football.

"We have our weaknesses just like every other team, but there's something special about this year's Shamrocks," Linder said. "They believe in each other, they play hard for each other, they show up every single day and if we do what I believe we're capable of doing, we can definitely make a run at this thing."

Shamrocks will adapt without Cielocha

Fortunately, or unfortunately, depending on the perspective, Scotus Central Catholic has been here before. In fact, just two years ago, the Sh…

Scotus Football: Going back to the basics

Equating poor performances with what happens in the bathroom has long been a tradition of evaluating results. That might not have been more tr…

How the Shamrocks got their groove back

Scotus Central Catholic football and coach Tyler Linder were set on using an intense, focused week of practice to put away a tough 35-0 loss t… 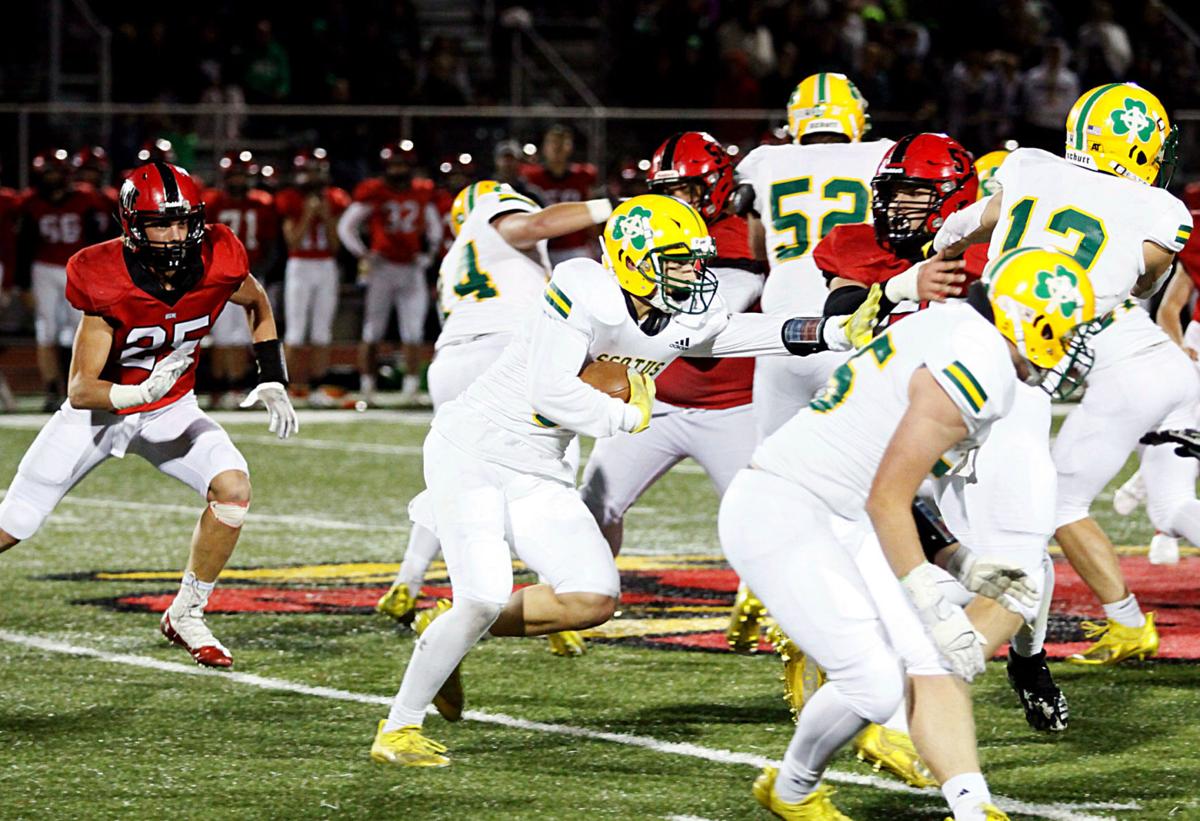 Scotus quarterback Trenton Cielocha follows his blockers for a gain on Friday in Albion. Cielocha and the Shamrocks took down No. 5 and previously unbeaten Boone Central 21-12 and improved to 8-0 on the season. 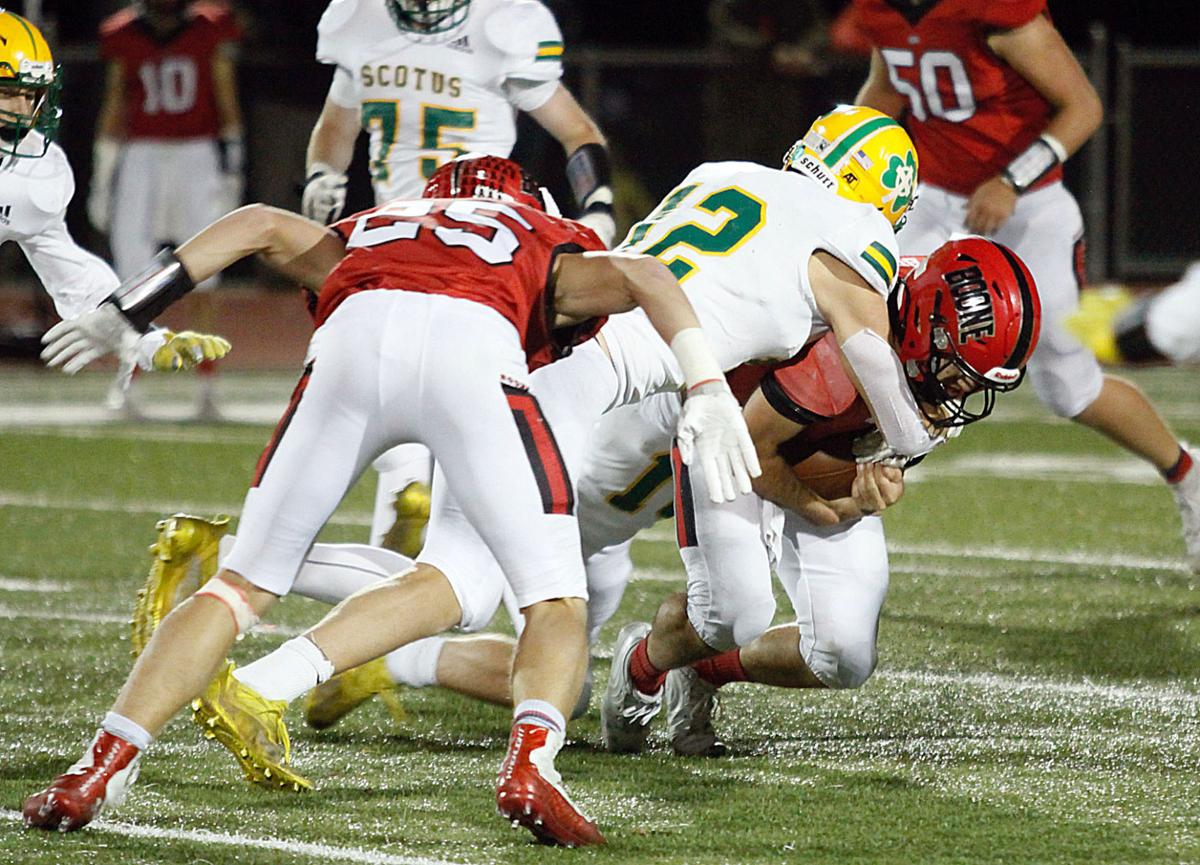 Scotus senior Zane Beiermann brings down a Boone Central ball carrier for a loss on Friday in Albion.