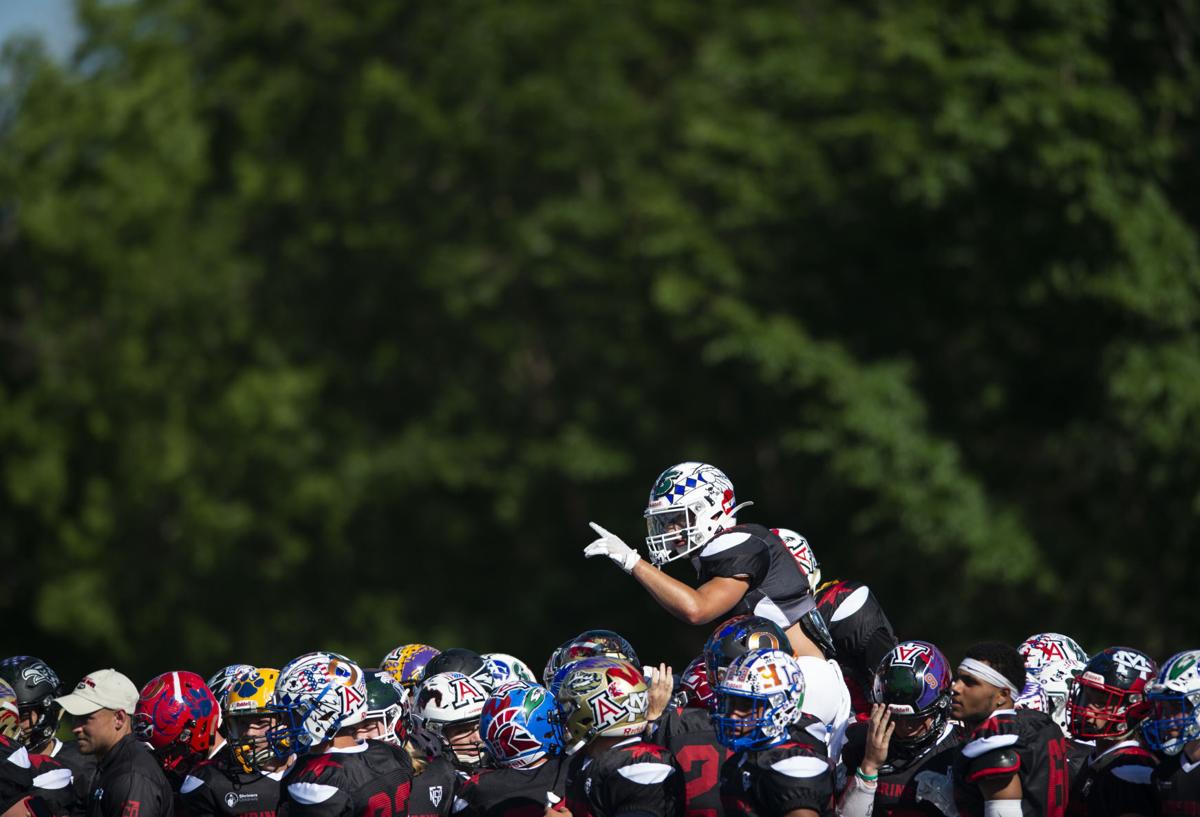 South's Christian Rystrom (5) gets carried off the field by his team after warmups Saturday before the Shrine Bowl at Nebraska-Kearney's Cope Stadium. 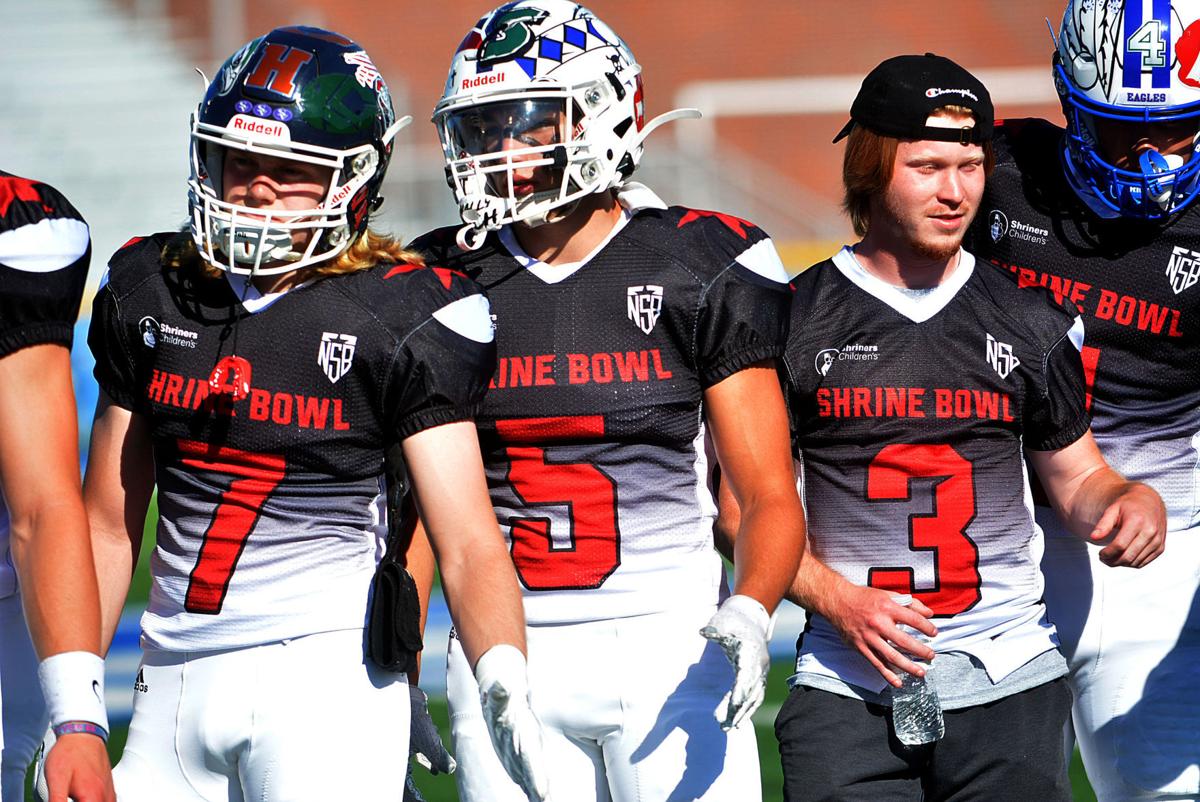 Cross County's Christian Rystrom (5) waits for his coaches in the pregame handshake line at the Shrine Bowl. Rystrom was a late add to the game on the first day of camp, rushing to Kearney after a phone call that afternoon. 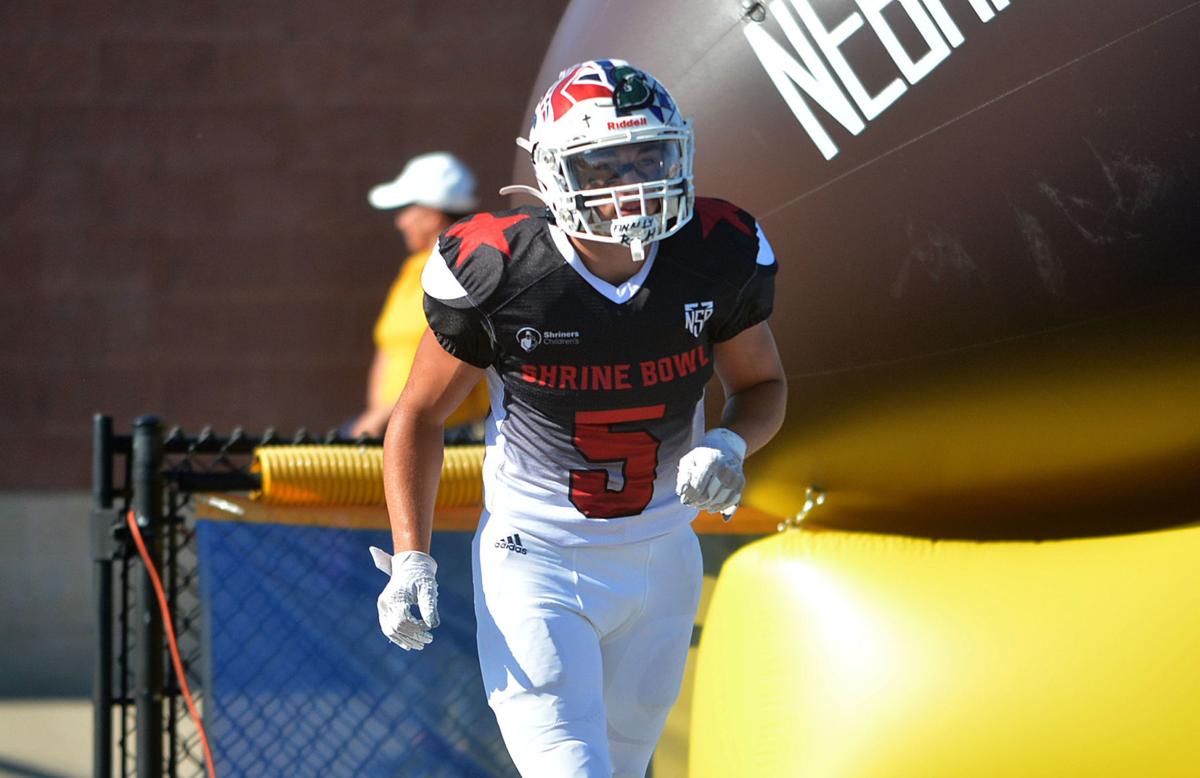 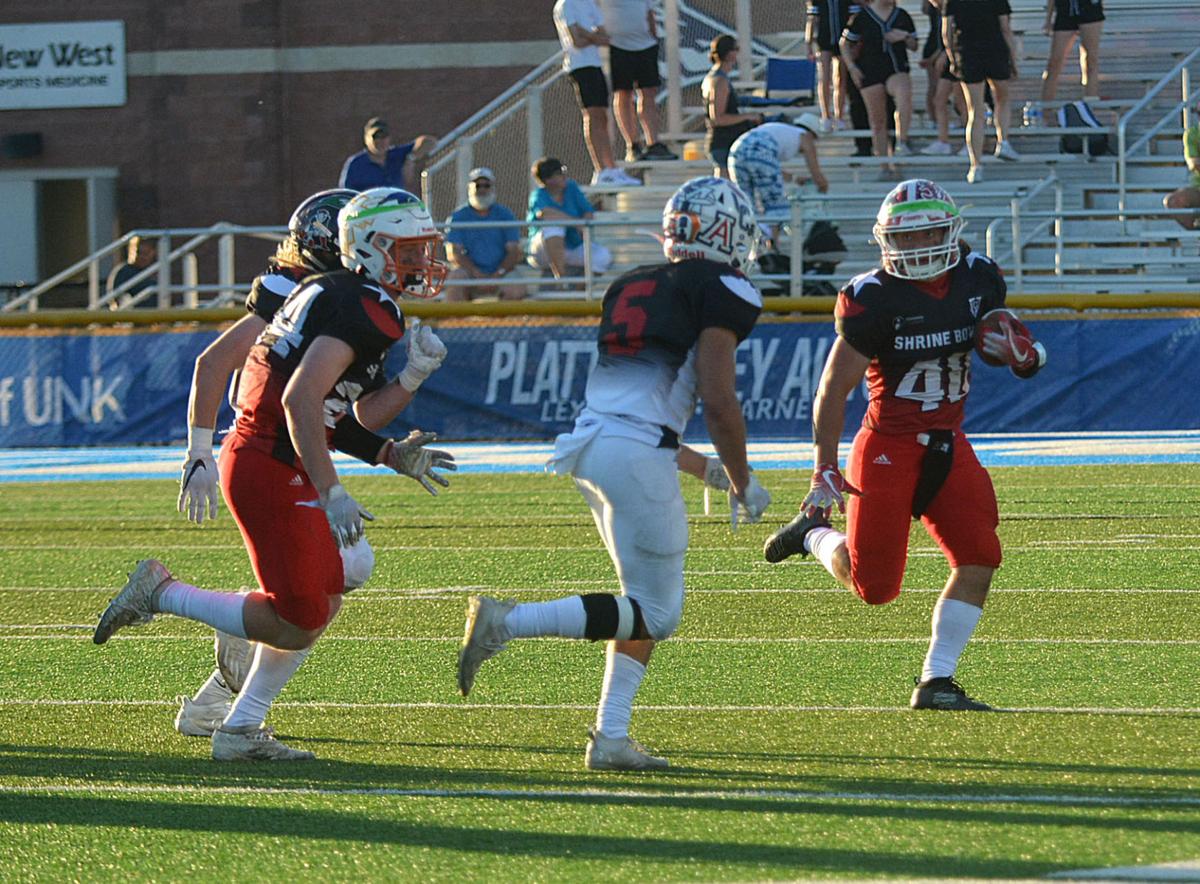 Christian Rystrom (5) chases the play and gets in position to make a tackle on running back Tommy Stevens of Ord on Saturday at the Shrine Bowl.

An early morning on the second floor of Randall Residence Hall at UNK last week told the South Team coaching staff all it needed to know about Cross County's Christian Rystrom.

In order to avoid waking his roommate, and behind on the defensive game plan because of his late arrival, Rystrom was out in the lounge area using the flashlight on his phone to review the playbook.

Rystrom played 8-man football and had a learning curve adjusting to a bigger field with more traffic between the lines in the first place. But instances such as that told Platteview's Mark McLaughlin, the South team head coach, all he needed to know about his new cornerback - Rystrom deserved a spot on the field, and they were going to find a way to make it happen.

"We call him and we tell him, 'We need you here today, like ASAP,' went through the packing list, said, 'These are the things you need to bring,' and he said, 'I'm really sorry coach, I have no idea what you just said; I'm shaking right now,'" McLaughlin said. "To me, that's all you need to know; that kid needs to play. Everything around him blacks out, and he had no idea what was going on around him. So, we were in love with him instantly."

Rystrom was a late add to the South Team Shrine Bowl roster when one player didn't show up on May 30. He was with his sister and his mom in York getting Chinese for lunch when they were on the way back to Stromsburg at about 2:30 when his coach at Cross County, Hayden DeLano, called to ask him what we was doing the next week.

Among other activities, he was set to take his girlfriend to the zoo in Omaha. DeLano asked if he'd rather play in the Shrine Bowl. The option was a no-brainer.

Not long after DeLeano's call, McLaughlin rang him up to make the formal offer. To say the least, Rystrom was stunned. He quickly located the pads and helmet he needed to play in the game, grabbed his toothbrush and a few changes of clothes and arrived in Kearny just after 5 p.m.

For a few days, his girlfriend was not pleased. She didn't know what the Shrine Bowl was. But after she was informed of the honor and saw how much his teammates and coaches loved him on Saturday, it was obvious that his time spent west instead of east was for the best.

McLaughlin spoke Friday at the Shrine Bowl banquet about opportunities. He and his staff had picked out Rystrom for the roster initially but couldn't see who he could replace among the first 45 or 46 players on the list. Thus, he came up one or two spots short.

When another opportunity arose to right that wrong, there was no hesitation. For McLaughlin, the scenario was divinely inspired.

"Of all the things that don't involve the kids, the patients in the Shriners Hospitals, I am most thankful for the opportunity to get a second chance with that kid," McLaughlin said. "...If that is not God intervening and saying, 'We're going to make an opportunity for this kid,' I don't know what is. If one player doesn't show up, we don't get that chance."

Rystrom started at cornerback on Saturday, made a handful of tackles and never gave up anything critical that affected the scoreboard. Full defensive stats weren't available after the game, but Rystrom had to be near the lead in tackles.

"I thought I was mostly a backup. I didn't plan on playing at all, but I had a really good couple of practices, made my way up to second-string corner and some guys got hurt," Rystrom said. "I filled in and just tried to play my role.

"...They brought me in just like it was a brotherhood."

McLaughlin the guys and the coaches already there were more than willing to spend more time with Rystrom to get him caught up and mentally prepared. And while that says something about Rystrom's teammates, McLaughlin also said Rystrom earned that all on his own.

As if the phone call wasn't enough, a chance encounter South Team defensive coordinator and Papillion-La Vista South head coach Tim Clemmenger had with Rystrom said it all. At 5:30 a.m. the next morning after arriving, Clemmenger crossed paths with Rystrom out of his room studying the playbook.

"The kids didn't get up until 6:30 or 6:45 and Clemmenger is walking through the lounge and here's Christian Rystrom...reading the defensive playbook at 5:30 or 5:45 in the morning by himself," McLaughlin said. "It's like, holy cow, man. That kid wants to play. He didn't have access to any of the material before that. The best he could do was wake up and read it; so that's what he did.

"It was kind of at that point we decided...this kid is going to play a lot."

Rystrom is working on finding another time to take that trip to the zoo. He'll be at Dakota Wesleyan this fall after accepting an offer to play football for the Tigers.

"(The Shrine Bowl) is a lot different than 8-man football," he said with a laugh moments after Saturday's game. "I feel really good where I'm at. I can't wait to take it on to the next level."

Detroit Lions embrace being underdogs in 2021

South's Christian Rystrom (5) gets carried off the field by his team after warmups Saturday before the Shrine Bowl at Nebraska-Kearney's Cope Stadium.

Cross County's Christian Rystrom (5) waits for his coaches in the pregame handshake line at the Shrine Bowl. Rystrom was a late add to the game on the first day of camp, rushing to Kearney after a phone call that afternoon.

Christian Rystrom (5) chases the play and gets in position to make a tackle on running back Tommy Stevens of Ord on Saturday at the Shrine Bowl.