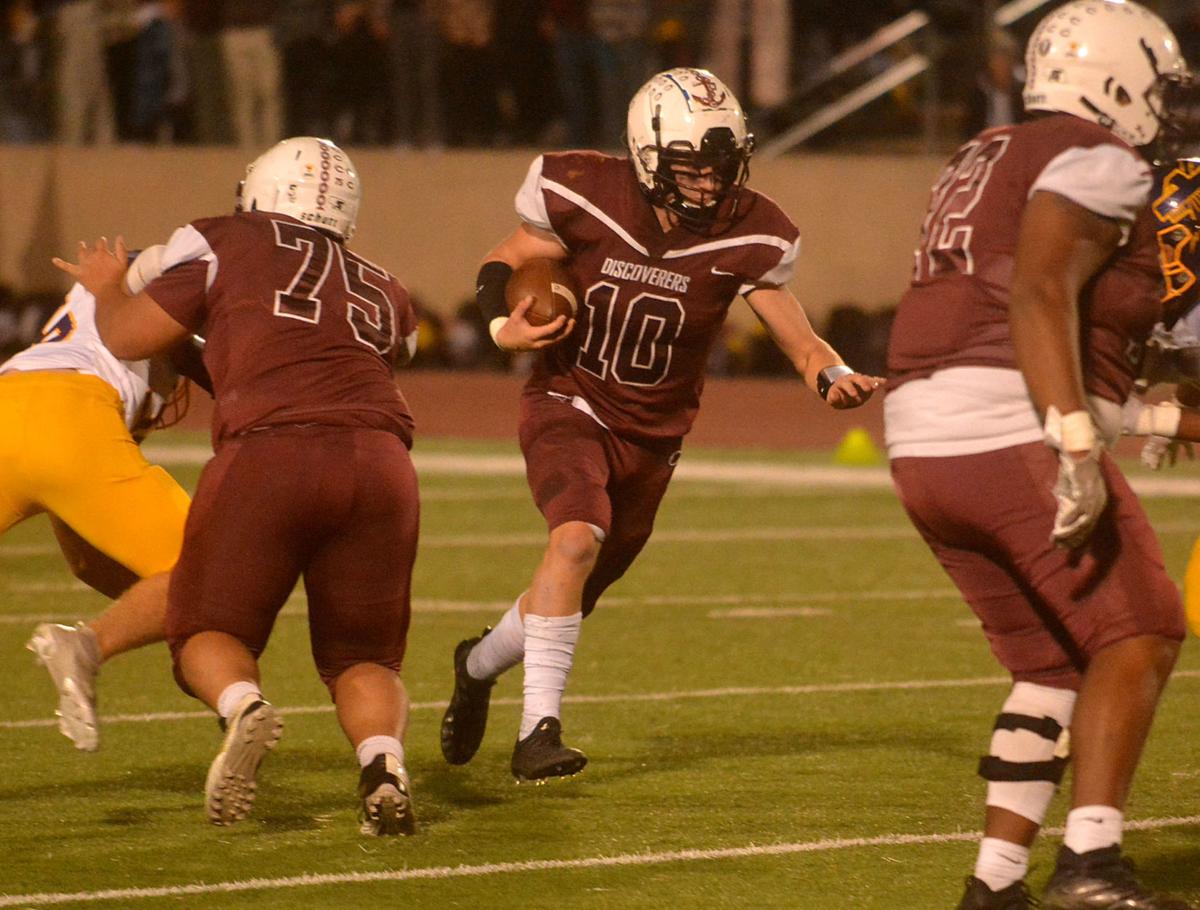 Liam Blaser finds some running room on Friday at home against Bellevue West while teammate Jaden Williams provides a block to open up the hole. 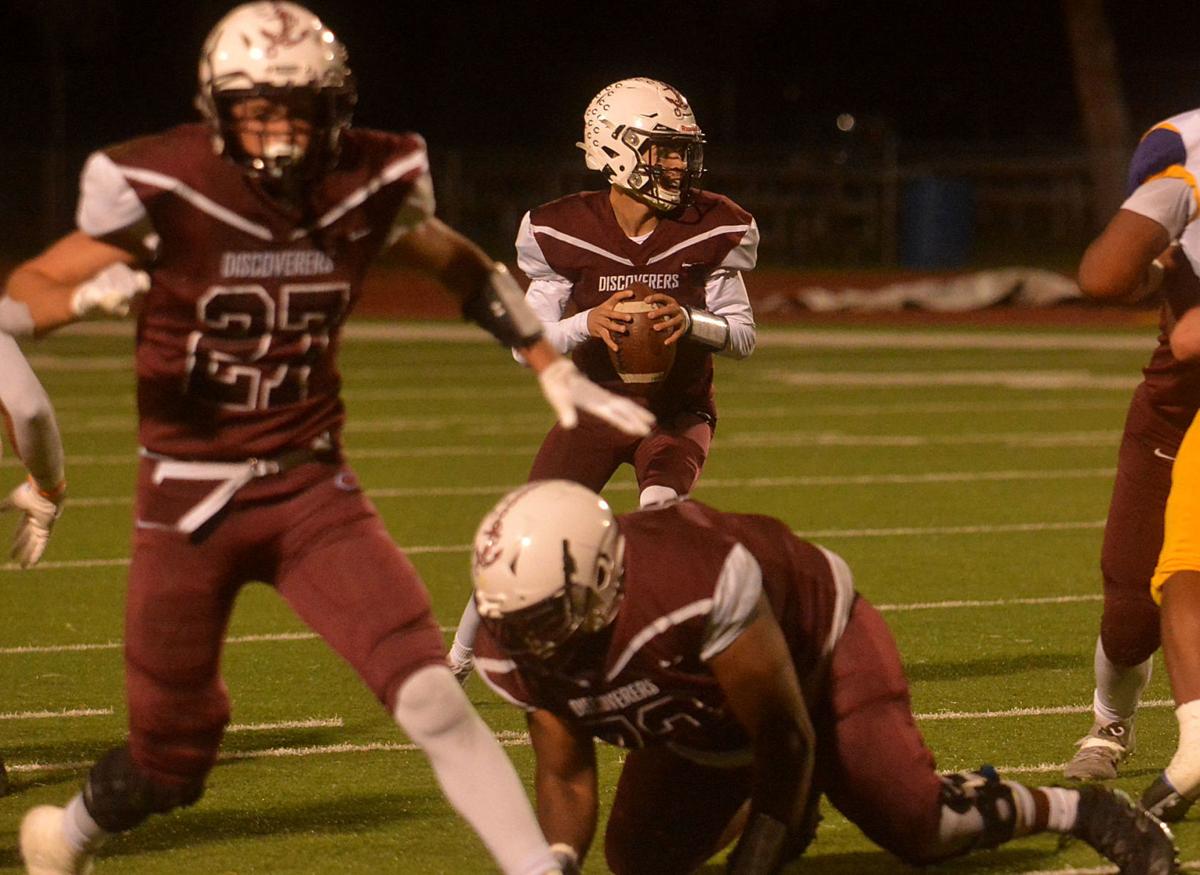 Columbus quarterback Brody Mickey looks for an open receiver on Friday at Pawnee Park against No. 2 Bellevue West. 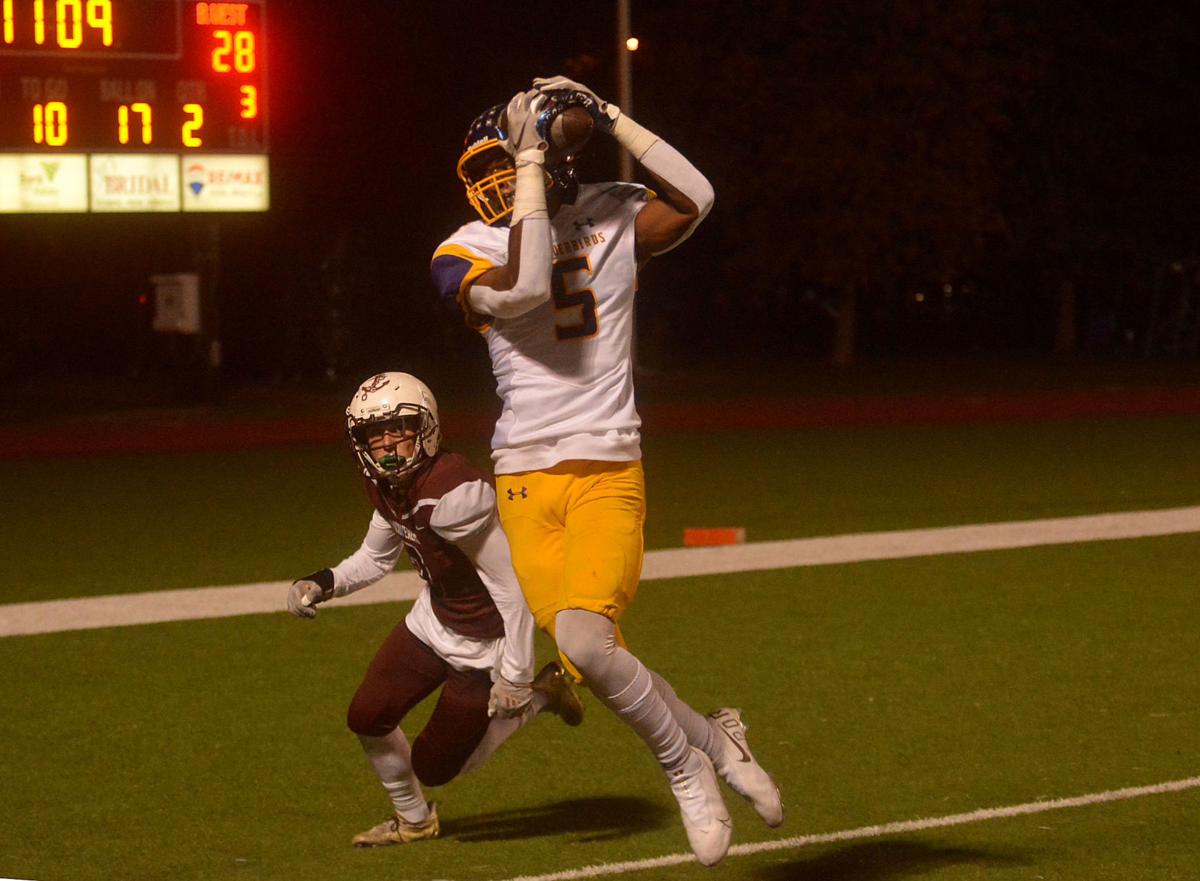 Bellevuew West sophomore receiver Dae'vonn Hall makes a 17-yard touchdown catch to put the Thunderbirds up 35-0 on Friday in Columbus.

The Thunderbirds (7-1) struck for four first-half touchdowns, put up 49 points in the first half and created extended scoring plays of 64, 37 and 38 in the first loss for CHS (6-2) since week one at Omaha Central. The 62 points against are the most Columbus has allowed since at least 2003. It's also the largest margin of defeat in more than 18 years.

Bellevue West scored its first touchdown of the night on a 64-yard pass from quarterback Luke Johannsen to Kaden Helms on the fifth play of the game. The T-Birds only poured it on from there.

Helms had three touchdown catches before the end of the first half, running back LJ Richardson rushed for 155 yards on 18 carries to go with four touchdowns and Johannsen was 11 of 18 throwing for 296 yards and four touchdowns of his own.

"They're a good football team, and, honestly, I don't know what we could have done different there in that first half," Columbus coach Craig Williams said. "We put the ball on the ground once on a punt, but they're good up front and their good on the back end on defense. Their receivers are the best in the state. Their quarterback might be the best in the state. It is what it is. It was a tough night for our kids; nightmare first half especially."

The trouble on the punt came on Columbus' first drive of the game following Johannsen's 64-yard throw to Helms. For the fourth time this year, CHS had disaster strike in a punting situation. Columbus has had two kicks blocked or partially blocked a poor snap and a bobble that led to a tackle in the backfield and Friday another bobble and tackle that set Bellevue West up at the 15.

Richardson scored on the very next snap for a 14-0 lead. Columbus found its first first down on its next possession thanks to a pass interference but had to punt again. Bellevue West went 69 yards in just four plays thanks to a 37-yard touchdown catch by Helms for a 21-0 lead.

A 38-yard pass to TK Barnett set up an 11-yard touchdown run by Richardson and a 28-0 score with 3:55 still left in the first quarter. Discoverer senior Ernest Hausmann caught a 37-yard pass on the next Columbus drive that earned CHS its first first down not gained by a penalty but that drive stalled on the next play when Kyrell Jordan came underneath Blake Thompson for his first interception of the night.

Columbus only made it into Bellevue West territory one more time.

Second quarter touchdowns included Dae'vonn Hall on a 17-yard pass from Johannsen, Helms his third on a 38-yard catch down the middle of the field and Richardson from 7 yards out as the first half clock expired.

Helms caught six balls for 202 yards. Columbus ran for negative-1 yard overall. Liam Blaser was held to 14 on six carries. Quarterback Brody Mickey was 4 of 14 for 72 yards with two interceptions. Hausmann had one other catch besides the 37-yarder and had 40 yards total. Rylee Iburg caught two passes for 36 yards including one for 29 that took CHS past the 50 in the second quarter for the final time in the game.

The win gives Bellevue West the district title. Columbus will finish second in the district and earn an automatic bid into the playoffs as well.

The only question now is where will CHS start the postseason. Friday's loss was a hit to homefield hopes, but Columbus can restore those next week against North Platte.

"We just have to flush this one as fast as we can," Williams said. "We've got a lot of football in front of us. We've got North Platte coming to town and a chance to possibly host a playoff game if we get them. That's going to be our focus."

If there's been a song playing on repeat in the Columbus High locker room this week it might be Tom Petty's 1989 hit "I won't back down." 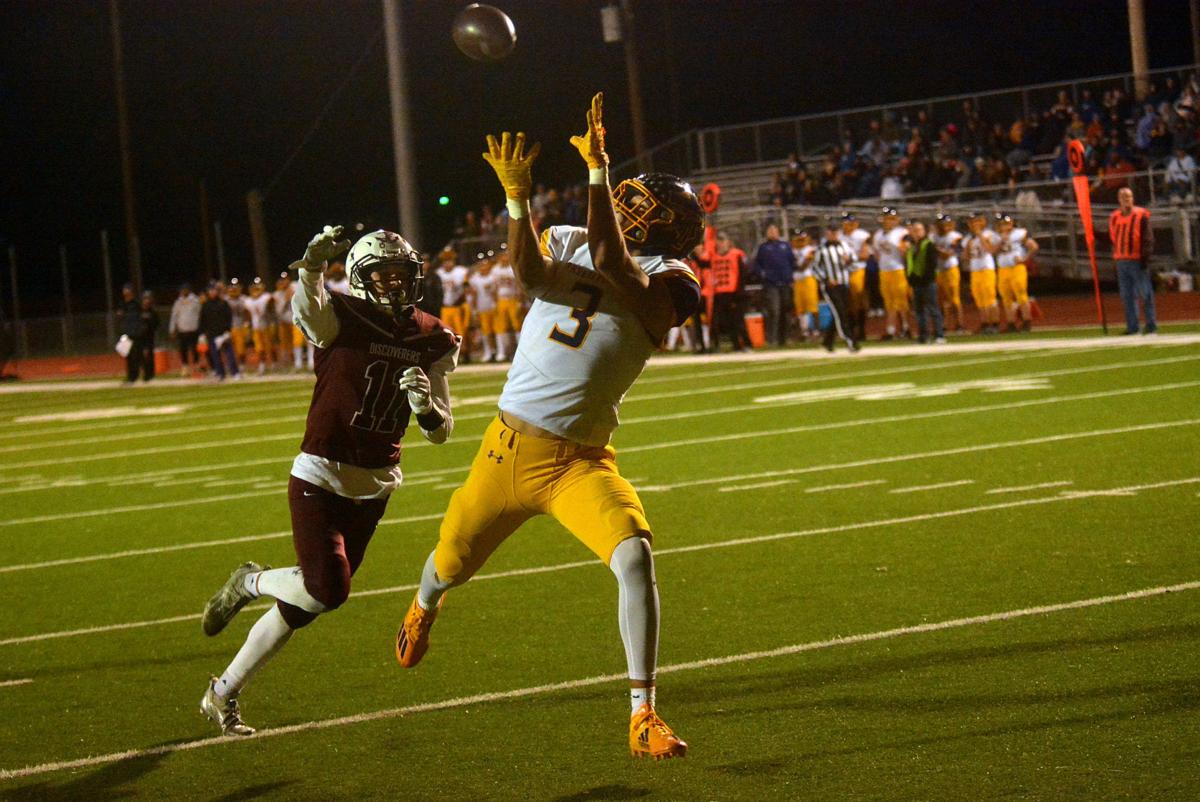 Bellevuew West senior Kaden Helms pulls in one of his three first-half touchdown catches on Friday in Columbus. Helms scored on plays of 64, 37 and 38. 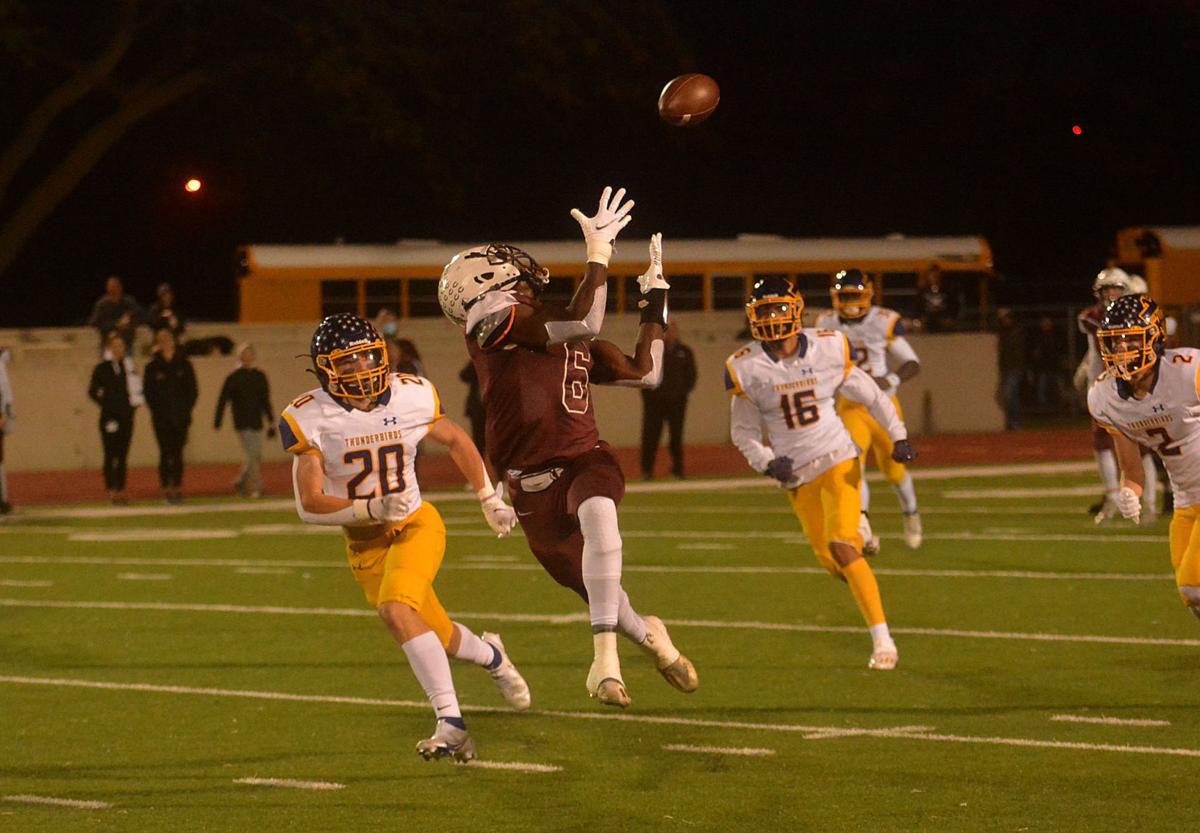 Columbus High senior Ernest Hausmann races past the Bellevue West defense for a 37-yard catch in Friday's home game against the Thunderbirds.

Liam Blaser finds some running room on Friday at home against Bellevue West while teammate Jaden Williams provides a block to open up the hole.

Columbus quarterback Brody Mickey looks for an open receiver on Friday at Pawnee Park against No. 2 Bellevue West. 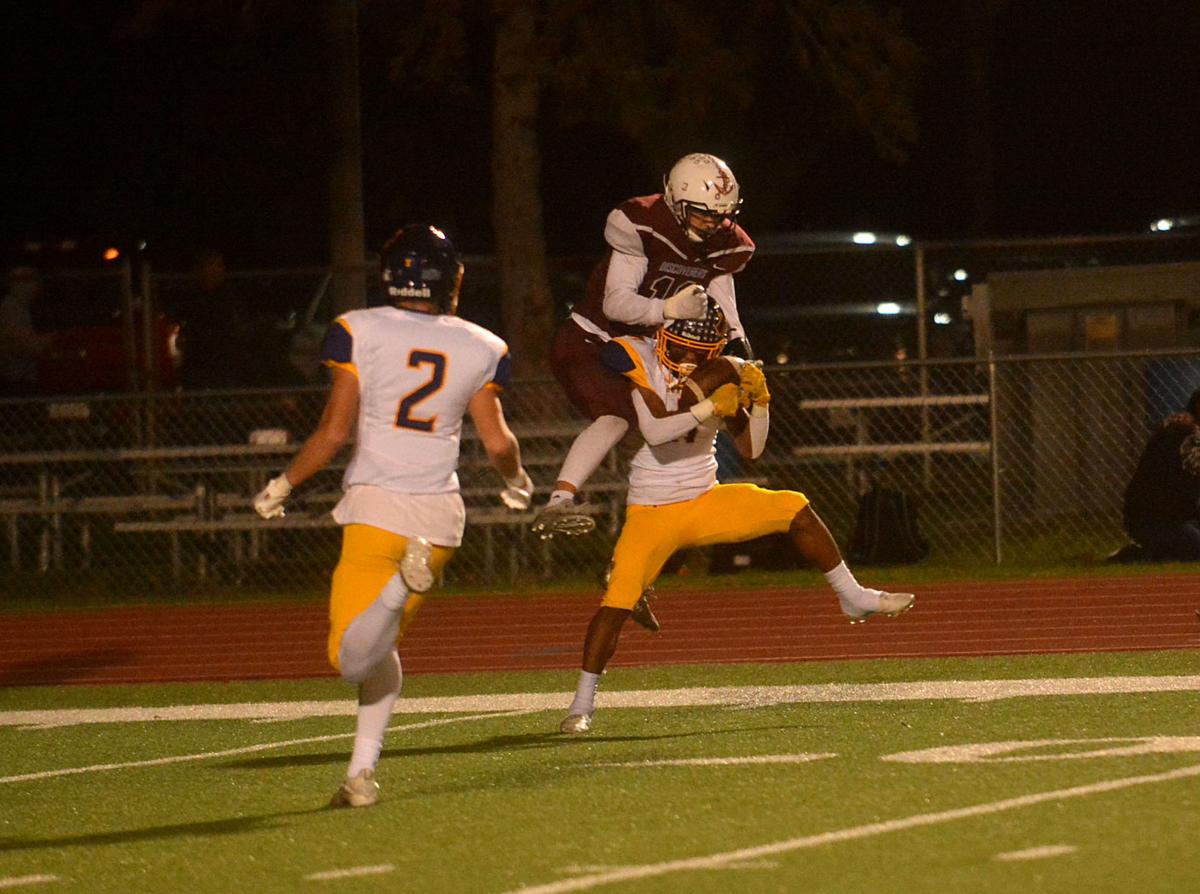 Bellevue West defensive back Kyrell Jordan fights off Columbus receiver Blake Thompson for an interception on Friday in Columbus. Jordan picked off two passes on the night.

Bellevuew West sophomore receiver Dae'vonn Hall makes a 17-yard touchdown catch to put the Thunderbirds up 35-0 on Friday in Columbus.