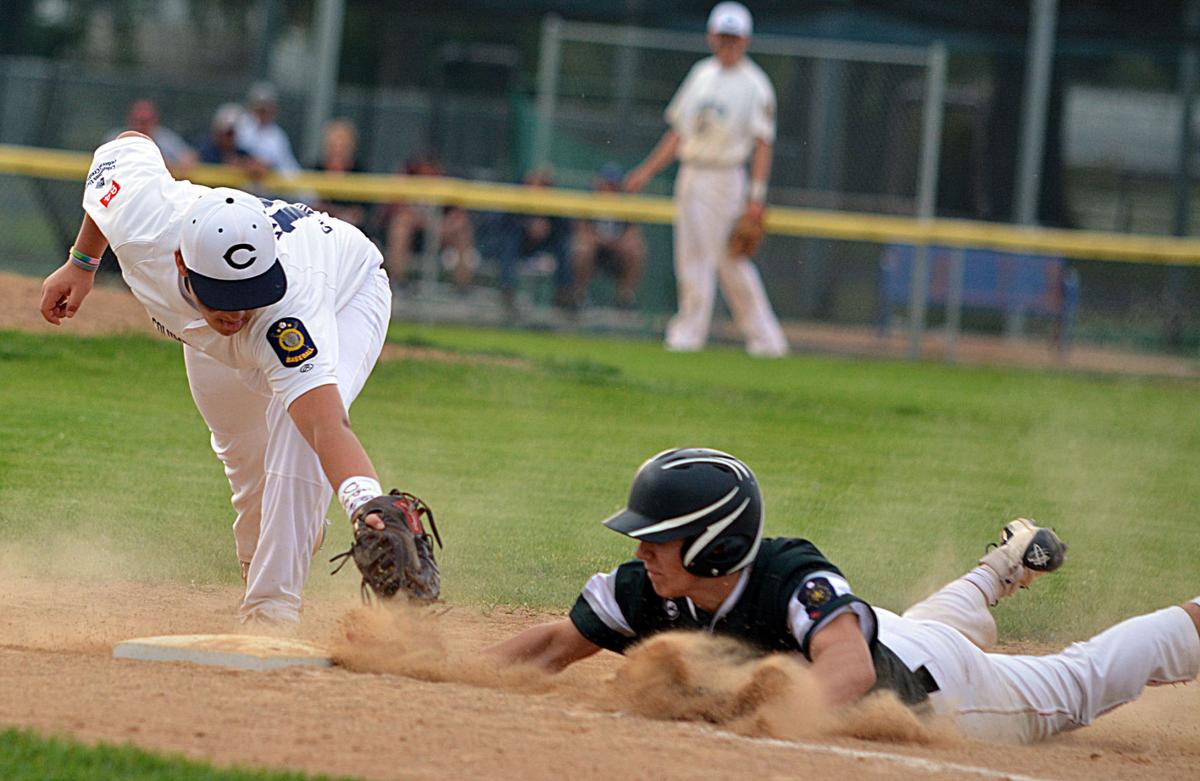 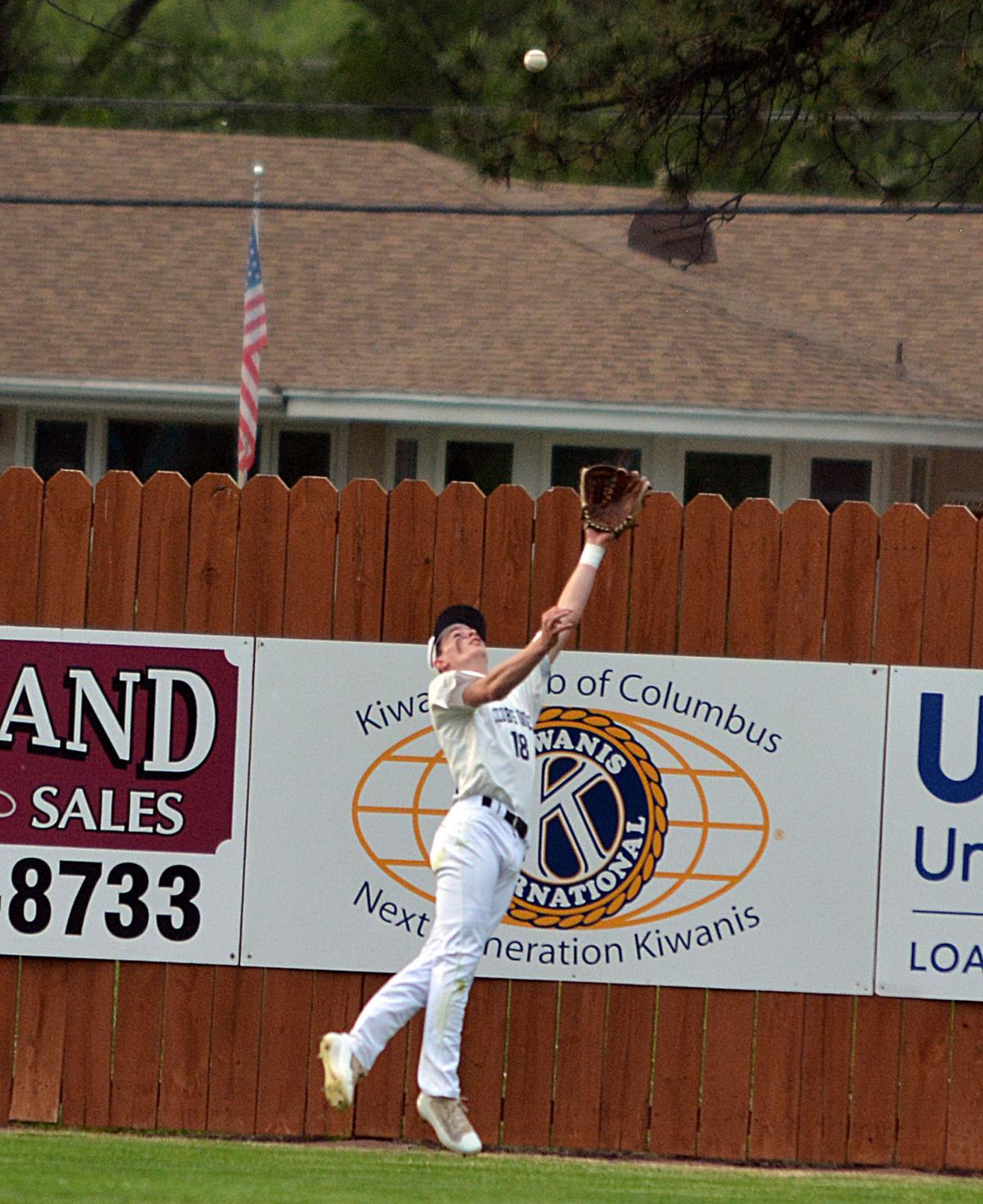 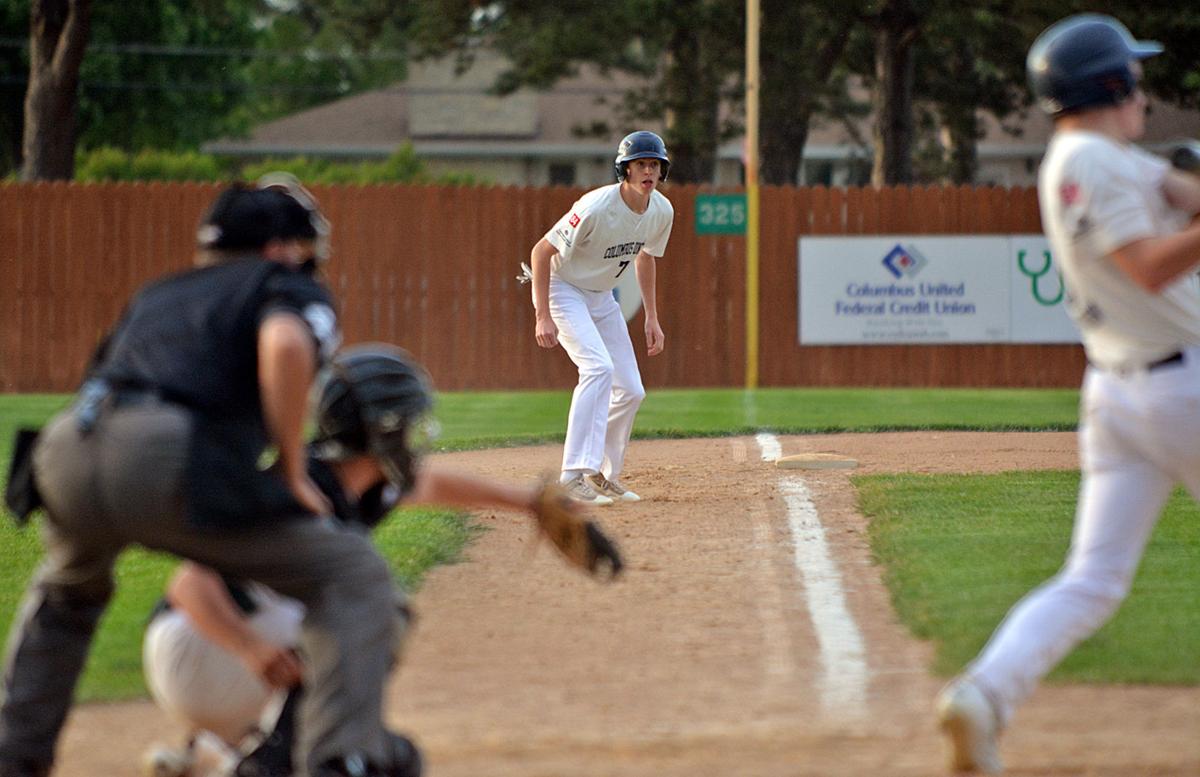 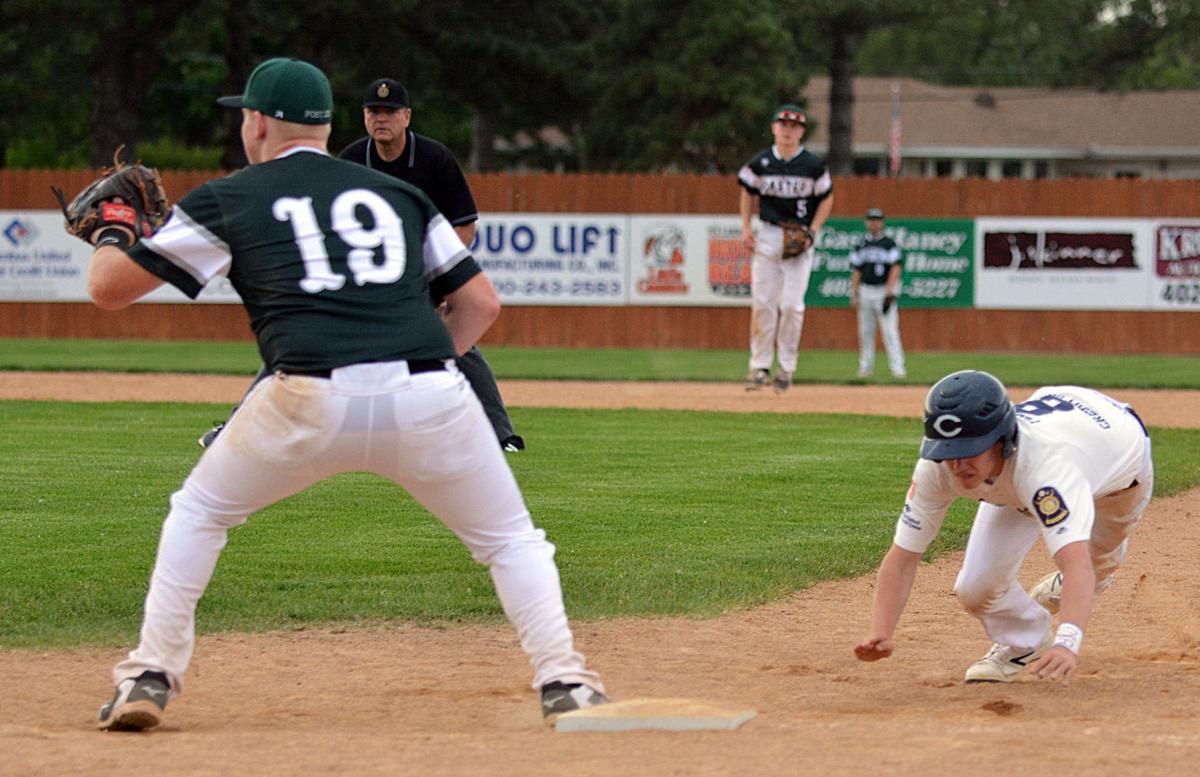 Columbus United Federal Credit Union Junior Blues' Connor Dush, right, dives back to first base on a pick-off attempt during Game 1 of Thursday's doubleheader against Gretna at Pawnee Park Field. 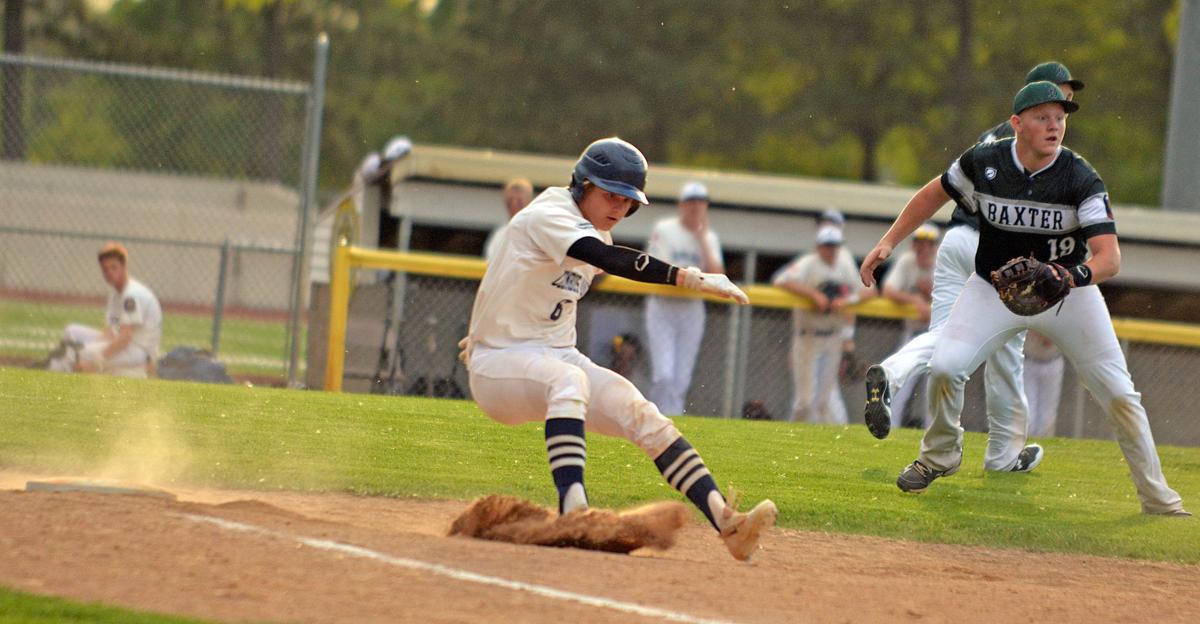 Columbus United Federal Credit Union Junior Blues' Eric Mustard (6) returns to first base after getting a hit against Gretna on Thursday at Pawnee Park Field. 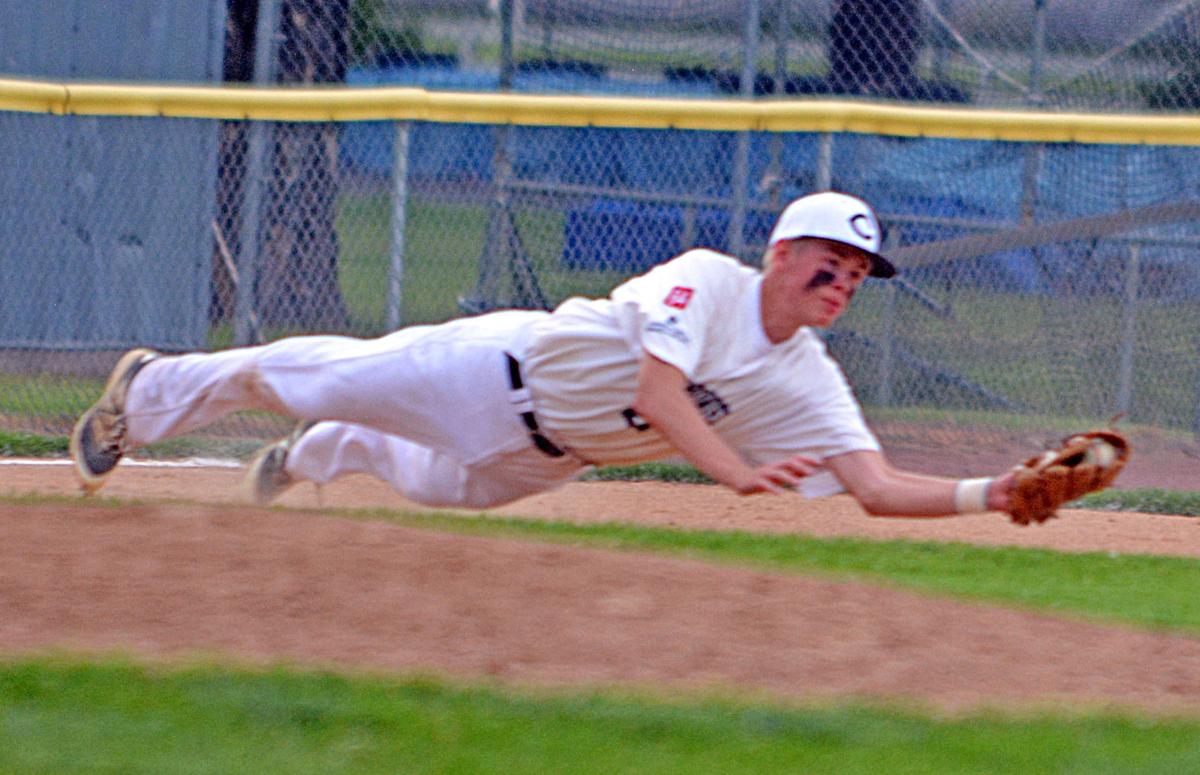 COLUMBUS — A pair of Gretna errors in the seventh inning of Game 2 salvaged a doubleheader split for the Columbus United Federal Credit Union Junior Blues on Thursday at Pawnee Park Field.

After losing 11-4 in Game 1, the Junior Blues showed some resolve in the nightcap to get the 4-3 win.

“I think it’s good for us to see ourselves beat a team that’ll challenge us for our district,” Junior Blues head coach Jimmy Johnson said. “That’s a huge step with how we finished that second game.”

Columbus held the hot Gretna bats without a run through five innings in Game 2 with Connor Dush on the mound.

The defense matched Dush’s success with no errors through five frames as the Blues took a 2-0 lead.

“Sometimes our bats didn’t show up tonight the same way they did against Kearney and Hastings. Pitching and defense thankfully did it for us the second game,” Johnson said.

Gretna got its first run in the top of the sixth on a one-out single from Caden Opfer and a Columbus error that followed. The visitors carried that momentum into the seventh inning, when Gretna recorded three of its six hits.

Dush gave up the first two hits and a sacrifice fly that tied the game at two-all before leaving the game.

“Connor pitched a fantastic game, especially since we know those guys can really swing it. We saw it in the first game and he shut them down,” Johnson said. “The name of the game is throwing strikes and Connor does a great job of that.”

Tyler Wessel came in for closing duties with two outs and the top of the order up for Gretna.

On his first pitch, Blake Grimm hit a rope to left field to give Gretna its first lead of the game at 3-2.

Wessel escaped the jam with no further damage thanks to a diving catch from third baseman Landon Thompson in foul territory.

The Columbus offense started the comeback with an Eric Mustard single to lead off the bottom of the seventh.

After stealing second base, he made his way to third on Colby Gilson’s sacrifice fly.

With two outs, Dalton Borchers hit a fly ball right at Gretna’s Joe Weis, but the ball fell out of the right fielder's glove, allowing a run to score and tie the game.

Cole Wilcox singled in the following at bat to put runners on the corners with Tyler Palmer due up.

On a 2-2 count, Palmer hit a hard line drive at the Gretna third baseman, which forced an error that brought in the game-winning run.

“It didn’t quite work out the way we thought it would, but we’ll still take it,” Johnson said. “I’m really proud of the boys' competitive spirit and finding a way to finish that second game.”

Gretna scratched across two runs in the third, one run each in the fourth and fifth, three runs in the sixth and four in the seventh.

Columbus used a trio of pitchers in the contest, with Mustard getting the start. He gave up four runs on six hits and walked three in 4 2/3 innings of work.

Alex Ritzdorf followed on the mound with a brief appearance. He gave up six runs, five hits and two walks while striking out one in 1 1/3 innings.

Caden Pelan closed the game in the seventh inning by giving up a run and two hits.

The Columbus bats tallied four hits, with Mustard, Curtis Briggs, Borchers and Gilson getting one each.

The Junior Blues (3-1) are scheduled to play a doubleheader at noon and 2:30 p.m. Sunday in North Platte.

An advocate with the Commission for the Deaf and Hard of Hearing says Paul Ruff has an actionable complaint after his loss at the NSAA state wrestling tournament.

CHS senior girls say it was all worth it

Norfolk Public Schools has been placed on probation after a racial slur toward the Omaha Northwest girls basketball team came from the high school’s student section during a Feb. 12 game.

Columbus High wrestling coach Adam Keiswetter is the picture of stoicism at the corner of the mat. Like other coaches, he's hollering instruct…

The parents of three girls who play softball or basketball or both at Bennington High School have filed a federal Title IX lawsuit alleging boys' sports get favorable treatment.

OMAHA - Perhaps it wasn't the exact ending Ben Kamrath imagined for his wrestling career, but the alternative was unthinkable. The Scotus Cent…

OMAHA - Cross County/Osceola will only ever have one first-time champion. Junior Cameron Graham holds that distinction following his run to th…

What did Columbus High swimming coach Alyssa Dillon expect out of her team during her second year of leadership? To be honest, she'd tell you …

Columbus United Federal Credit Union Junior Blues' Connor Dush, right, dives back to first base on a pick-off attempt during Game 1 of Thursday's doubleheader against Gretna at Pawnee Park Field.

Columbus United Federal Credit Union Junior Blues' Eric Mustard (6) returns to first base after getting a hit against Gretna on Thursday at Pawnee Park Field.