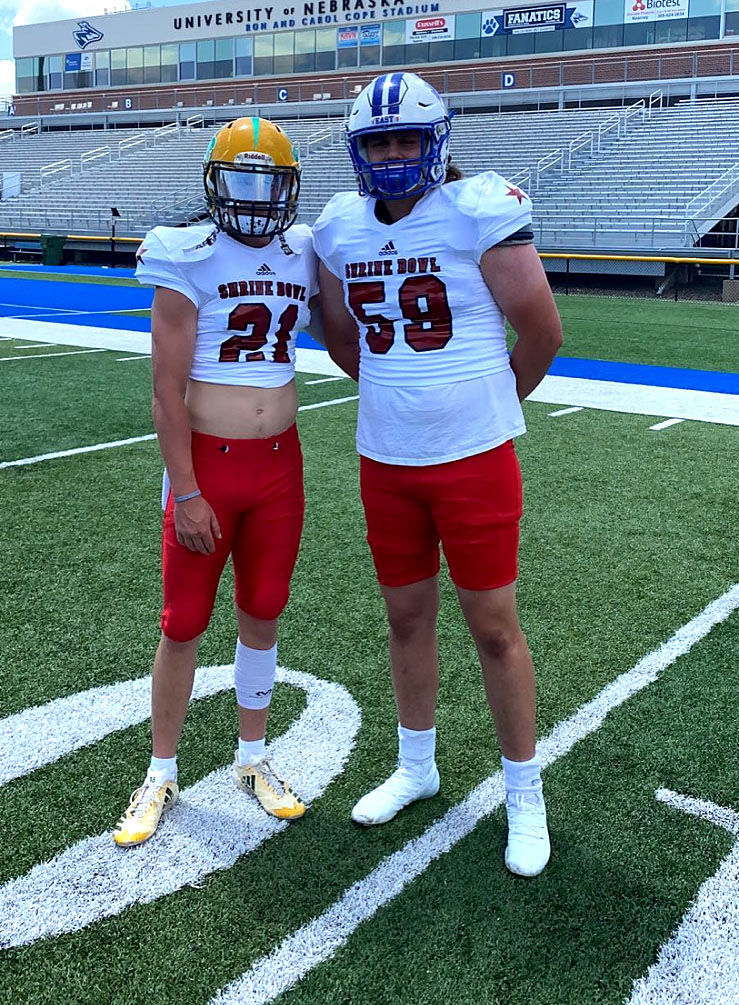 Scotus Central Catholic's Tyler Palmer poses for a photo with South teammate Jett Janssen, right, during preparations this past week for the Shrine Bowl. 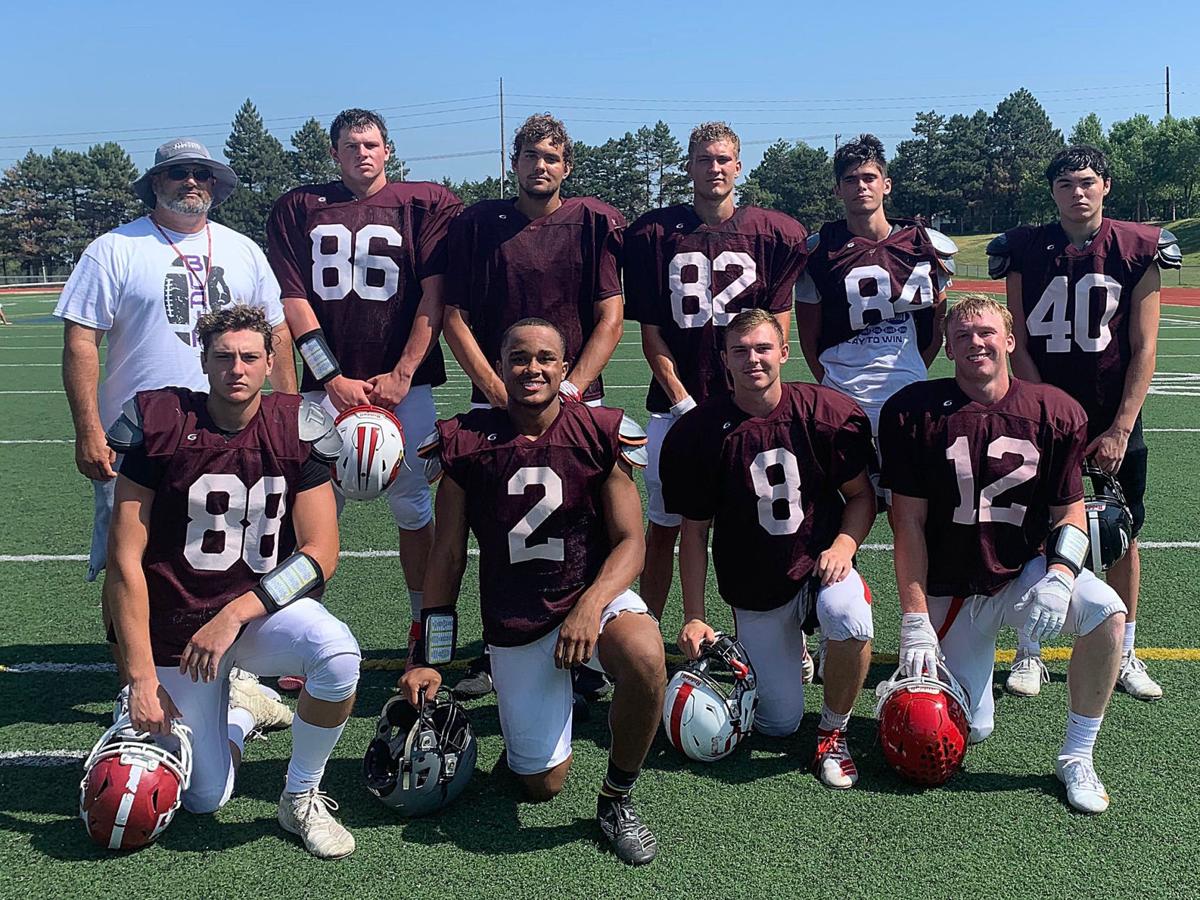 Columbus High's Landon Thompson (82) takes a photo with some of his North teammates and coaches this past week after a practice for Saturday's upcoming Shrine Bowl. 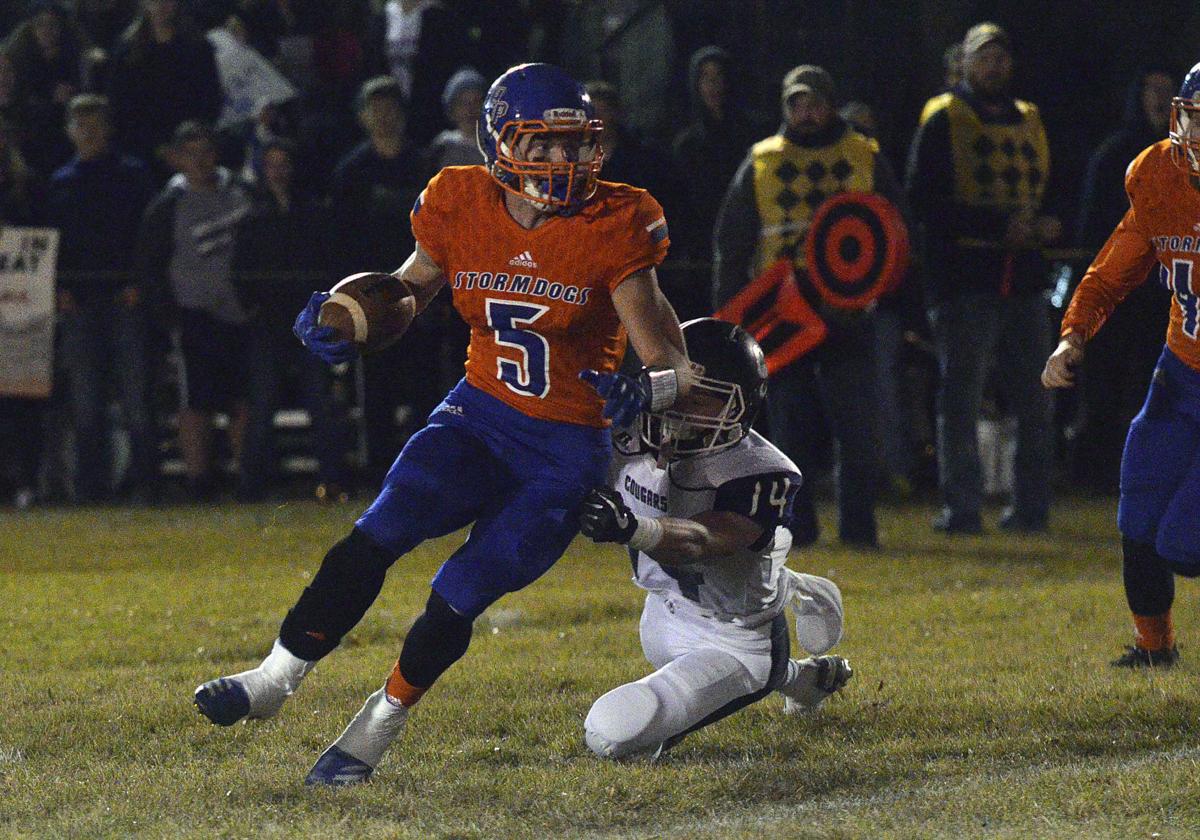 Keaton Van Housen gets past a Cross County last year. Van Housen will play in the Shrine Bowl on Saturday.

Three local athletes will bring a sense of normalcy back to the sports world on Saturday when they play in one of the first football games since the global pandemic.

Tyler Palmer of Scotus Central Catholic, Landon Thompson of Columbus High and Keaton Van Housen of High Plains Community were selected for the most prestigious high school football game in the state of Nebraska - the annual Shrine Bowl.

The Shrine Bowl has been around for 62 years. The 2020 game was initially delayed but will take place Saturday in Kearney with 90 players split between a North and a South roster.

"It's super humbling knowing that I think we're the first football game in the nation since all this COVID happened," Palmer said. "I think it's just awesome being a part of this."

Shriners Hospitals for Children is a hospital system with locations throughout the United States, Canada and Mexico, including 18 orthopedic hospitals, three burn hospitals and one hospital providing orthopedic, burn and spinal cord care. All 22 Shriners Hospitals are dedicated to providing advanced, specialized care to children under the age of 18, free of charge.

Most of Palmer's summer has been preparing for his first baseball season at Nebraska with a club team. Playing football for a week has been a nice change of pace, according to the future Husker.

The players arrived in Kearney on Monday and have spent the week practicing and attending activities before the game is played on Saturday.

In five days time, players have to learn a new offense and build chemistry with teammates.

"You definitely don't have that much free time," Palmer said. "That's the way we like it. We have two practices a day and we participate with the Shriners and do some things for them. We do some team outings. It's really awesome."

Thompson is also excited about the opportunity to compete against the best in Nebraska.

Before he makes UNK his home for the next four or five years, Thompson will be one of the first athletes in American to play a football game since the virus hit in March.

"I think it's awesome," Thompson said. "Just being the only game in the country and being able to play the sport we all love, it's a great time."

The Shrine Bowl is an award that includes numerous off-the-field experiences. Cramming it all into a week with two-a-day practices can make it a difficult six days. But, Palmer is embracing the challenge of getting to know new teammates and new plays.

After starring at quarterback for the Shamrocks this fall, he's been moved to wide receiver for Saturday's game.

"My favorite part is getting back on the field, being able to make some contact again and getting to run the ball a little."

Palmer and Thompson are on different teams. The practice at different locations and haven't seen much of each other. Before Palmer joined the South roster, he only knew three or four Shrine Bowl teammates.

Regardless, those new faces have become fast friends. Most of Palmer's teammates congregate in the hotel lobby every evening for conversation and story telling.

"It's been really good meeting a ton of new people," he said. "I've met some people I would have never expected to meet from Western Nebraska and smaller schools that bigger schools will never meet. It's kind of like a big brotherhood. We just all play football and all love the sport."

Thompson will also be playing wide receiver after making the switch to the position his senior year. He said getting noticed after only one season as a wideout only adds to his appreciation of being invited.

"It means a lot to me," Thompson said. "To show that I have the skills to come out here with all these great athletes, I think it helps me for next year when I play for Kearney."

While all the players are excited to get on the field on Saturday, they realize they are playing for more than just themselves. The proceeds from the game go to the Shriners Hospital.

Kickoff is scheduled for 2 p.m. on Saturday at the University of Nebraska-Kearney.

Palmer added he hopes everyone tunes in to watch him and Thompson play one more time and consider making a donation to the cause.

Viewers can watch the game on NET online or on television for the broadcast.

"I hope people tune in," he said. "It's great that we get to play and people finally get to watch some football again. I'm glad we got to give that to football watchers all across the nation."

Reaching for perfection: Reds closing in on unbeaten season

Intent on proving their mettle in Class A and with the potential to cap the most prolific scoring career in program history, Columbus High boy…

The Columbus Cornerstone Insurance Group Seniors will be looking to find the win column again when the season wraps up Thursday in Grand Island.

Lakeview basketball struggled with consistency in the second year under head coach Tyler Colvin. The Vikings often suffered from self-inflicte…

A special Nebraska School Activities Association Board of Directors Zoom meeting has been called for Monday, but NSAA executive director Jay B…

There are many added layers to high school sports moving forward throughout the country, including Nebraska, this fall.Safety protocols, schoo…

Bank of the Valley wins 2 of 3 in final weekend

SOS streaks to six in a row

Baseball teams across the state will lament the lack of a postseason this year for obvious reasons. Few will have the same kind of disappointm…

Scotus Central Catholic's Tyler Palmer poses for a photo with South teammate Jett Janssen, right, during preparations this past week for the Shrine Bowl.

Columbus High's Landon Thompson (82) takes a photo with some of his North teammates and coaches this past week after a practice for Saturday's upcoming Shrine Bowl.

Keaton Van Housen gets past a Cross County last year. Van Housen will play in the Shrine Bowl on Saturday.