Scotus senior Amber Buhman shows off her balloons and poster given to her by journalism advisor Angie Rusher after Buhman won a Class B state championship in news feature photography. 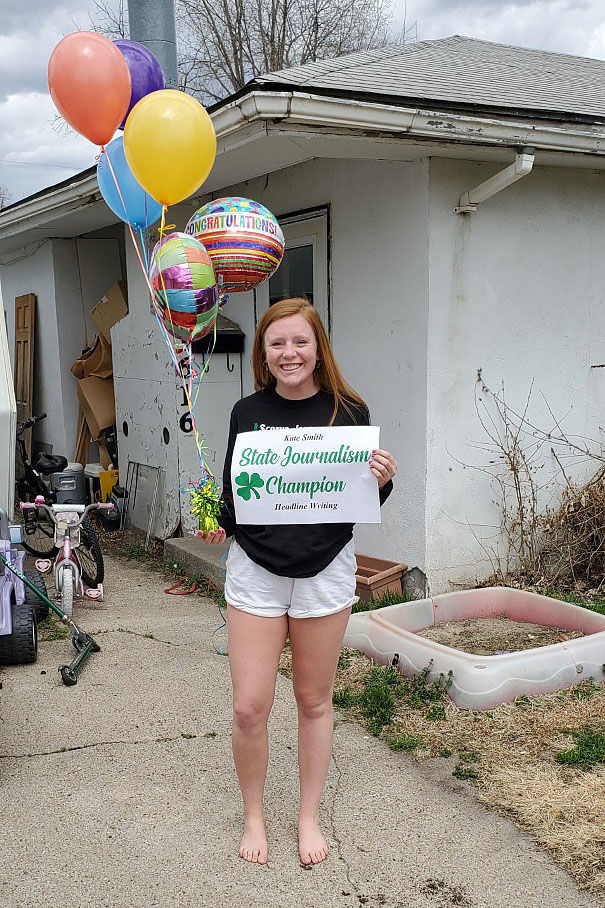 Scotus senior Kate Smith was surprised at her home with balloons and a poster by her journalism advisor Angie Rusher after winning a Class B state championship in headline writing.

Scotus journalism advisors and students came together on a Zoom call last month to watch the results come in from the state journalism championship. 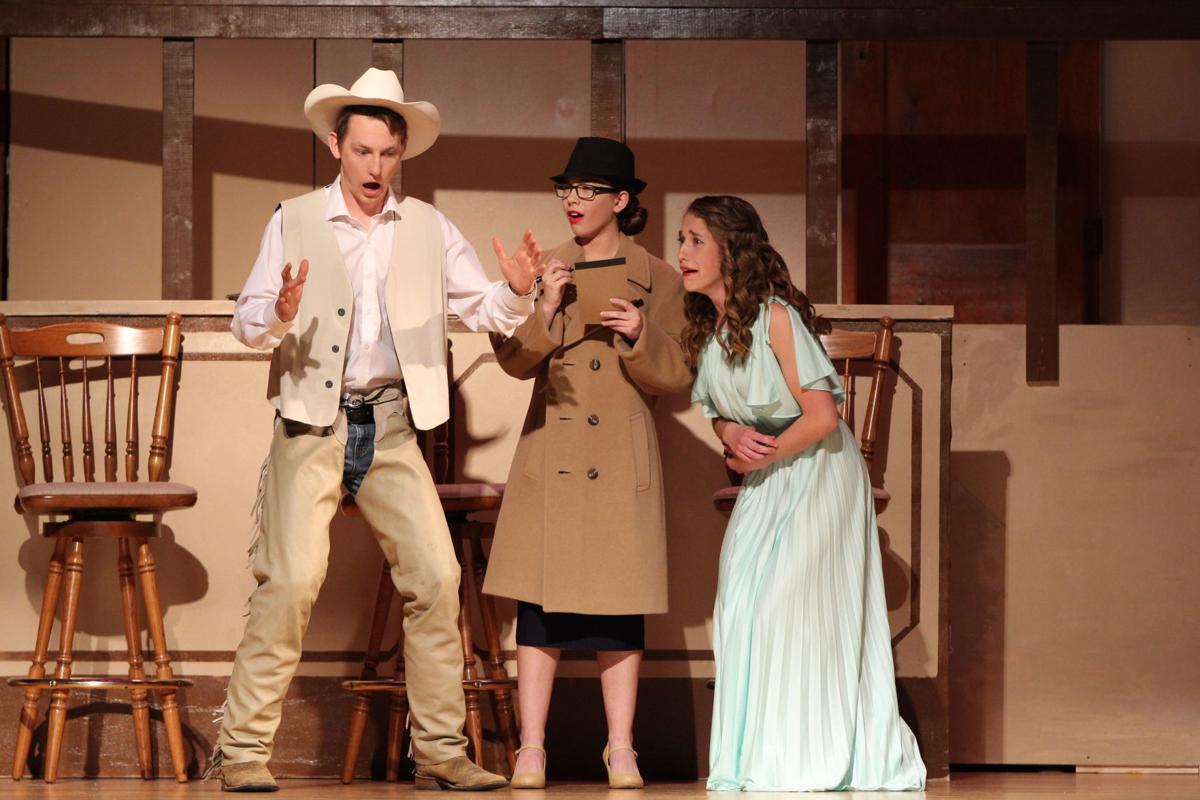 One of the three feature photos submitted by Amber Buhman that won her the Class B news photography state championship was of the 2019 Scotus spring play.

While spring sports and activities were officially canceled for the season, one group of students were able to compete and see their hard work pay off.

Journalism students from across the state were awarded placings and state championships on a virtual state meet held on April 27. Scotus Central Catholic placed fourth overall in Class B among 31 other schools.

Scotus was 22 points behind Elkhorn Mount Michael for third place. Scottsbluff was crowned Class B state champions with scoring in 18 of 26 categories. Scotus produced points in 14 categories and had multiple medal winners in five categories.

The Scotus Journalism students, which include the "Rock Bottom" newspaper and yearbook staff, came together on that Monday during a Zoom call to watch the results together.

“I screamed so loud, I think my Zoom microphone was off, but I screamed so loud I think I shook my house," Smith said when she learned she was a state champion. "My sister was freaking out. She was watching it with me, and she congratulated me right away."

In a normal year without a pandemic, Scotus Journalism students would have gathered together at Northeast Community College on that Monday to compete in 13 categories. Participants have until March 1 to submit their work. Half of the categories are judged for finals while the other half are considered preliminary entries.

The top eight in those categories then meet in Norfolk to go head-to-head in writing, advertising, cartooning and other events with similar content to draw from.

Of course, because of the coronavirus pandemic, there was no in-person competition this season. All the work submitted was judged for final results.

As the results were released for each category, the full list of the top eight was revealed.

Buhman had a suspicion she was headed for a medal after one of her photos was featured on the video montage at the beginning of the event. But she wasn't totally compared to see her name listed as a state champ.

Also a volleyball and basketball player, track athlete and the only Scotus student in both newspaper and yearbook, Buhman set out her senior year to win a title.

“It’s definitely super exciting. I took pictures at every event possible this year, so it was with the goal in mind to win a state championship," she said. "I probably put as much time into journalism during the school year as my sports."

She enjoys shooting at football games the most because she's on the sideline close to the action doing her best to capture the moment. Buhman has come a long way since just about two years ago when her camera knowledge and photo taking abilities were quite raw.

“It’s definitely been a process," she said. "My first time taking pictures was…not good. It’s been a long time coming."

Smith was initially intimidated when she signed up for the journalism class. She never considered herself much of a writer and struggled at first. But thanks to Assistant Principal and Journalism Advisor Angie Rusher, Smith found her comfort zone - writing headlines.

“Finding titles that fit an article is kind of a creative outlet for me," she said. "I really try to go for unique and creative ways to title a piece."

She's become well-known for her ability to use a pun or a play on words to make a headline jump out. At least two or three headlines in issues of the "Rock Bottom" were thought up by Smith.

She won this year for such titles as: "Upperclassmen 'Waltz' the night away," "Coffee shops to love a 'latte' in Columbus" and "Mustard monarchy rules Scotus again." The latter referred to senior Eric Mustard winning Homecoming King decades after his father, Chris, also had the honor 30 years earlier.

"We have about three people on the staff who, when we can't come up with a headline, we go to Kate," Rusher said. "The kids don't write their own headlines all the time. Kate writes a lot of them for other people."

Rusher has been leading Scotus Journalism and Yearbook since the fall of 2008. When she took over, there had been no school newspaper printed the previous school year.

A former Shamrock herself, Rusher has gradually built the program up from a handful of state entries to now having at least one competitor in most categories. She likes it to track and winning state championships based on a team that can fill most events.

Scotus typically does well in competition the day of the event. In the previous three years, Shamrock designers have swept the top three spots in Newspaper Layout at the state meet. This year, SCC won just one medal in the event, fourth place.

The next step is becoming more adept at shooting and editing broadcast news and sports stories. Scotus offered a video production course this past school year and plans on adjusting and evolving the course for those students seeking experience in broadcast journalism.

The two state journalism titles are the first such state championship banners Scotus has hung in the Dowd Activity Center for its fine arts department.

"It was just kind of survival mode, and the learning curve was just so steep at the beginning," Rusher said. "We've learned a lot, and the Nebraska Press Association has helped a lot.

..."I didn't write for the newspaper in high school or do the yearbook or have any desire to do those things. It's amazing how your life changes."

Cornerstone skid stretches to 7 in loss to Elkhorn

The Columbus Cornerstone Insurance Group Seniors struck out eight times, went 0 for 5 with runners in scoring position and suffered another lo…

Check back Friday afternoon and in Saturday's edition for full coverage of this doubleheader.

Scotus senior Amber Buhman shows off her balloons and poster given to her by journalism advisor Angie Rusher after Buhman won a Class B state championship in news feature photography.

Scotus senior Kate Smith was surprised at her home with balloons and a poster by her journalism advisor Angie Rusher after winning a Class B state championship in headline writing.

Scotus journalism advisors and students came together on a Zoom call last month to watch the results come in from the state journalism championship.

One of the three feature photos submitted by Amber Buhman that won her the Class B news photography state championship was of the 2019 Scotus spring play.