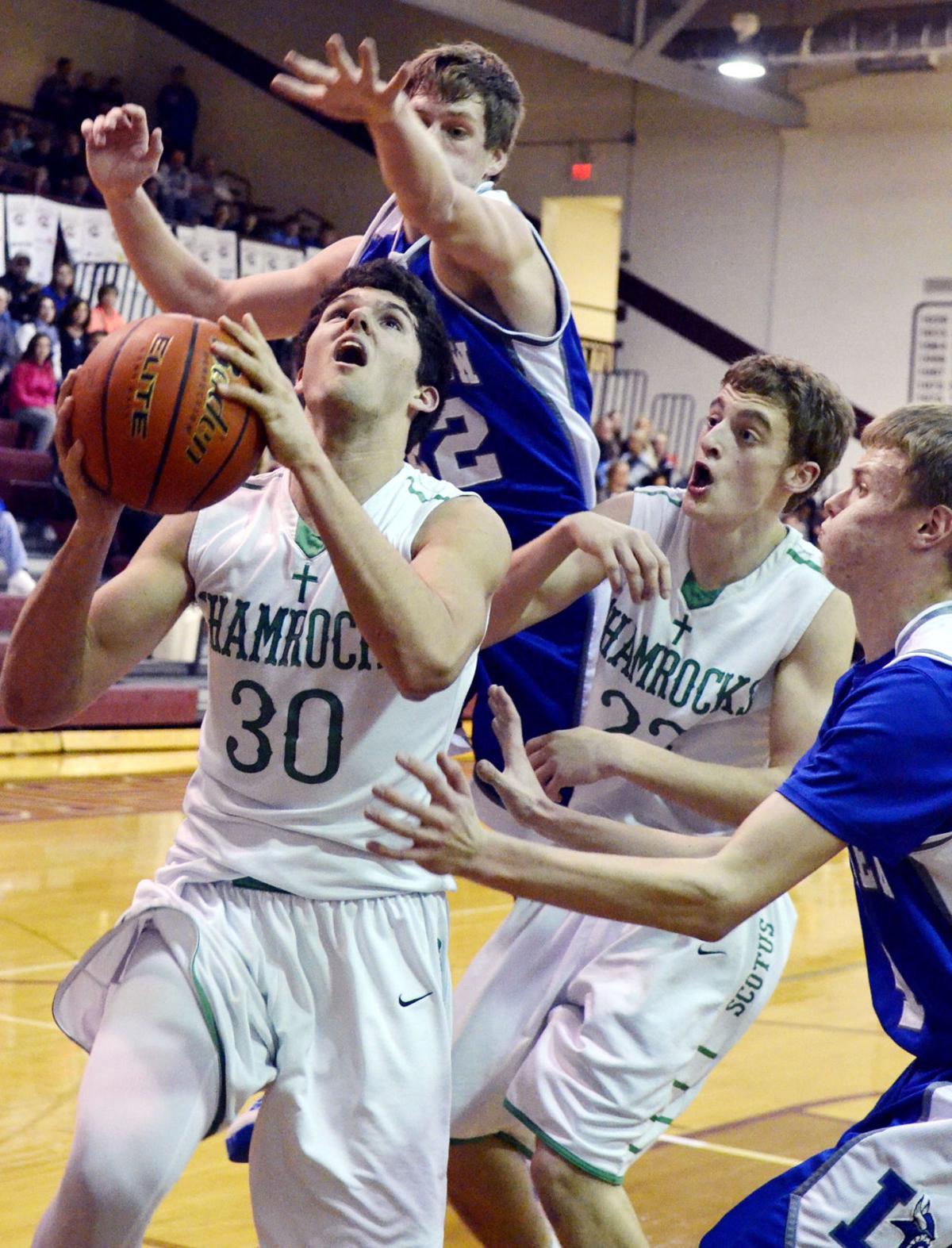 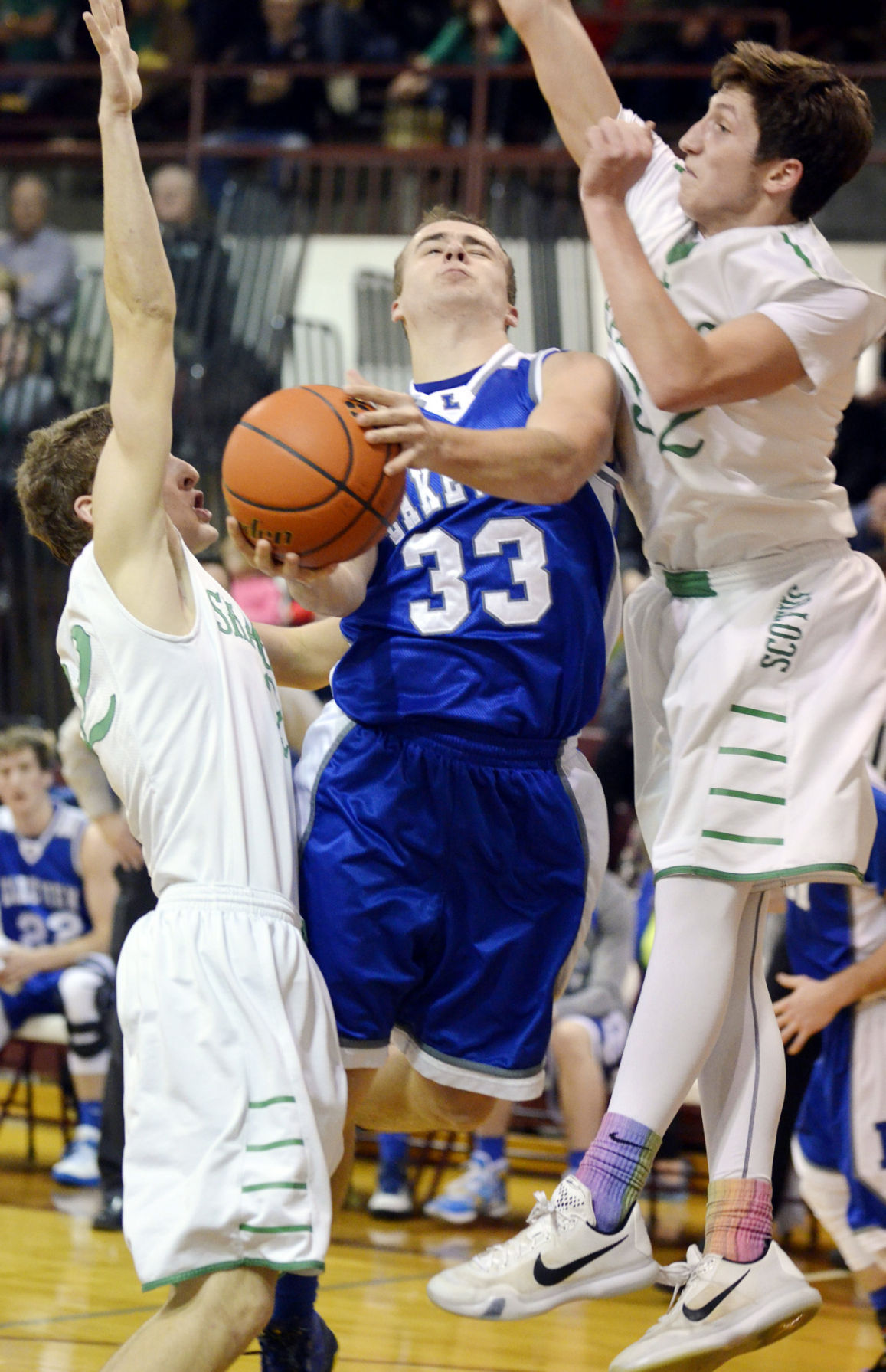 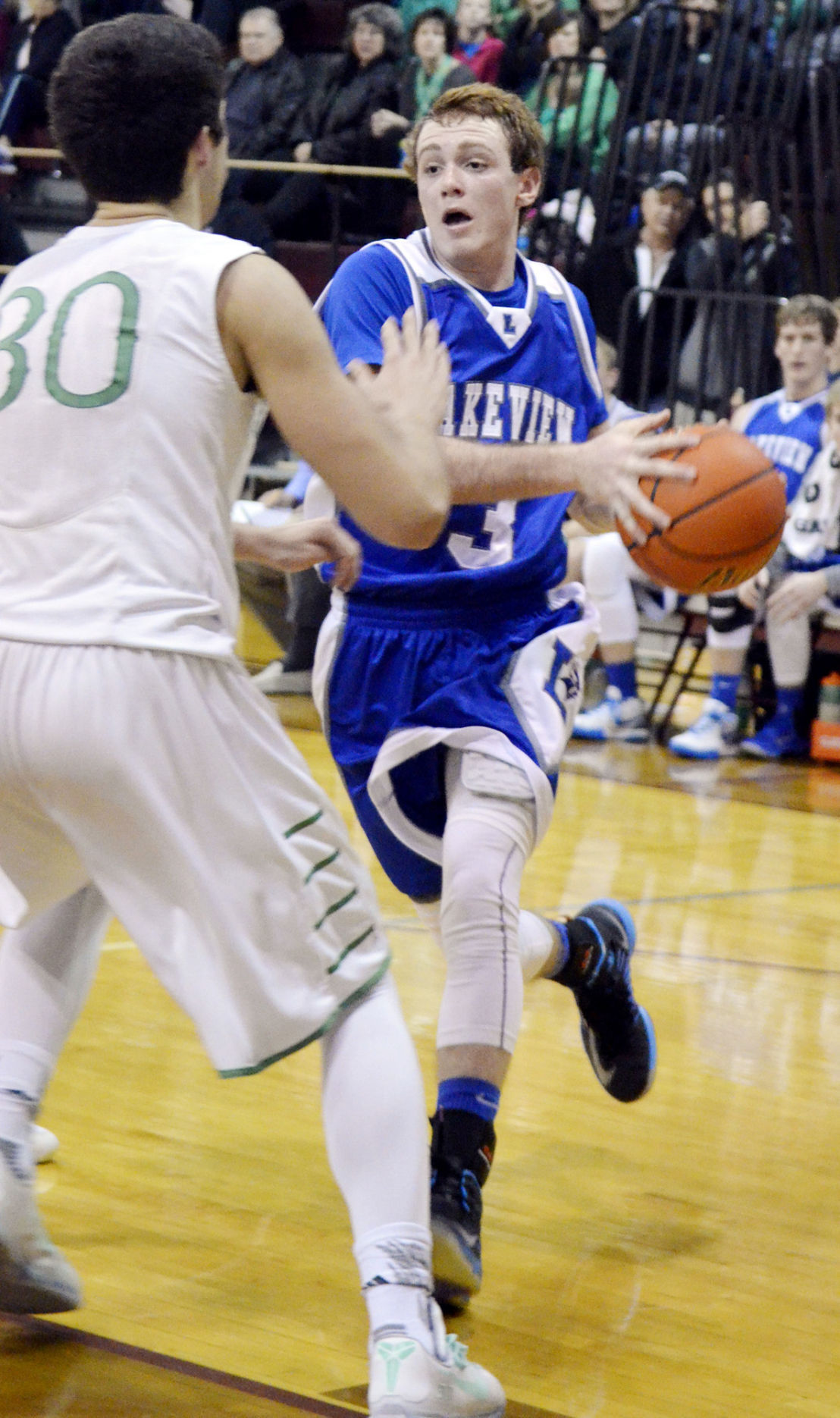 Lakeview's Kyle Grotelueschen goes in for a layup Tuesday during the C1-4 subdistrict semifinals against Scotus at Columbus High School. 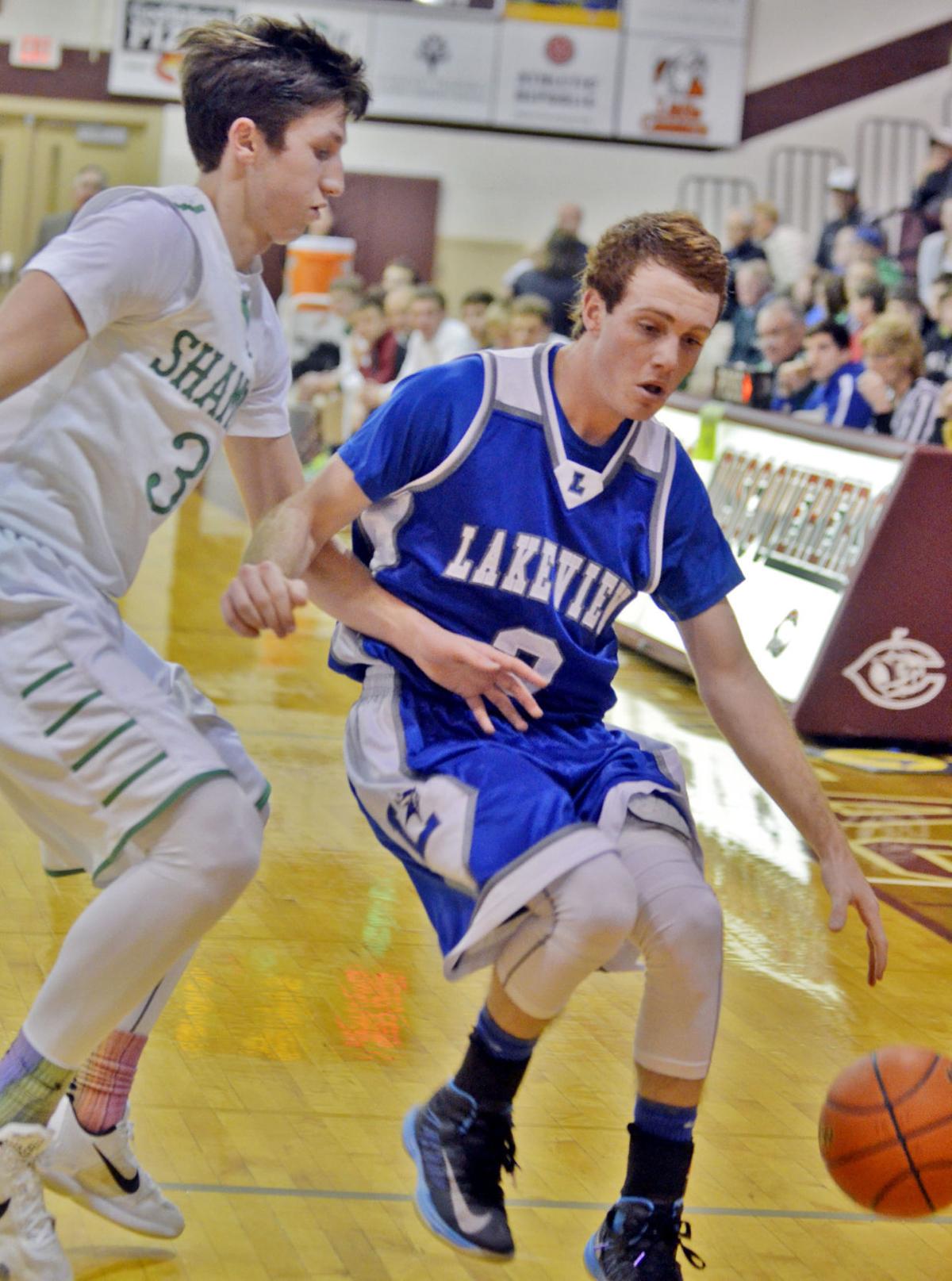 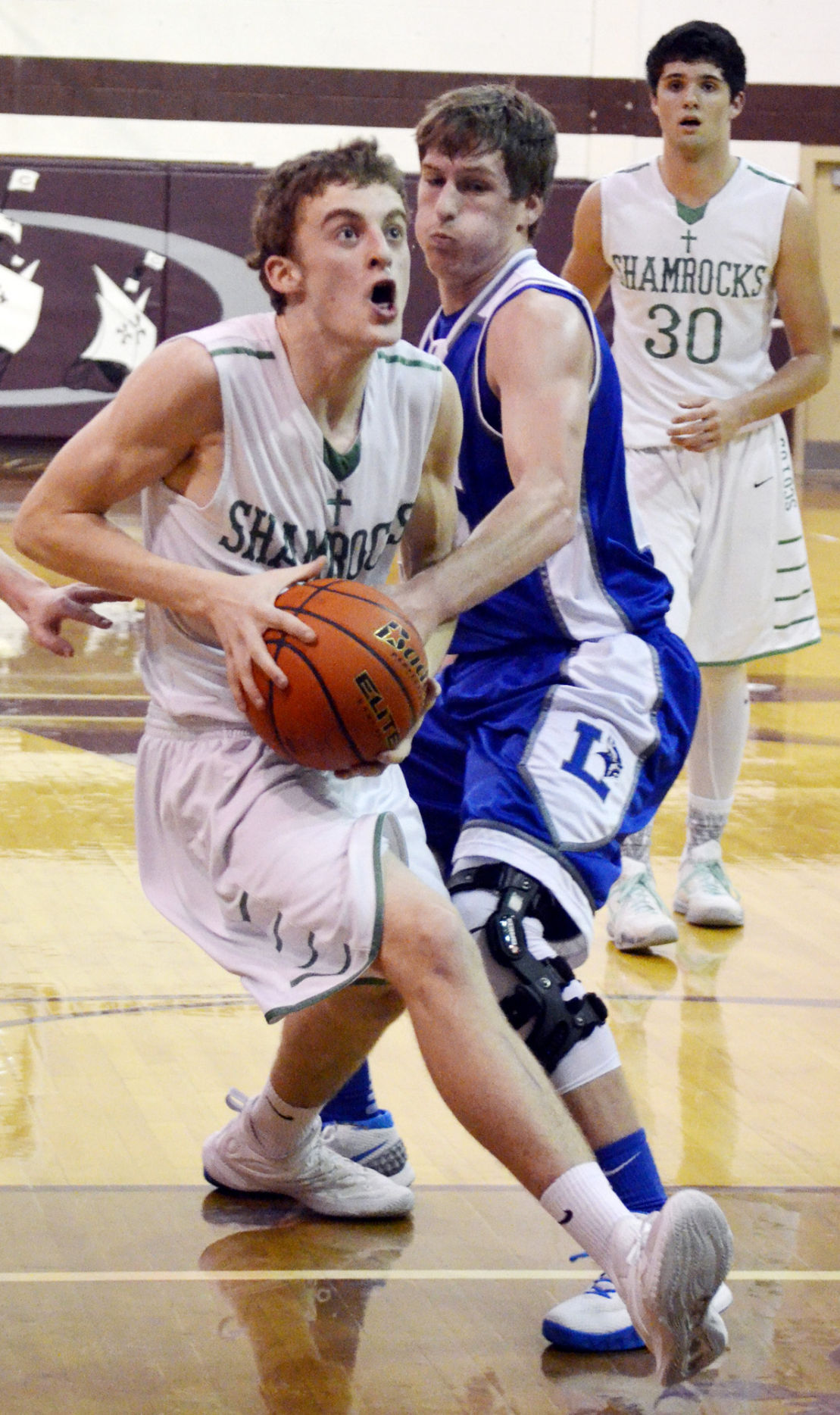 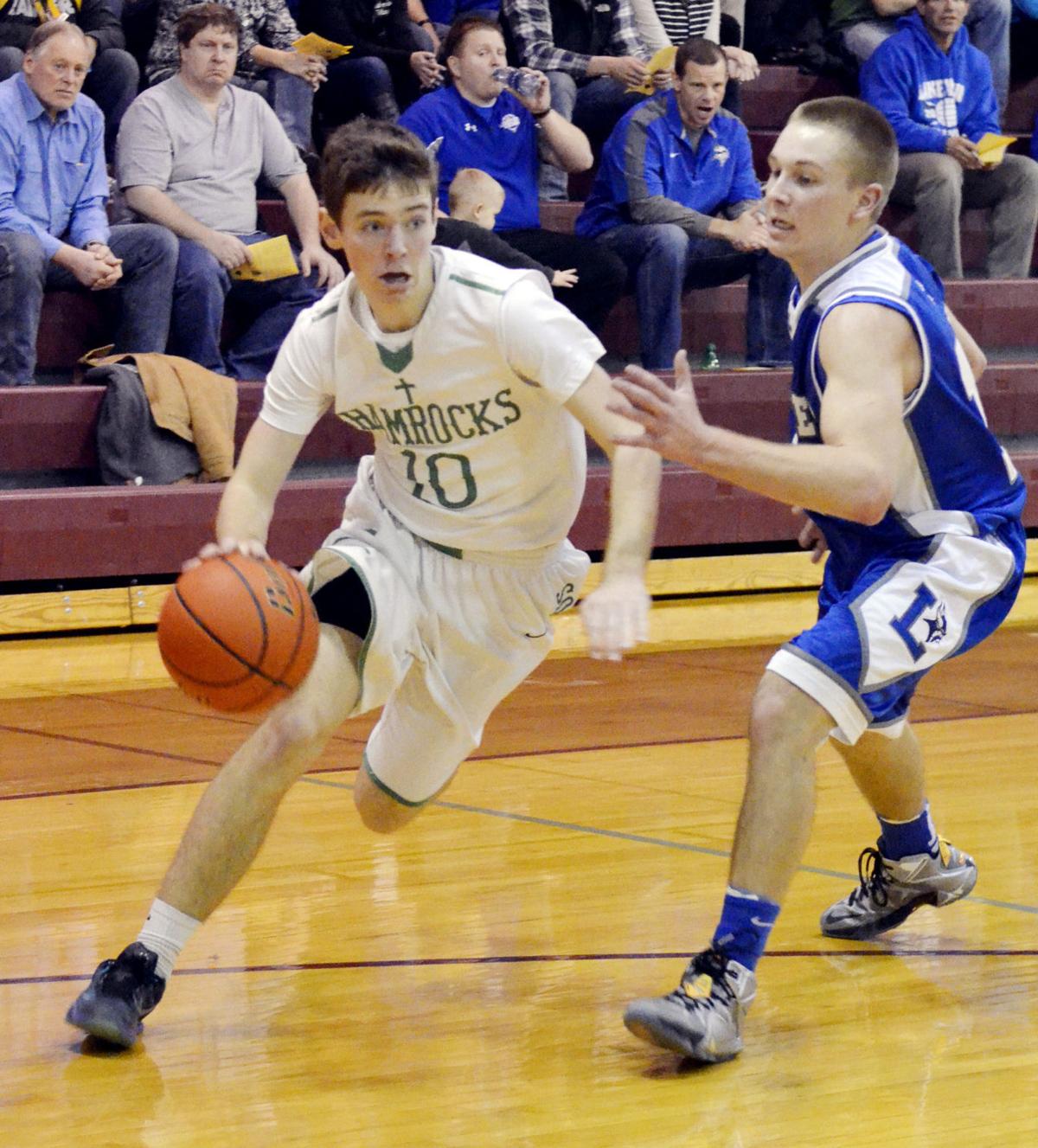 Scotus' Miles Putnam goes up for a layup Tuesday during a C1-4 subdistrict semifinal game against Lakeview at Columbus High School.

Or make that, made for Shamrock center Dalton Taylor, who scored 20 of his game-high 22 points in the final two quarters of Scotus' 56-40 win over Lakeview in the Class C1-4 subdistrict semifinals at Columbus High School.

The win advances Scotus to Thursday's subdistrict final against North Bend, which rallied in the fourth quarter to defeat David City Aquinas 56-43. The 10th-ranked Tigers (22-1) own Class C-1's longest winning streak at 22 games.

Taylor, who added eight rebounds, didn't miss a shot from the field in nine tries in the second half and was 10 of 13 for the game.

He got some extra opportunities thanks to the Scotus defense, which forced 17 Lakeview turnovers, including 11 in the first half. Two of Scotus' first three field goals to open the second half came off turnovers by the Vikings (9-16).

"We have to try to pressure to take Lakeview out of their offense," Scotus head coach Jeff Ohnoutka said. "Lakeview works so hard. There's not a harder-working guy than (Lakeview point guard) Kaleb Lusche. I have a lot of respect for that guy."

Lakeview cut the lead to nine twice late in the third quarter, on Dylan Johnson's field goal and on Kyle Grotelueschen's traditional 3-point play, which trimmed the margin to 38-29.

But Cody Mroczek's field goal on the Shamrocks' final possession of the quarter sparked Scotus on an 8-1 spurt, with six of the points scored by Taylor, to make it 46-30 midway through the final period.

Lakeview came out strong, jumping out to an early 7-4 lead, going up on Grotelueschen's 3-point goal.

Scotus went on an early 10-0 run to pry the three-point lead away. Mroczek sparked the run with a 3-pointer, and Nathan Ostdiek's steal and bucket gave the Shamrocks a 9-7 lead.

"Their pressure sped us up," Roth said

During the run, Lakeview committed turnovers on four of five possessions, and Miles Putnam turned one into a 3-point goal. He followed with a steal and bucket for a 14-7 Shamrocks' lead.

Scotus made 7 of 9 field goal attempts in the first period, including all three of its 3-point tries. For the game, Scotus was 22 of 35 (63 percent) from the field.

"In the first quarter, we had three different players hit 3s," Ohnoutka said. "I liked the way we played then, too, when they let it fly. We've got to be balanced. I think there were times when we turned down shots trying to get it inside."

Scotus' lead grew to 19-11 before Lakeview answered with a 9-0 run. Quinn Matteson, who led Lakeview with 12 points, scored back-to-back field goals, the second from the left baseline to cut the margin to 19-15. Lusche added a field goal on a fall-away jumper, and Ethan Lichtenfeld's 3-pointer gave Lakeview a 20-19 lead.

"We fought hard," Roth said. "The referees called a physical game, which they should in a game like this. It just took us a while to adjust."

Scotus scored the last five points to end the half. Tate VunCannon's pass led to a Mroczek bucket, and VunCannon hit all three free throws after being fouled while shooting a trey.

Lakeview's Kyle Grotelueschen goes in for a layup Tuesday during the C1-4 subdistrict semifinals against Scotus at Columbus High School.

Scotus' Miles Putnam goes up for a layup Tuesday during a C1-4 subdistrict semifinal game against Lakeview at Columbus High School.