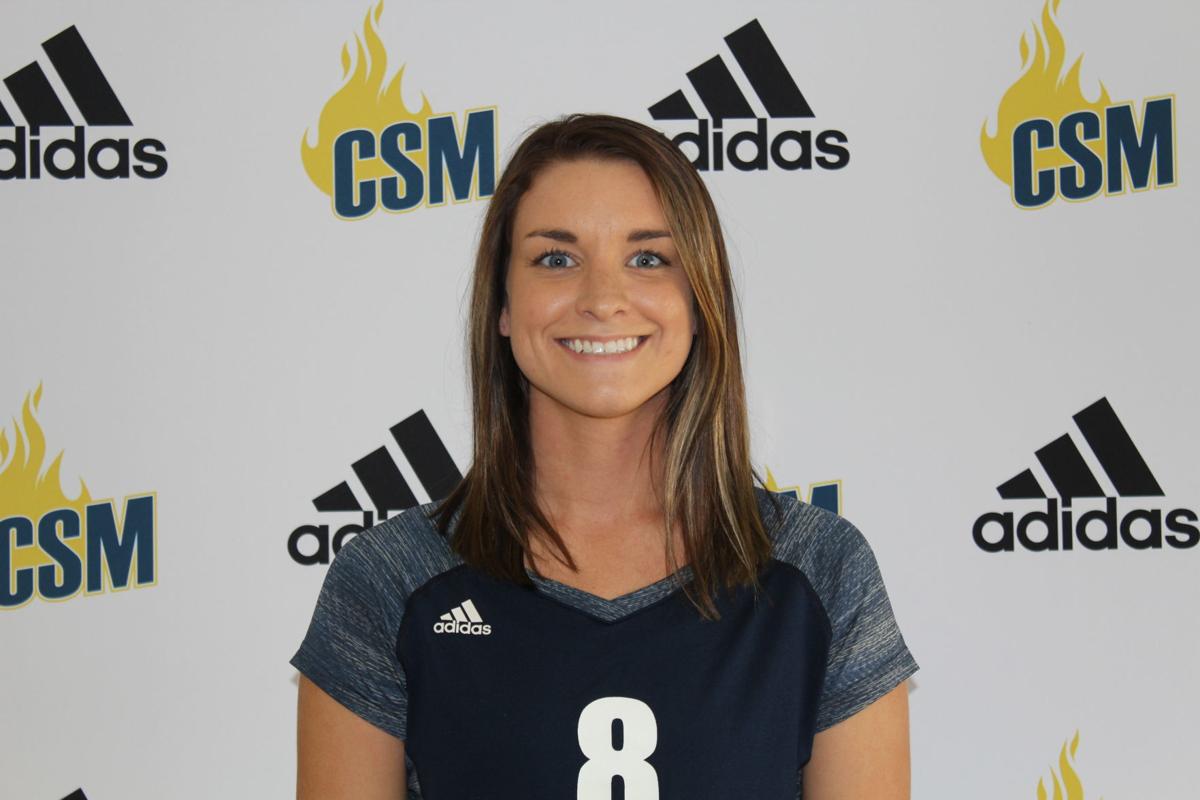 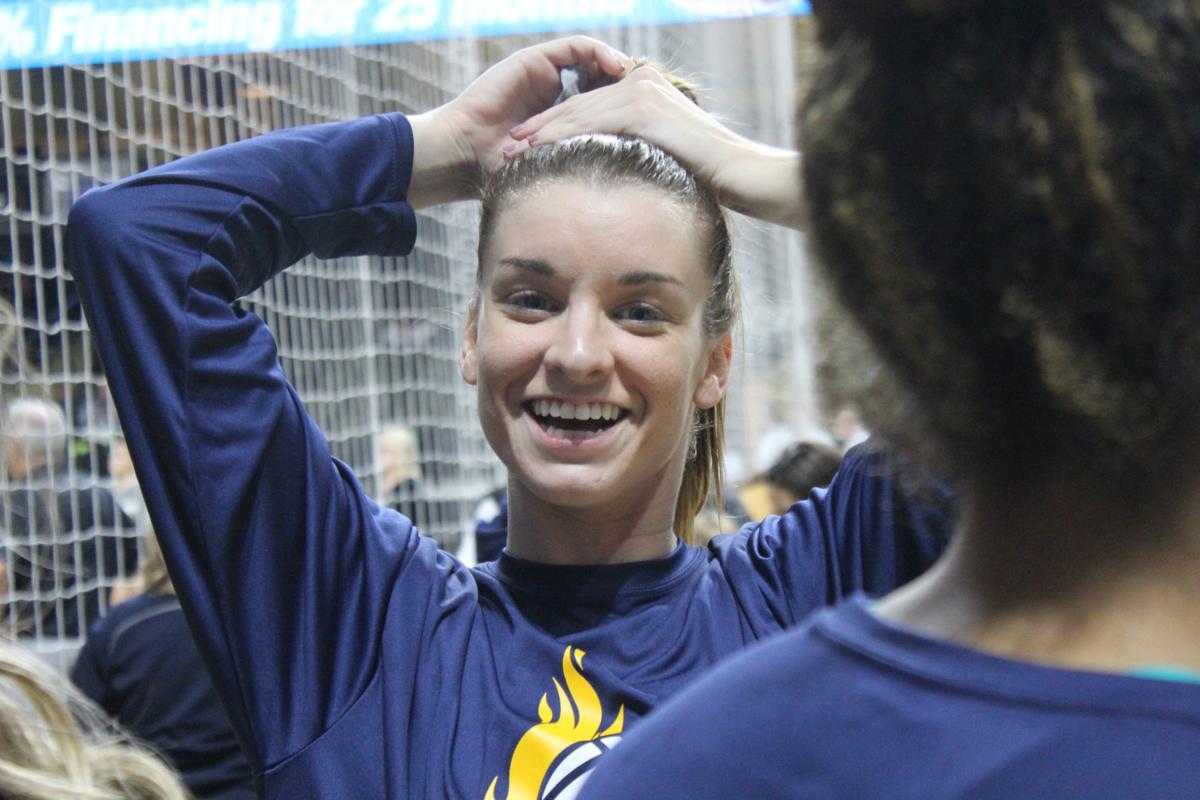 Robley smiles for the camera during warmups at the NAIA national tournament in Sioux City last month.

You could have hardly blamed East Butler grad Payton Robley a few years ago if she had decided enough was enough and walked off the volleyball court forever.

She and her teammates at College of Saint Mary won only seven matches as freshmen then just eight as sophomores. With a heavy workload already on her shoulders as a nursing student, continuing as a student-athlete didn't seem all that worthwhile.

Then came the back half of Robley's senior season. The Flames made an unexpected run to the conference tournament title match and thereby earned themselves a spot in the NAIA national tournament.

Robley, who was a hitter on those seven and eight-win teams, was asked to transition to libero as a senior and did so with flying colors. She was a major factor in bringing CSM back to nationals for the first time since 2006.

Robley ended her career an All-Great Plains Athletic Conference Second Team selection with 699 digs on the season, an average of 4.5 per set, and 35 ace serves. Her digs total was 19th in all of NAIA Division I.

Because she stuck with it, Robley also finished with 802 career kills, 209 assists, 124 aces, 1,702 digs and 75 combined blocks. She experienced an upset win on the road over the No. 1 team in the country, played in a conference tournament title match and played in the national tournament.

Pretty good for a player who wasn't completely sure she had made the right decision not that long ago.

"That conversation came up a couple times with me and one of my other good friends that’s in the nursing program and plays volleyball," Robley said during a recent interview. "At the end of the season freshman and sophomore year after not winning many games, it was kind of frustrating. But once spring season started, I always knew I had made the right choice to stick it out. I’m really glad I did."

Robley was a force for the Tigers in her high school days. She piled up over 500 kills as a senior, hit over .300 and helped the program climb out of a string of losing seasons, just as she would later on in college.

The only time East Butler has had a winning season over the past decade was when Robley was piling up the kills in 2015.

She loves competing on the hardwood and always planned on making volleyball a part of her future. The trouble was, there aren't many four-year schools in the area that offer the sport.

College of Saint Mary seemed a perfect fit for her talents and her academic pursuits.

But then the Flames won just seven matches in her freshman season and eight the following year.

Becoming a nurse and all the extra work required out of the classroom is difficult enough for students, doubly so for student-athletes.

After CSM went 7-17 in 2016, Rick Pruett came on as the new coach and told the team the national tournament was only a few years away.

At the time it was, admittedly, just an interesting thought to Robley and not much more. She entertained the potential of competing on the highest level, but coming off a seven-win year, it was only that - potential.

College of Saint Mary then went 8-19 and doubt was beginning to creep in. Robley was playing well, but the team hadn't made much of a step.

"It was hard at times," Robley said. "It was hard to want to continue to play and go to practice, especially those first couple of years when we were losing a lot of our matches."

The Flames won 14 times in 2018, but still finished below .500 with 17 losses. They also hadn't made much headway in the stacked GPAC.

In a conference that regularly sends four or more teams to the national tournament, CSM went 4-12 in league play and finished second to last.

There are 12 teams in the conference, only eight of which make the postseason conference tournament.

Then, as Robley somewhat expected, Pruitt asked her to move to libero during a chat in late May. The team's leading digger graduated, Robley had the second-most digs of anyone on the team in 2018, and setter Natalie Patten, who was third, also had one year left.

Robley was second on the team in kills as a junior but the roster also brought back four players who had more than 100 kills. She sort of knew Pruett would make the request.

"It takes the whole team to win a game, especially in volleyball. It’s not an individual sport by any means," she said. "I just knew, if that’s what’s best for the team, that’s what I was going to have to do even if it wasn’t what I wanted to do. I was never against it. It was just a big change."

Robley met that change head on, playing only as a libero in summertime open gyms then coming an hour early before practice when the season started with a handful of others to get more touches on the ball.

Everything for Robley, and the group as a whole, came together very quickly once the schedule began.

"Payton was the silent leader on this team. She led this group by her work ethic and toughness," Pruett said. "Payton was always calm and stable, you never knew if she was happy or mad, always even keel.
"That's what made her such a great player was her ability to stayed poised in all situations. She was a team player, never complained about us asking her to move positions during her senior year."

The Flames started 15-3, won their first 10 in a row and earned a national ranking before losing five straight to end September. It was the start of GPAC play and some cause for concern.

Had CSM really taken the next step? Were the Flames better or had the league exposed a fraud?

College of Saint Mary snapped the skid with a five-set win over Morningside after trailing two sets to one. It was one of eight five-set wins on the year. The Flames went 8-1 in matches that went the distance.

It was also, as Robley described it, a weight off the team's shoulders. Perhaps the Flames really were good enough to hang with the GPAC.

"I think it was our coach focusing on the little things that we needed to work on," Robley said about the turning point. "He implemented those things in practice, and that’s pretty much what we spent the rest of our season working on. Clearly, it worked out for us."

CSM's reward for earning its way into the GPAC tournament was an opening-round road matchup with 28-0 and No. 1 Northwestern College (Iowa). Northwestern owned a 3-1 win over CSM just over two weeks earlier in which the Flames lost two of three sets without reaching 20 points.

Robley had 15 digs in the rematch as College of St. Mary won the first two sets, lost a close third but closed it out in the fourth. On the school's website, Pruett called it "probably the biggest win in CSM history."

"I think we celebrated more after winning that game than when we found out we were going to the national tournament," Robley said. "That win meant more to a lot of people than anything."

CSM followed it up with a three-set sweep of Midland, dropped the GPAC tournament title match to Jamestown (North Dakota) but had done enough to catch the attention of the NAIA and earn one of 44 spots into the national tournament.

The tournament hosts, Morningside, and the top 19 seeds automatically received an opening-round bye and advanced to Sioux City. The next 24 teams played on campus sites to determine the other 12 teams for Sioux City.

CSM defeated Lincoln Christian University (Illinois) in straight sets and advanced to pool play as one of 32 teams divided into eight pools. The top two teams in each pool after round robin play moved on to a 16-team single-elimination bracket for the NAIA championship.

That's where it ended for the Flames. They went 0-3 losing two of the three in straight sets and seeing the season close with a 25-17 mark.

Jamestown won the national championship over Northwestern in four sets - the only other team besides the Flames to beat the Raiders this season.

College of Saint Mary earned the No. 23 ranking in the final NAIA poll.

For four seniors, it was an especially meaningful end to four years that had just about everything. The four, Robley, included, were part of an 11-member freshman class in 2016. Only four struck with it all four years and were rewarded with the national tournament.

Seven others transferred or stopped playing somewhere in between.

Robley might have been one of those. Instead, she "trusted the process." She realizes that sounds cliché, but there's really no other way to describe it.

Trust in the coaching staff, her own abilities and her teammates around her made a fairy tale out of what was once just another couldabeen, shouldabeen.

"When I look back on the last four years, I can see how much the team has improved. Even from the beginning of the season to the end of the season this year…just trust the process," she said. "Not everything is going to go your way. You can have a bad day and a bad game. You can always recover from it."

Nate Tenopir is the sports editor of The Banner Press. Reach him via email at DVDsports@lee.net.

Robley smiles for the camera during warmups at the NAIA national tournament in Sioux City last month.