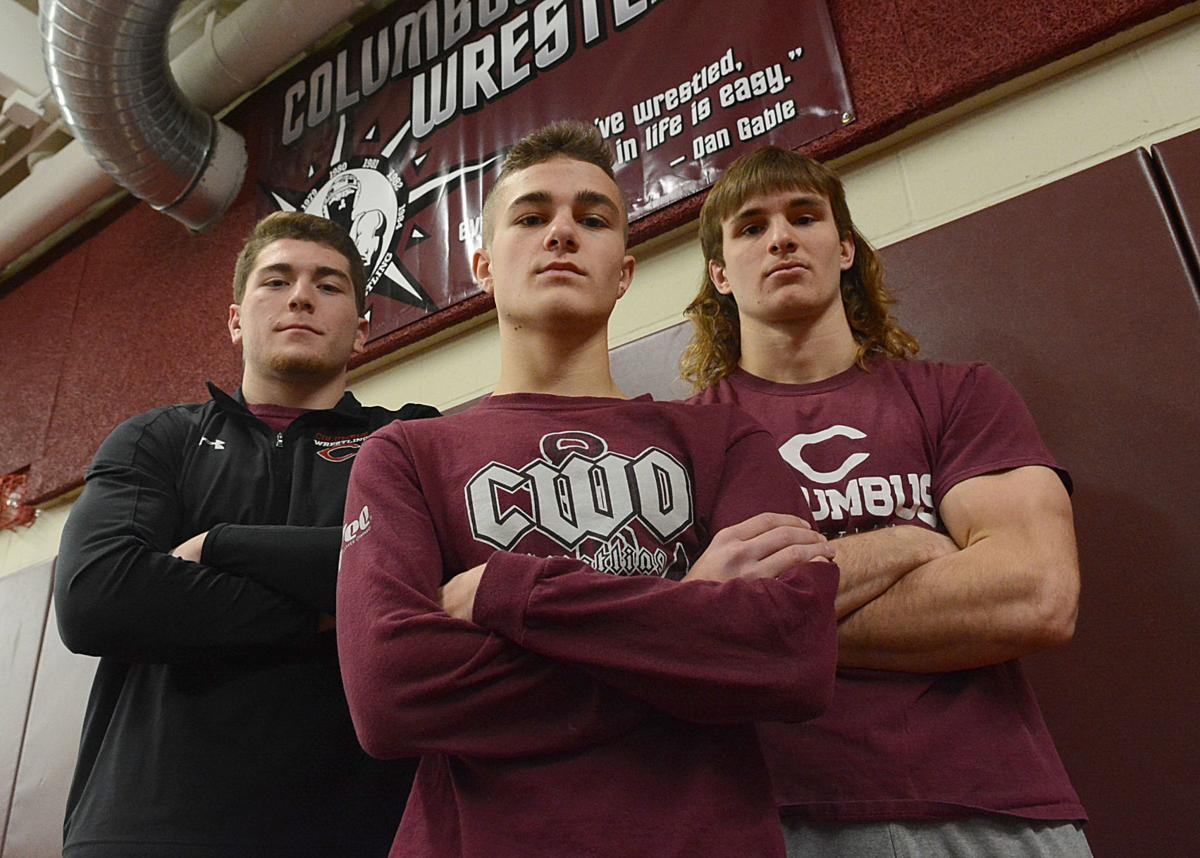 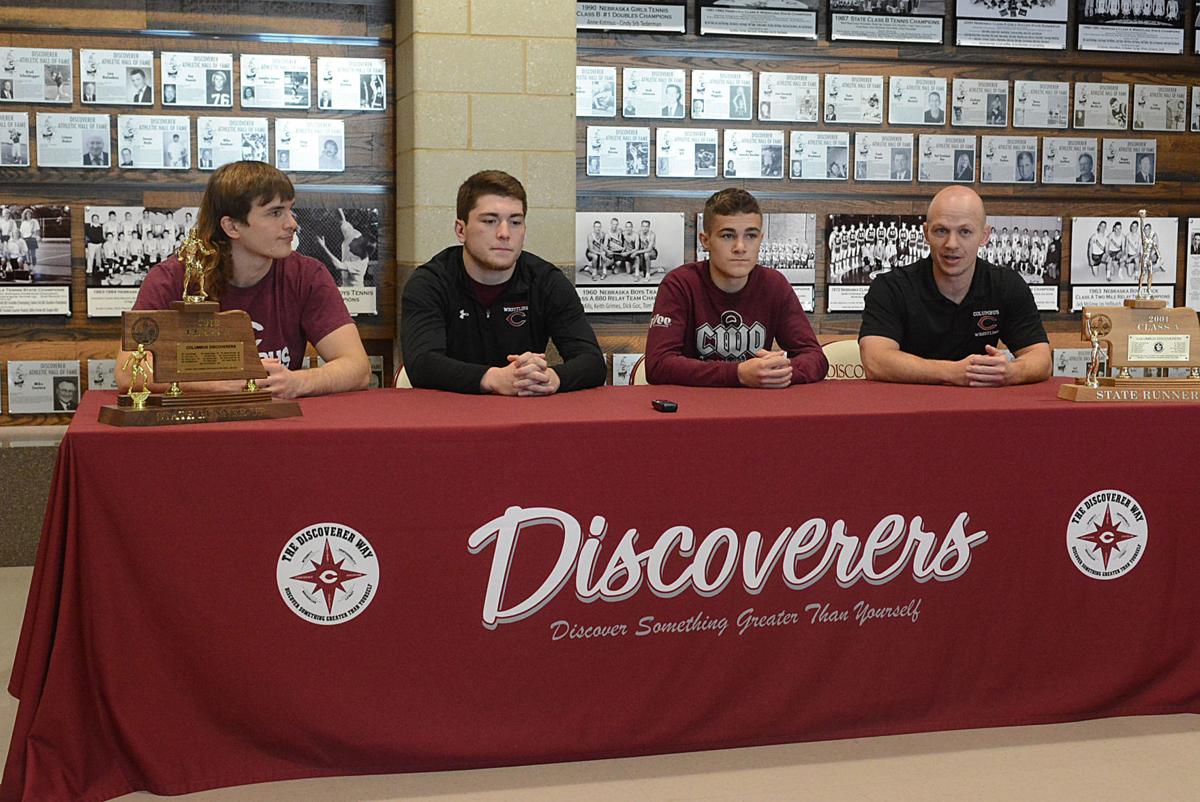 In terms of accomplished returners, it was a no-brainer.

It's a trio that few teams can offer as the faces of the program.

Yet, there was more about those three that made them the obvious choices to speak on their teammates' behalf than similar accomplishments. Each of the three has been at it since kindergarten, putting on a singlet and traveling to a tournament every winter weekend since around the year 2007.

It's a brotherhood that few others can understand without spending the countless hours together it takes to distinguish ones self among the very best. Yet, that's the attitude and the foundation of Columbus wrestling, Keiswetter said.

There's no secret recipe to decades of Discoverer success. It's simply decades of preparation to make it possible.

"That's pretty cool to see that process. It's amazing work ethic, it's the way these guys handle themselves behind the scenes, dedication to lifting weights and being good students," Keiswetter said. "They're three awesome guys. I'm really looking forward to them having a good senior year and putting a punctuation on their high school careers."

Grape, DeAnda and Cerny are part of five returnees who picked up hardware in Omaha a year ago. Juniors Tanner Kobza and Blayze Standley, both fourth at state, are the other two.

In total, there are eight state qualifiers back on a team that's receiving quite a bit of preseason hype after winning its first team trophy in 18 years.

The Discoverers tied Omaha Burke as runners-up last season. They were also third in 2016, but team trophies are only awarded to the winners and second place.

Columbus has six in the preseason NEwrestle.com poll and is rated No. 2 as a group behind Millard South.

The last state championship was in 1984, ending a run of seven state titles in 11 years. CHS also has runner-up trophies from, last year of course, plus four other seasons.

Keiswetter borrowed a quote from 2019 Discoverer Hall of Fame inductee and wrestler Todd Thalken to try and put all of it into perspective, and no doubt, chose Grape, DeAnda and Cerny as the physical representations of that idea.

"He goes, 'I'm just a piece of this wrestling machine,'" Keiswetter recalled from the hall of fame banquet in August. "That's what these guys are. It's just a continuous process. When a senior graduates, a kindergartner begins. It just keeps going.

..."We have coaches that are coaching all the kids from kindergarten to seniors. It's just one big, giant family."

That family will likely be chasing the Millard South family in Omaha. The Patriots have eight team titles on display plus five runner-up trophies.

All but one of those have taken place in the last 18 seasons, meaning Millard South has been the team to beat in mid-February every two out of the last three years since 2002.

This year, the Patriots open as NEwrestle.com's top-ranked Class A team with eight listed in the top eight of their respective weight classes and six of the eight rated No. 1

But as you could have guessed by now, Columbus didn't build the program with an exterior focus

"In the end, I don't know if we need to worry about how many points we score at the state tournament and stuff like that," Keiswetter said. "For me, it's, are these guys reaching their goals? They fill out goal sheets, and I'll do everything I can to help them achieve those."

Each of the three that spoke at media day had gold in mind. For Grape, it's always been about two state championships. He mentioned that right away last year during interviews following his 8-4 state title victory.

Grape went 52-2 last season and won 50 matches the year before as well.

"It's pretty cool (to have the attention of a state champion). I just know more people are probably going to be watching me," he said. "That means I'll have to work even harder than I have been."

Cerny has 96 career wins, made his first state appearance as a sophomore and has picked up two fifth-place medals. He lost in the quarterfinals last season, bounced back with two wins, dropped the consolation semifinal but then shut out an opponent on a technical fall in the fifth-place match.

"We've been teammates for a long time. That would be awesome for us all to be state champs and team state champs," Cerny said. "We have a bunch of good coaches pushing us to work hard and we have everybody in the wrestling room helping us out."

DeAnda was 45-6 as a junior, losing in the semifinals by ultimate tie breaker, winning in the consolation semis then suffering a pin in the third-place match. As a sophomore he was second, dropping the state title match by 16-8 major decision.

"This year, I'm looking to be a state champ. I know these guys are, too."

Discoverers down Tigers in road dual