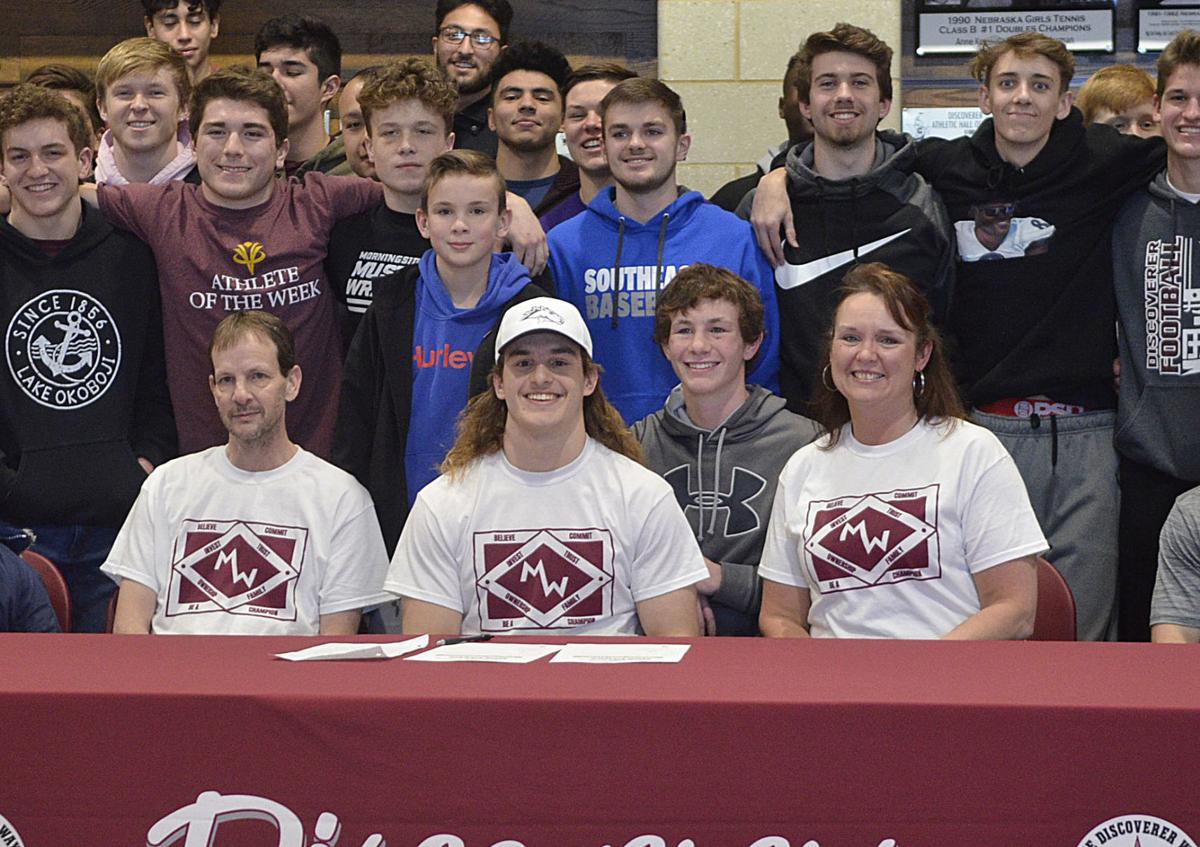 Teammates, classmates and friends crowd around Columbus High senior Kasten Grape, center front, on Wednesday afternoon as he signs his letter of intent to join the Morningside wrestling program. To Grape's right is his father, Ronald, and to his left his mother, Theresa. 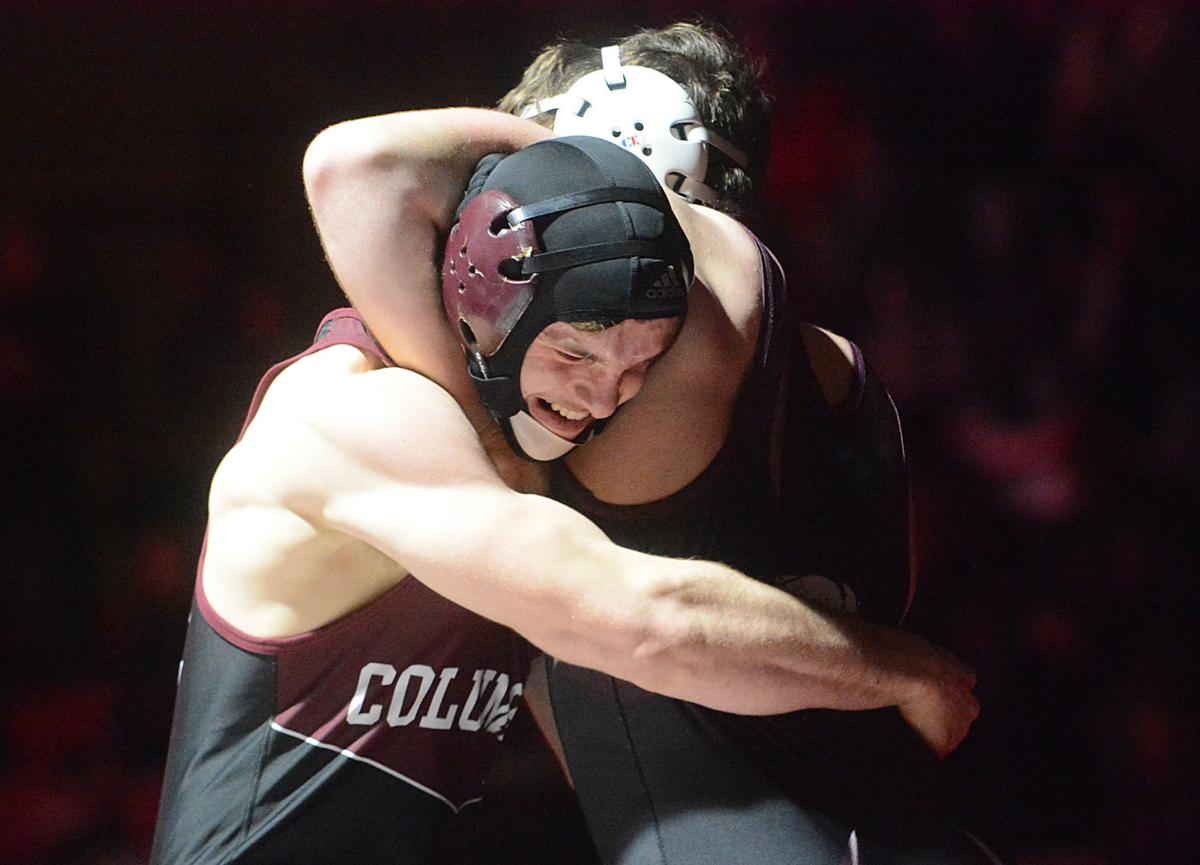 Columbus High senior Kasten Grape will likely go down as one of the most unique wrestlers in the history of the program. And while his iconic mullet and set of longhorns on the hood of his car certainly add to the mystique, it's what Grape has accomplished on the mat that will be his legacy.

That legacy, coach Adam Keiswetter said Wednesday, has everything to do with the time Grape has spent on his craft. In season, and definitely out of season, there's no one more committed to becoming a better wrestler than Kasten Grape.

It's what attracted Morningside College and coach Jacob Stevenson to the Discoverer senior and what the Mustangs believe will allow Grape's success to continue to the next level.

There are few wrestlers at 195 pounds and heavier that can match Grape's dynamic mix of talent. And were it not for mom's insistence he stick with it in junior high, the legend of Kasten Grape might never have been born.

"Probably, what sets him apart from a lot of people is the level of dedication. He’s totally committed," Keiswetter said. "... A lot of times, you group wrestlers into the ones that are really strong and the ones that are technique-based. He’s like an awesome mixture of both. He’s got clean, smooth techniques, but he can also scramble. I think that’s what makes him special."

Grape ventured onto the mat for the first time in the first grade thanks to the influence of his uncles who had once themselves worn a singlet and gone to battle in the circle. But in sixth grade, many of his friends were stepping away from the sport to become basketball players. Naturally, he wanted to stick with his group and lace up his sneakers. His mother, Theresa, said no.

Perhaps she recognized what he didn't or perhaps she didn't want to have a child who quit. Grape's not really sure. What he is sure of was that shortly after, her reasons became clear.

"In sixth grade, I was about to quit, and my mom was like, ‘No, you’re not going to quit.’ I made the national dual team that year and realized, ‘All right, I’m actually good at wrestling,'" he remembered. Eighth grade, I thought about doing it in college."

His trajectory has been nothing but up, up and up since then.

As a freshman, he went 31-19 and qualified for state. As a sophomore, he won three tournaments,went 53-7, advanced to the state semifinals and finished with a third-place state medal. Last season, Grape won four tournaments including his state championship while going 52-2. So far this year, he's won 36 of 37, his third straight GNAC title and finished atop the Bennington Invite.

Though he's had perfect seasons ruined each of the last two years at the High Plains Invite, rebranded as the Norm Manstedt Invite, Grape started his senior campaign 35-0 with 28 pins, one victory by injury forfeit and six forfeits. Last season, he was 34-0 before his first loss with 29 pins and five forfeits.

Simply put, he's been dominant, and he's done it all with a trademark smile that's as noticeable as his "Joe Dirt" haircut.

"He’s got a positive attitude. I don’t think I’ve ever seen a picture of Kasten where he wasn’t smiling," Morningside coach Jacob Stevenson said. "In college wrestling, a positive attitude is huge. It’s very tough, there’s a lot of challenges, a lot of obstacles you have to overcome. If you have that, have that positive mindset, you can be successful and continue to work no matter what situation you’re in."

Keiswetter has no doubt that mindset will continue to Sioux City where he can't wait to see what Grape can accomplish focused solely on the mat. Though he's spent a tremendous amount of time training, he also participates in football and track. At Morningside, all 12 months will be dedicated to wrestling.

And that has more than just Keiswetter excited. Stevenson and Grape both plan on him making an immediate impact.

Grape, who's known Stevenson all his life because of his status as a family friend, could have potentially waited until after the season, earned a second straight state championship and hoped for an offer at a higher collegiate level, but said Morningside always felt like the right fit.

He believes Stevenson is the right coach to prepare him for the future, a future that he fully expects to include a national championship.

And what else is there beyond that?

Don't mistake his confidence for cockiness. Grape has earned the right to be confident for two reasons.

"His attitude and his work ethic," Stevenson said. "We know he’s committed to bettering himself in the wrestling room and outside wrestling, too, so that’s huge because that’s what college wrestling is all about: attitude and growth."

Columbus High senior Clay Cerny was irate when he left the mat following the opening match of Saturday's final round at the state duals.

Teammates, classmates and friends crowd around Columbus High senior Kasten Grape, center front, on Wednesday afternoon as he signs his letter of intent to join the Morningside wrestling program. To Grape's right is his father, Ronald, and to his left his mother, Theresa.