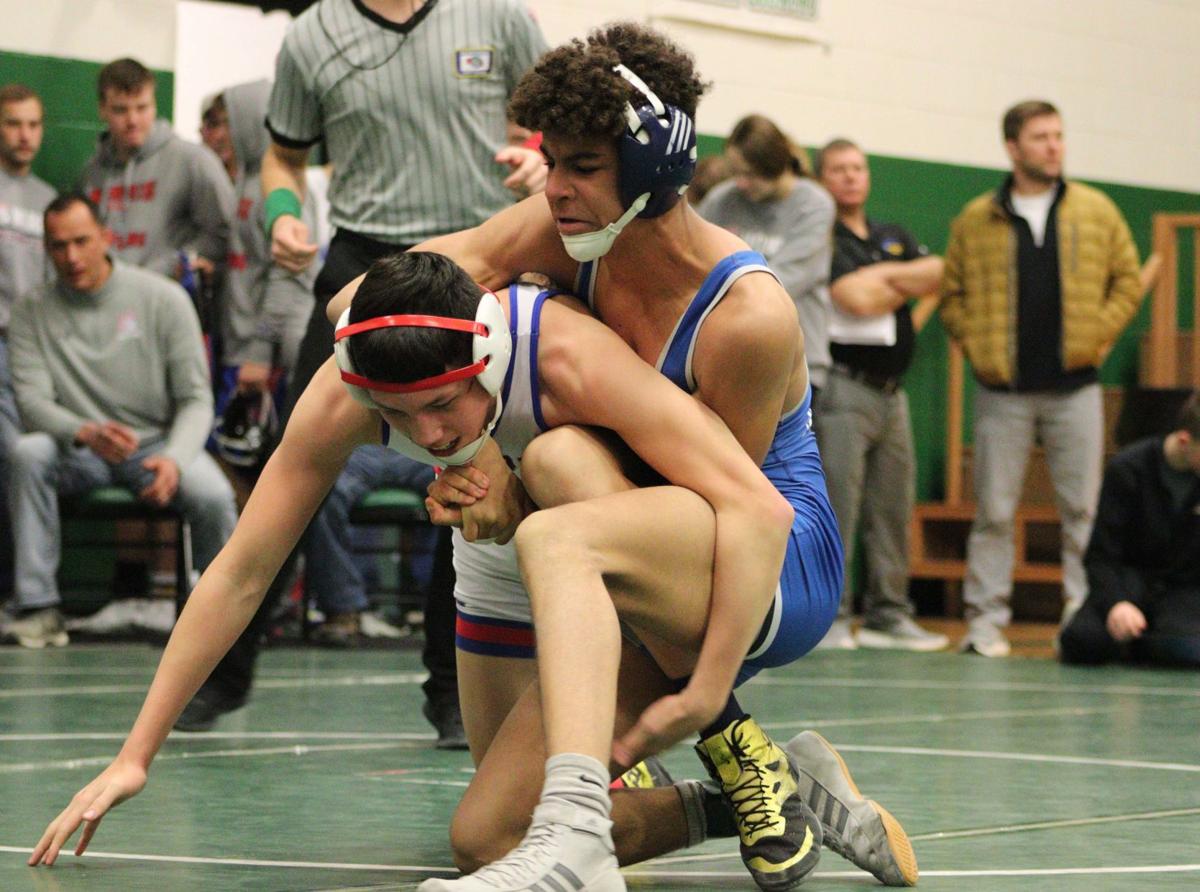 Lakeview senior Lucien Engel controls his opponent from the top at Saturday's Schuyler Invite. Engel took third place, one of 13 medals for a Viking squad that finished as runners-up to David City Aquinas. 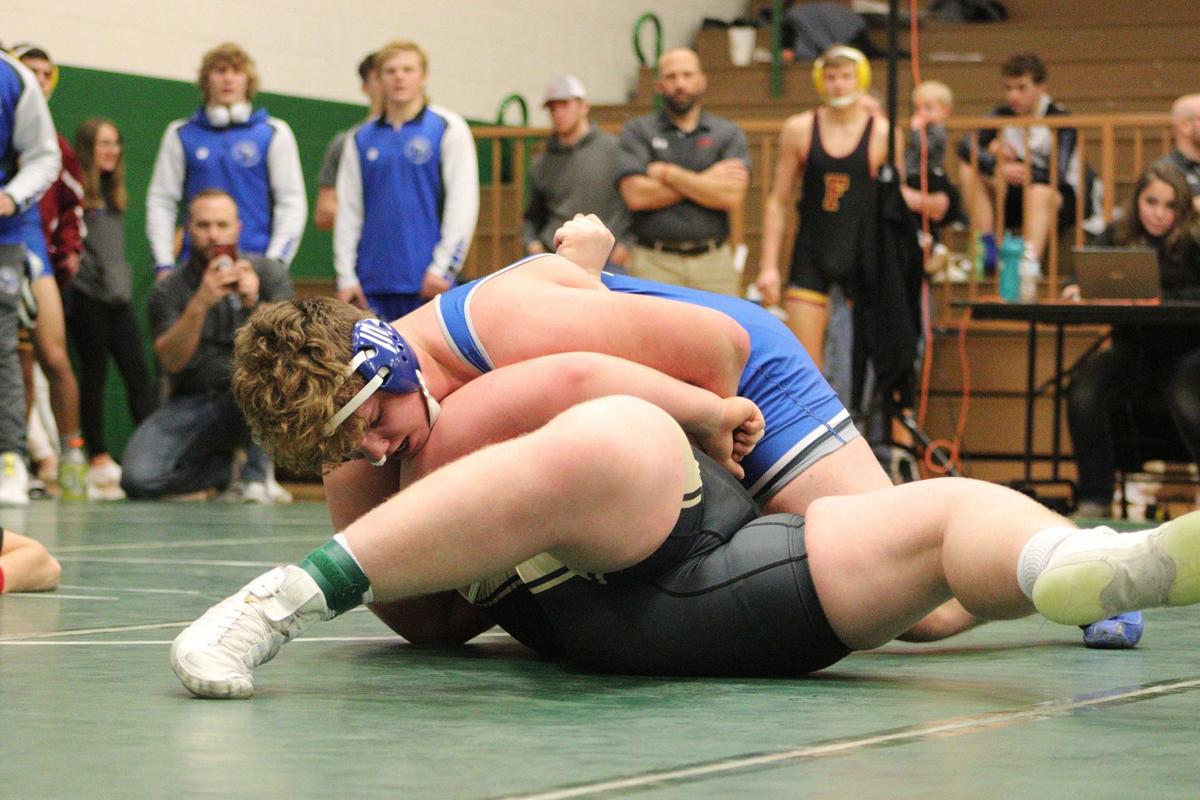 Lakeview's Bradyn Kucera works for the pin at Saturday's Schuyler Invite. Kucera was one of three Viking champs on the day. 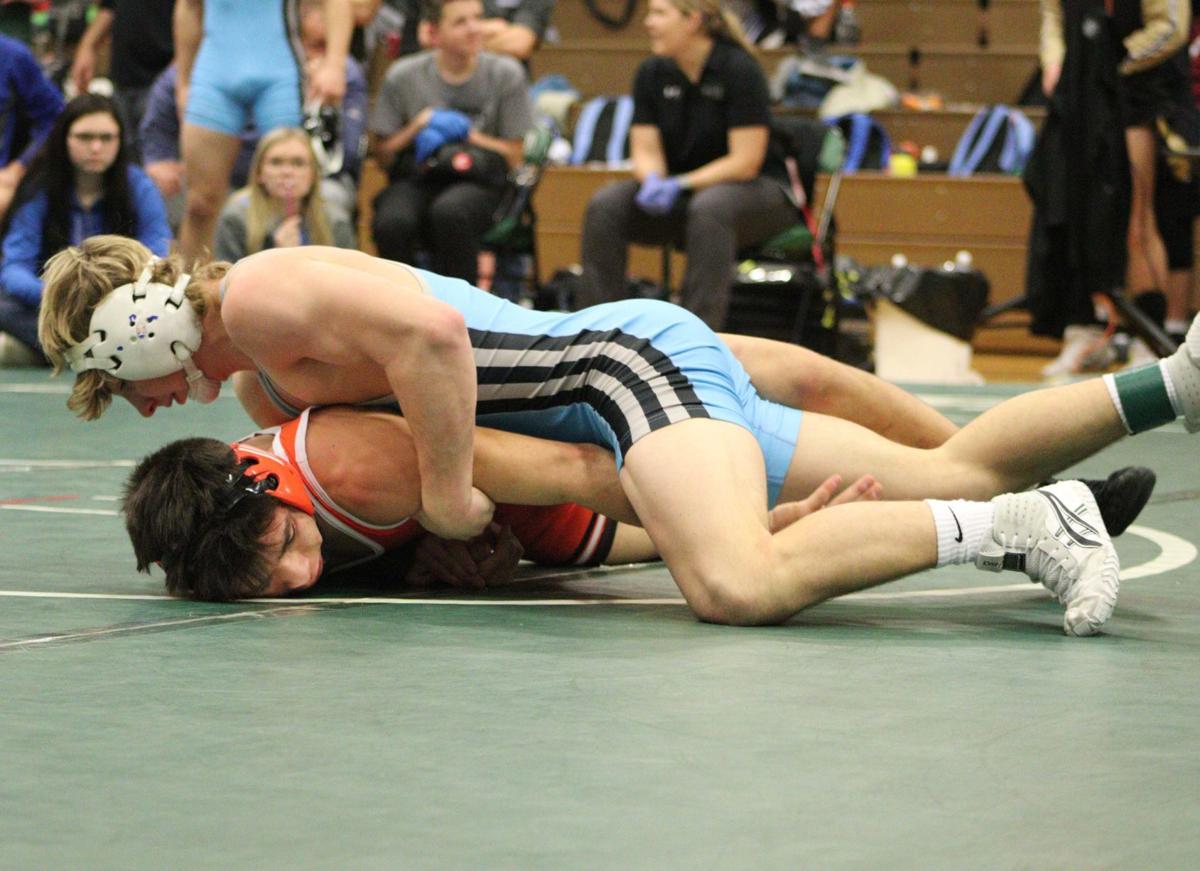 Lakeview's Logan Jaixen controls the arm of his opponent from top on Saturday at the Schuyler Invite. Jaixen needed just two wins, both by decision, to claim the 132-pound championship.

Lakeview wrestling won medals at 13 of 14 weight classes, claimed three titles and wrestled in five title matches while putting together a second-place team finish at the Schuyler Invite on Saturday.

Though all those figures are certainly impressive, Lakeview wasn't quite able to match David City Aquinas and its eight finalists. The Monarchs won just two of the eight but had enough points to take the top spot over the Vikings 223-194.5.

Jaixen improved to 23-5 and only needed two wins to take gold in a bracket that included just five other wrestlers. A first-round bye led him into a semifinal match with David City Aquinas' Noah Scott. Jaixen trailed 4-2 after the first period when he suffered a reversal then had to fight off his back while allowing two nearfall points.

He tied it up in the second with two back points of his own then piled up six points in the third including an escape, takedown and three nearfall points in a 10-2 victory. Jaixen then won his title over Lexington's Dylan Hubbard with a takedown each period before a late Hubbard reversal ended it 6-2.

It was Jaixen's second tournament title of the season following a first-place showing at the Logan View Invite. He also wrestled in the gold-medal match at Ashland-Greenwood on Jan. 11.

"Today was very important," Jaixen said. "It's big to get those in-class wins. Those are the people you'll be facing when it comes to districts and state."

Freshman teammate Owen Bargen earned both the first tournament title and first tournament title match of his varsity career also with just two victories. Bargen pinned his semifinal foe with 20 seconds remaining in the third period following a 9-0 lead then led 8-0 after the first in his title match en route to a 15-0 technical fall with 14 seconds remaining in the match.

"That Lexington kid is a really solid wrestler," said Own's dad and Lakeview head coach Jeff Bargen. "To get a tech fall there is great to see. To get his first high school championship here in Schuyler at a tough meet, that's pretty awesome."

Bradyn Kucera wrestled in his second title match of the season and made it 2 for 2 following a win at the Lakeview Invite. On Saturday, Kucera opened with a 4-2 win on a reversal with 37 seconds left in the third period, took his semifinal matchup 9-4 with a reversal and three nearfall points in the third period then took the top spot with an action-packed 15-10 victory.

Kucera led 7-2 through the first period and was up 11-6 after two. The only offensive points he allowed were on a late second-period takedown then a reversal with 42 seconds left in the match. Otherwise, Scottsbluff's Trayton Travnicek earned six of his 10 points from escapes.

"I'm really proud of (the three champs). Any time you can get a gold at Schuyler, it's a good day."

Lemburg pinning his first two opponents before suffering the same fate to Class C No. 2 Christopher Nickolite of Aquinas. Lemburg scored first with a first-period takedown but then gave up a reversal with 18 seconds left in the period.

Nickolite escaped the bottom 13 seconds into the second then found the winning takedown with 27 seconds left that turned into a pin.

Rollman advanced to the semis with a bye then won 6-1 with two takedowns and a reversal. Norris' Dylan Meyer, No. 3 at 220, denied Rollman the title with a second-period escape and takedown then three nearfall points in the third following an illegal hold for a 6-1 decision.

Johnston lost his semifinal match by pin in the second period but then recovered to pin his next two foes and earn bronze. Dominguez lost in the semis by 9-0 major decision to 120 No. 2 Hunter Vandenberg of Aquinas before a 6-0 win then a 7-1 victory earned him third. Engel lost 3-0 in the semis but recovered for third with a 7-0 victory then a second-period pin.

Lesiak went 1-2 while taking fourth, Fleming was 0-2 but won his final match with a first-period pin for fifth place and Mahoney went 1-3 for sixth.

"Kevin avenged a loss from earlier this year. Lucien Engel competed really well in his semifinal match against a really solid Lexington kid. Joel lost a tough one in the finals there, but I know he'll bounce back," Bargen said. "It's kind of up and down the lineup, guys battling all day.

"It was a good day overall. I'm glad we could bring home some team hardware."

Lakeview fell into an early hole, took a late lead but then lost the final two matches and saw a dual win slip away against Grand Island North…

Lakeview senior Lucien Engel controls his opponent from the top at Saturday's Schuyler Invite. Engel took third place, one of 13 medals for a Viking squad that finished as runners-up to David City Aquinas.

Lakeview's Bradyn Kucera works for the pin at Saturday's Schuyler Invite. Kucera was one of three Viking champs on the day.

Lakeview's Logan Jaixen controls the arm of his opponent from top on Saturday at the Schuyler Invite. Jaixen needed just two wins, both by decision, to claim the 132-pound championship.