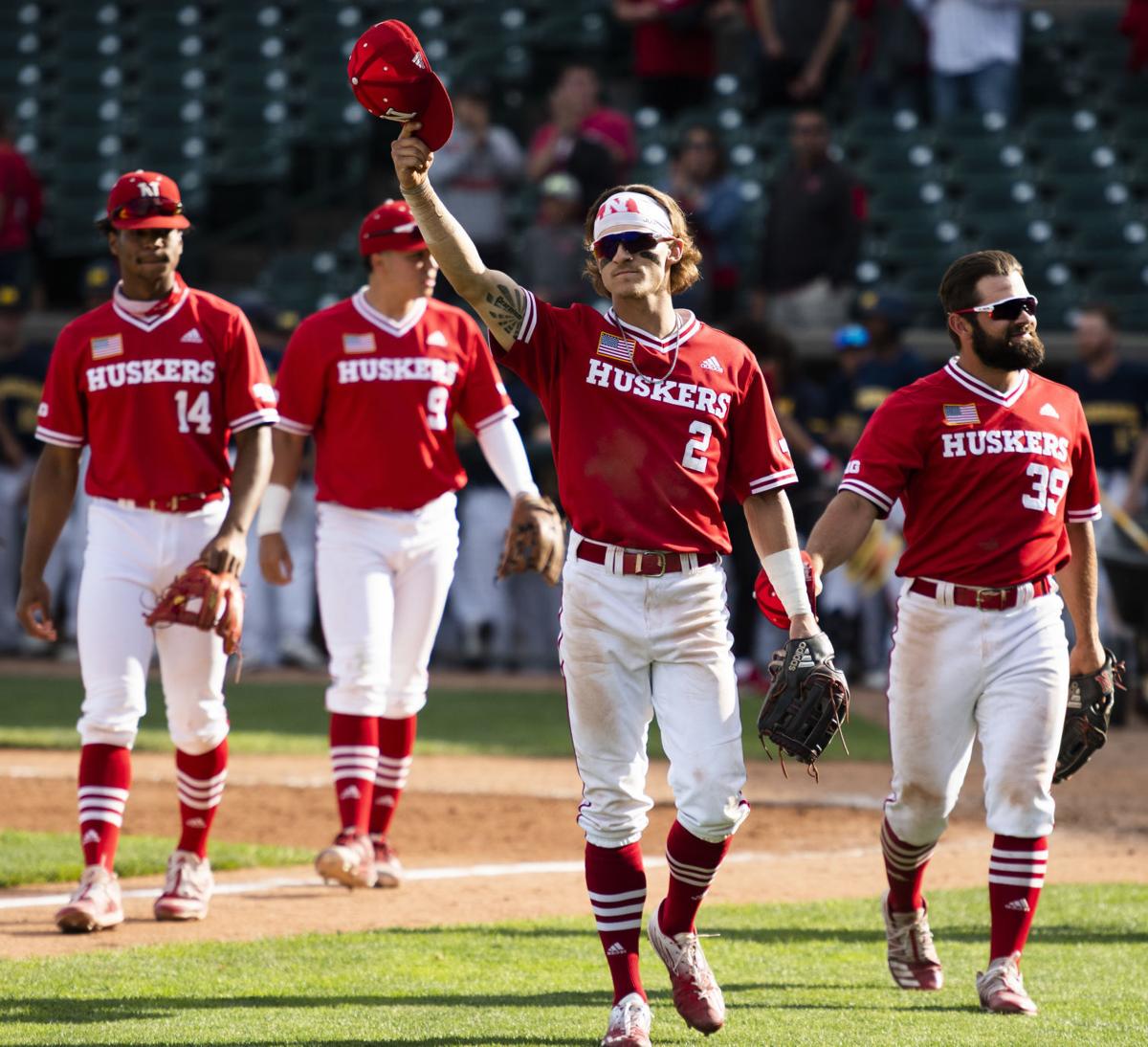 Nebraska's Jaxon Hallmark (2) raises his hat to the crowd after the Huskers defeated Michigan in the second game of a doubleheader Saturday at Haymarket Park. 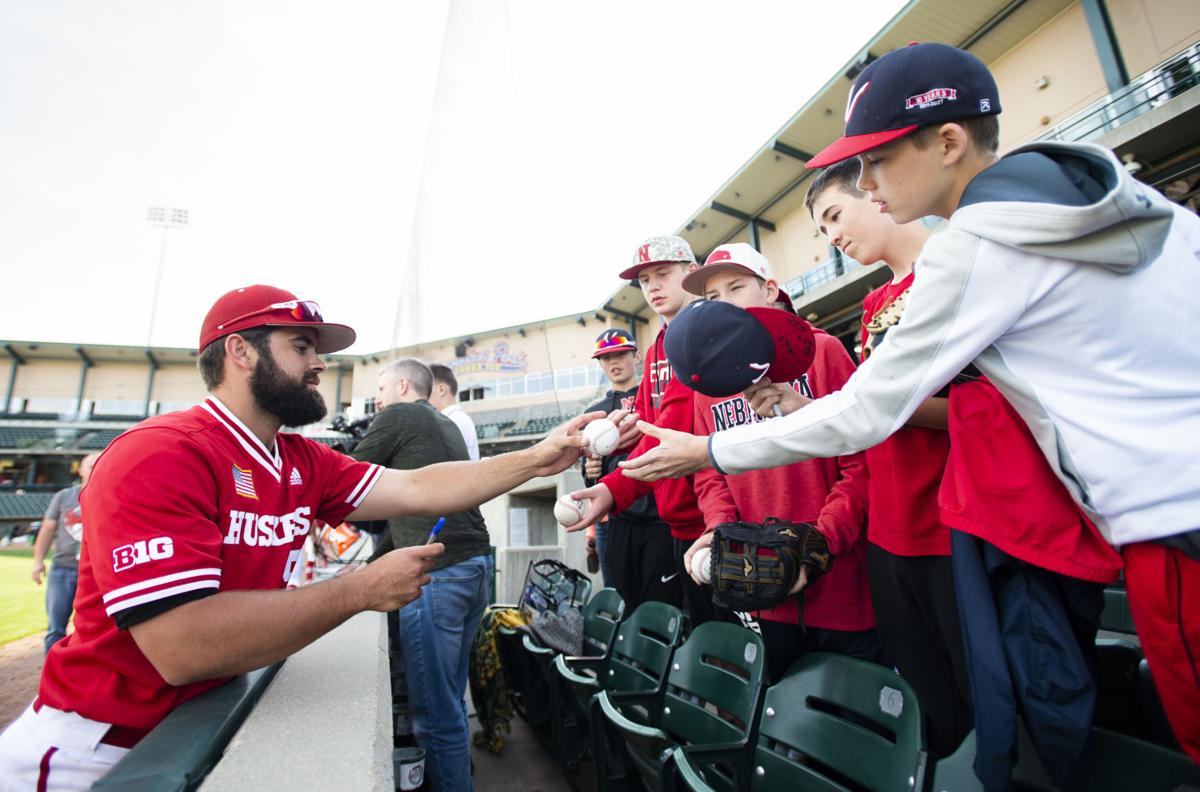 Nebraska's Mojo Hagge signs hats and balls after the second game of a doubleheader Saturday at Haymarket Park.

If you want to strike up a conversation about what good baseball looks like, go seek Logan Foster.

Before transferring back home to Nebraska the Lincoln Southwest graduate played at Texas A&M and was part of three NCAA Tournament teams. That included the 2017 Aggies, who made the College World Series when Foster was a freshman.

Foster has seen it. He began seeing it again early this season.

"I told Coach (Will) Bolt earlier in the season, 'This team's got it,'" the senior said Saturday after the Husker baseball team wrapped up a 31-12 regular season. "I like our odds with anyone on this team. ... This team definitely has a real shot to do something special."

Foster's hunch from early in the season has only strengthened in recent weeks. Nebraska won 11 of 13 games to close the regular season and grabbed the Big Ten championship with three games to spare. The Huskers took two of three from a quality Michigan team.

Next up is Selection Monday. The Huskers will find out at 11 a.m. on ESPN2 where they'll be heading for NCAA regional play.

The Huskers are projected to be a two seed. D1baseball.com has the Huskers as the No. 2 seed in the Eugene (Oregon) Regional.

Whether it's Eugene, Spokane, Nashville, Oxford or Lubbock or the hornet's nest in Fayetteville, Nebraska isn't worried about where it gets placed in the 64-team field.

"At this point it doesn't matter; it's just wherever they send us," said Bolt, who was named Big Ten coach of the year Sunday. "We can't even look beyond, if we're the two seed or the three seed, who the one seed is. ... Who you are playing that game is always the most important part of a regional.

"You start looking ahead at the next game or the next weekend, you got no shot."

The Huskers believe they have a shot.

There was no conference tournament this year, so Nebraska and other Big Ten teams hopeful of the NCAAs didn't get a sense for postseason baseball this week likes teams from the ACC, Big 12, SEC and AAC. However, the back end of the schedule has prepped NU well.

The Huskers played four games against Indiana and three against Michigan and went a combined 5-2 against the NCAA Tournament hopefuls. NU saw quality pitching over the final weeks, battling against Michigan's Steve Hajjar and Cameron Weston and Indiana's McCade Brown.

Said junior pitcher Kyle Perry, "I think we found a rhythm a couple of weeks ago, honestly. I think we’re hitting our stride at the perfect time right now and I am pretty excited for it."

The Husker offense has done its part, scoring seven runs or more eight times over the final 13 games. The arms have done some heavy lifting, too. Starters Cade Povich and Chance Hroch have looked sharp and NU just held one of the Big Ten's top offenses in Michigan to a combined five runs in three games.

NU finished first in the Big Ten in fielding percentage and second in stolen bases.

Those ingredients have the Huskers, who earned the Big Ten's automatic NCAA bid, feeling good going into the week.

Selection Monday will be sweat-it-out-Monday for many teams. For the Huskers, who took the drama out of the Big Ten race a week ago, it will be Unwind Monday.

"I might be on the golf course or something," junior pitcher Shay Schanaman said. "We don’t care who we play. … We’ll play anybody, anytime, we’re just excited to keep playing."

Photos: Huskers and Wolverines play two in front of a packed house at Haymarket Park

Reach Clark Grell at 402-473-2639 or cgrell@journalstar.com. On Twitter at @LJSSportsGrell.

The beauty was in the imperfections. Those who played at Buck say it fit the Huskers: "Hard-working, blue-collar, straight to the point-type people."

The cupboard is far from bare as the Cornhuskers begin to figure out how to back up their 34-14 season and their first regional final since 2007.

Six Huskers to be inducted into 2021 Nebraska Athletics HOF, and the class shares a theme

Each inductee accomplished never-before-seen Husker feats. Here's a refresher on each member's feats ahead of the Oct. 1 ceremony.

Secret's out early. Alex Gordon will be torchlighter at this year's Cornhusker State Games

Alex Gordon, who retired from baseball last fall, will be this year's torchlighter, the State Games officials announced.

'You got to have that fight': Huskers force winner-take-all regional final with gritty win over No. 1 Arkansas

The win gives the Huskers an opportunity to play for a super regional appearance. Monday's game is set for a 6 p.m. start.

Scoring eight runs in the fourth inning and six more in the fifth, the Cornhuskers blasted NJIT 18-4 in a Sunday afternoon elimination game.

The most anticipated matchup of the Fayetteville Regional begins in about two hours. Nebraska vs. Arkansas. Mentee vs. Mentor. Follow along.

Husker pitchers threw 11 straight balls in a disastrous eighth inning, and the Razorbacks scored four times to pull away.

Nebraska's Jaxon Hallmark (2) raises his hat to the crowd after the Huskers defeated Michigan in the second game of a doubleheader Saturday at Haymarket Park.

Nebraska's Mojo Hagge signs hats and balls after the second game of a doubleheader Saturday at Haymarket Park.