The Nebraska baseball team made a late addition to its 2020 recruiting class Friday with the commitment of junior college pitcher Chat Hayes.

A native of Grove, Oklahoma, Hayes originally signed with Arkansas-Pine Bluff in late 2018.

But the left-hander underwent Tommy John surgery in May of 2019, and instead ended up at Coffeyville Community College (Kansas) this spring.

Where to find Husker baseball players playing baseball this summer

The signing also gives NU another pitcher to fill the void left by Bo Blessie, who entered the transfer portal earlier this week, a source confirmed to the Journal Star.

Blessie, a Texas native, spent two seasons at NU, turning down pro baseball after being drafted by the Washington Nationals in the 36th round of the 2018 MLB Draft.

As expected, seniors Acker, Hagge and Roskam will return for one more season with Husker baseball team

The three seniors all indicated early on in the pandemic that they would return to NU if the situation presented itself. 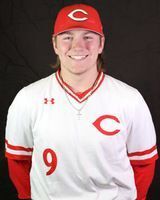