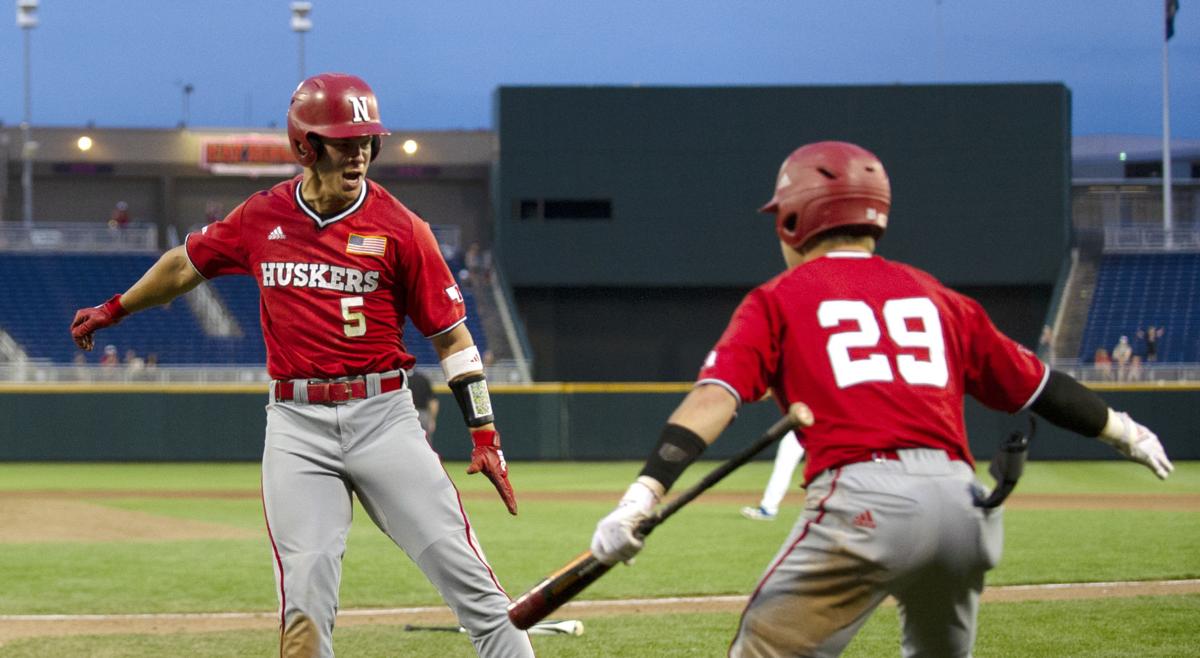 Nebraska's Joe Acker (5) celebrates with Nebraska's Cam Chick (29) after Acker scores a run in the sixth inning to give the Huskers a 5-3 lead against Michigan on Saturday during the Big Ten Tournament at TD Ameritrade Park Omaha. 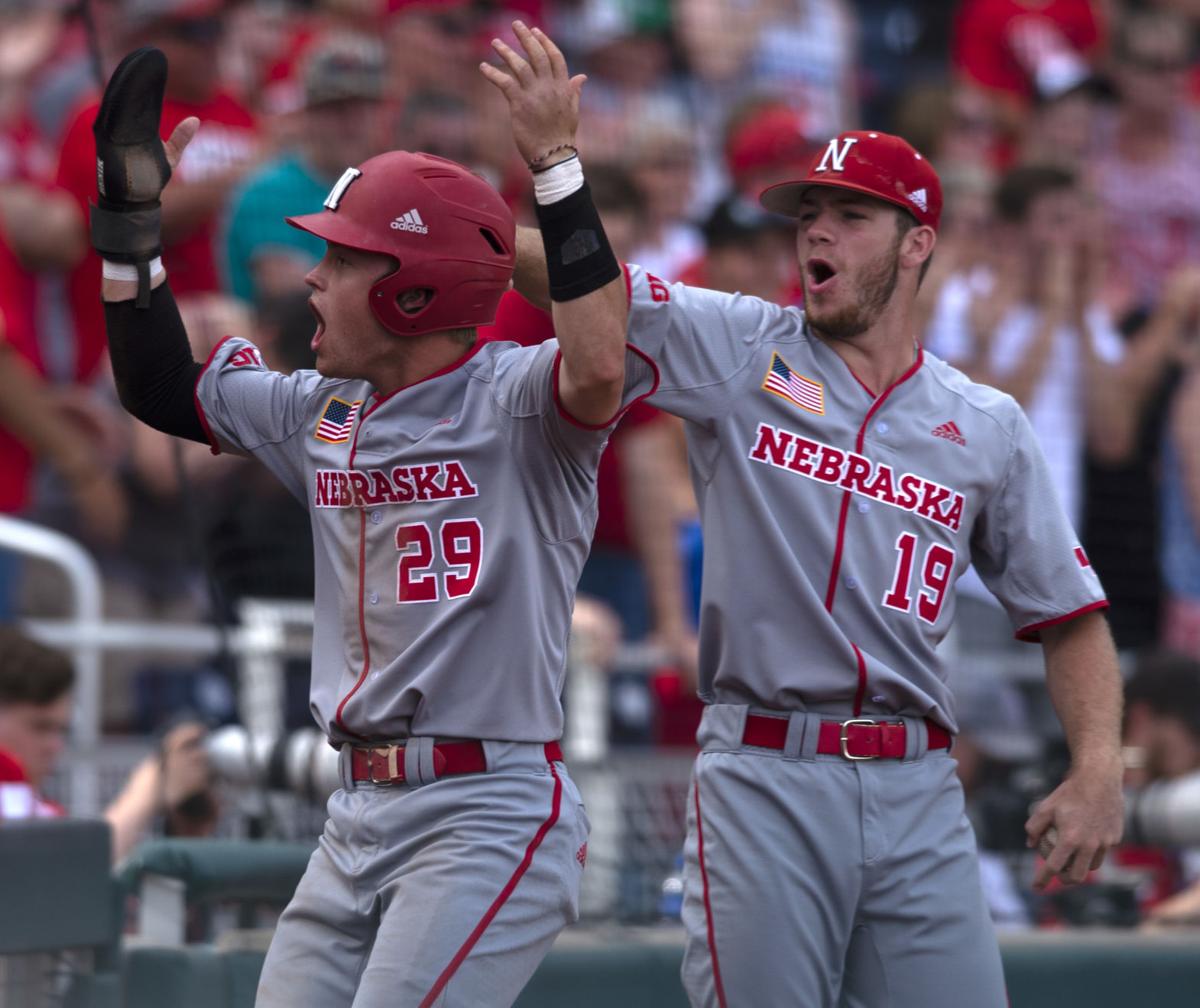 Nebraska's Cam Chick (29) celebrates after he scores the first and only run for his team against Ohio State during the Big Ten Tournament championship game Sunday at TD Ameritrade Park in Omaha. 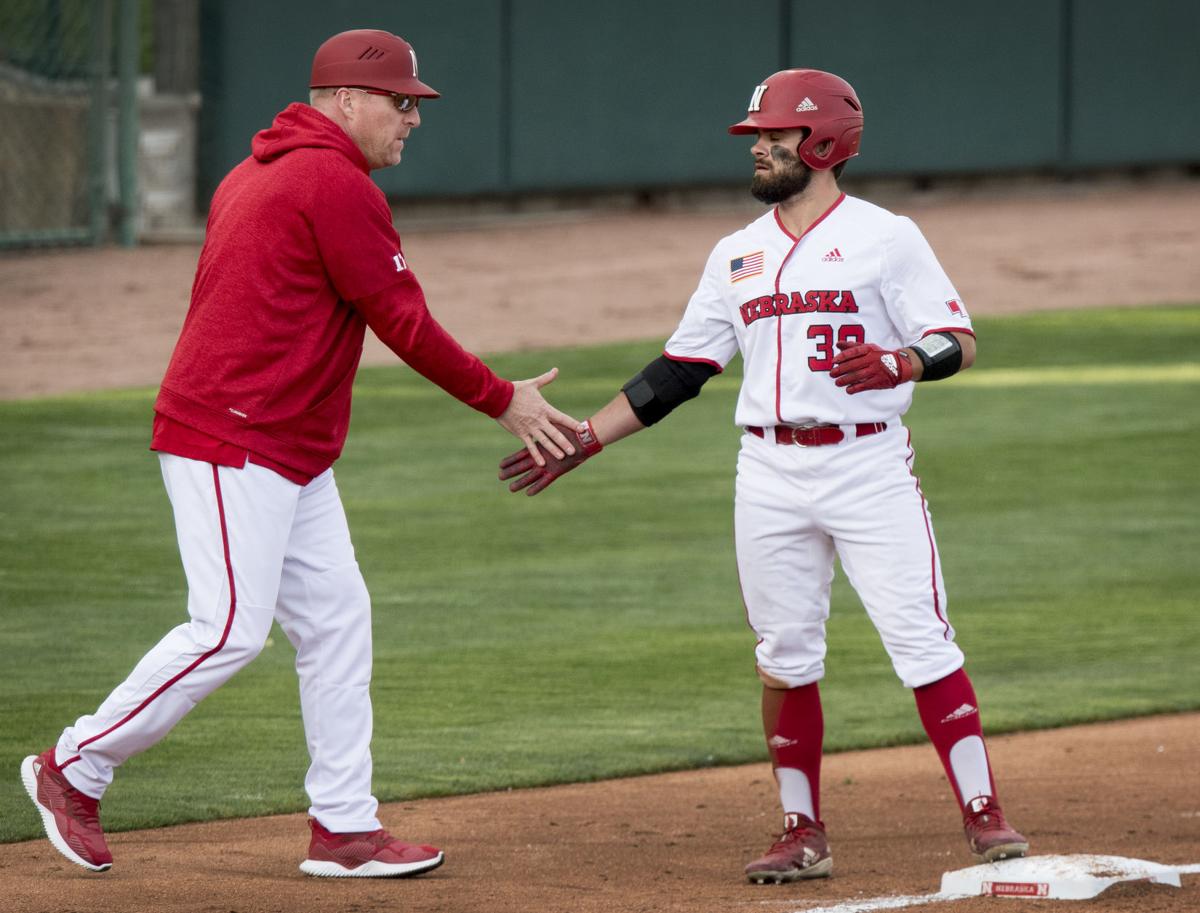 The Nebraska baseball team will visit an old friend to start the NCAA Tournament.

The Huskers are headed to the Oklahoma City regional as a No. 3 seed and will take on No. 2 seed UConn at noon Friday as part of the regional hosted by Oklahoma State.

The Cowboys and Harvard are on the other side of the bracket. Because of statewide flooding in Oklahoma, the regional was moved from Stillwater to Chickasaw Bricktown Ballpark in Oklahoma City.

The 64-team bracket was announced Monday. It will be Nebraska's third NCAA Tournament trip in the last four seasons.

"I'm not going to break it down too much other than I'm happy we're in. The boys deserve it. They beat some real quality teams this year," NU coach Darin Erstad after the bracket was announced. "Like I told the seniors, this is three out of four years. Matt Waldron starting at Clemson as a freshman, and now he's going to be starting in Oklahoma City as a senior. I think that's pretty cool."

Nebraska, of course, has plenty of good memories from playing in Bricktown. The Huskers won four Big 12 tournament titles at the ballpark, including three in a row from 1999-2001. The fourth title came in 2005, when current NU assistant Curtis Ledbetter was named tournament MVP.

"I wasn't around for all the Bricktown years. They've obviously had a ton of success there in the history of Nebraska baseball, so hopefully some of that rubs off on our boys," Erstad said. "But this time of year you just want to get your foot in the door, and hopefully we can play some good baseball.

NU lost its only matchup with UConn, a 15-0 defeat in the 1979 Northeast Regional. In more pertinent statistical matters, the Huskies went 36-22 this season, including 12-12 in the American Conference. That record includes taking two of three games from Louisville, who went on to earn the No. 7 overall national seed, in a season-opening series and sweeping a four-game series from Michigan State.

Like the Huskers, UConn lost in its conference tournament title game, falling to Cincinnati 22-5 Sunday. The Huskies' No. 1 starter is Mason Feole, a left-hander who is 3-3 with a 3.50 ERA.

The strength of the UConn pitching staff is the bullpen, where Jacob Wallace, CJ Dandeneau and Caleb Wurster have combined for an 11-3 record. Wallace has 15 saves and a 0.73 ERA. His save total is fourth in the nation.

Nebraska last faced Oklahoma State in 2016 at the Clemson regional, losing 6-0. The Huskers have never played Harvard in baseball. The Huskers played in the Stillwater regional in 2014, going 1-2 with a pair of losses to Cal State Fullerton and a victory over Binghamton. That win remains Nebraska's last victory in the NCAA Tournament.

It's also the last time Nebraska had a relatively short trip to play in the NCAA Tournament. The Huskers went to Corvallis, Oregon, two seasons ago, and to Clemson in 2016.

"I'm pumped that we're going to be able to get on a bus and not nine different flights to get everybody there," Erstad said.

Omaha, making its first NCAA Tournament appearance, is the No. 4 seed in the UCLA regional, while Creighton is headed to the Oregon State regional.

The beauty was in the imperfections. Those who played at Buck say it fit the Huskers: "Hard-working, blue-collar, straight to the point-type people."

The cupboard is far from bare as the Cornhuskers begin to figure out how to back up their 34-14 season and their first regional final since 2007.

Six Huskers to be inducted into 2021 Nebraska Athletics HOF, and the class shares a theme

Each inductee accomplished never-before-seen Husker feats. Here's a refresher on each member's feats ahead of the Oct. 1 ceremony.

Husker pitchers threw 11 straight balls in a disastrous eighth inning, and the Razorbacks scored four times to pull away.

Scoring eight runs in the fourth inning and six more in the fifth, the Cornhuskers blasted NJIT 18-4 in a Sunday afternoon elimination game.

The most anticipated matchup of the Fayetteville Regional begins in about two hours. Nebraska vs. Arkansas. Mentee vs. Mentor. Follow along.

Will Bolt, in his first full season at NU, has a chance to best his mentor and former coach Dave Van Horn, in getting the Huskers to a super regional. Van Horn did it in his third season at Nebraska. Bolt will try to do it in two.

'You got to have that fight': Huskers force winner-take-all regional final with gritty win over No. 1 Arkansas

The win gives the Huskers an opportunity to play for a super regional appearance. Monday's game is set for a 6 p.m. start.

Nebraska's Joe Acker (5) celebrates with Nebraska's Cam Chick (29) after Acker scores a run in the sixth inning to give the Huskers a 5-3 lead against Michigan on Saturday during the Big Ten Tournament at TD Ameritrade Park Omaha.

Nebraska's Cam Chick (29) celebrates after he scores the first and only run for his team against Ohio State during the Big Ten Tournament championship game Sunday at TD Ameritrade Park in Omaha.