70 at 50: Van Brownson played a key role as half of two-headed QB monster for Huskers
View Comments
Share this
{{featured_button_text}}
1 of 2 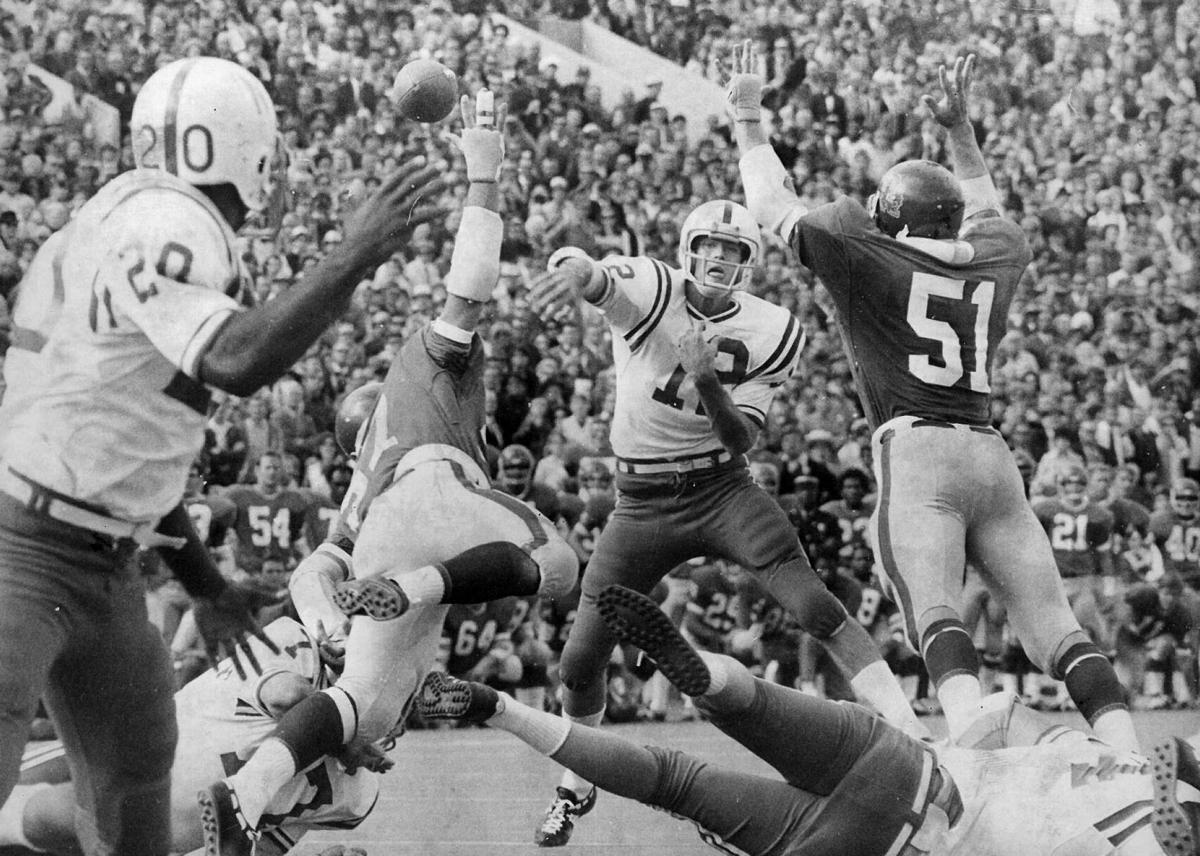 Nebraska quarterback Van Brownson fires a pass during a 1970 contest against Kansas in Lawrence, Kan.

These days, the Nebraska football program has a relatively firm rule in recruiting quarterbacks: Take one per year.

Ideally, you add fresh competition to the room every year without overcrowding it. Under head coach Scott Frost, there hasn’t been much need to adjust for transfers yet, but of course that someday will become part of the equation.

In 1968, though, there was no such thought of limiting the number of quarterbacks in a class.

What's all this about '70 at 50'? A look at the Journal Star's history project on Nebraska's first title team

In fact, Van Brownson and Jerry Tagge were hardly alone when they showed up at Nebraska for their freshman season.

“I think we had about seven,” Brownson told the Journal Star this week.

“I think six of them were scholarship quarterbacks,” offensive lineman Mike “Red” Beran said. “And they were all good. … Most people don’t know this, but Jeff Kinney came in as a quarterback.”

Some moved off the position quickly. Brownson, a Shenandoah, Iowa, native who was born in Lincoln and found his way back to UNL for his college career, himself could have ended up at defensive back. Instead, he and Tagge separated from the pack a bit over eight weeks leading into a four-game freshman season.

“There was enough time there to determine the positions that they were going to move people to,” said Brownson, who started over Tagge in 1968 on the freshman team. “It eventually worked its way out because of injuries and other things — people getting moved to other positions — so eventually it worked its way to where I was going to stay at quarterback.”

That, of course, set the stage for a job-share arrangement that bobbed and weaved through injuries to both players, through a promising 1969 season and headlong into a national championship campaign in 1970.

“Jerry sustained some injuries and physical problems when we were freshmen and they actually moved Jerry, I think, to some different positions,” Brownson. “Then settled on quarterback with him when we were going into our sophomore year. … Then we had a pretty good idea of what was going to happen. They moved Frank Patrick to tight end, who had been a quarterback the previous two years, and so Jerry and I, I guess, kind of rose to the top of the quarterback scene in our sophomore years.

“We had a respectful, competitive career while we were at Nebraska.”

Of course, Tagge eventually took over the job almost full time down the stretch in 1970 (we’ll get to that part), scored a now-famous game-winning touchdown against LSU in the 1971 Orange Bowl and then started the entire 1971 season as the Cornhuskers turned one national championship into back-to-back titles. Eventually, he was picked in the first round of the NFL Draft by Green Bay — no doubt in part because Packers and former Missouri coach Dan Devine had seen him up close and personal.

For much of the 1969 and 1970 seasons, though, Tagge and Brownson teamed up to guide the offense.

“Van got hurt a couple of times; I think in 1969 he got hurt and Jerry stepped up and came in, and Jerry got hurt a few times, so they kind of alternated that way,” Beran said. “Also, if one of them was having an off game, the other one came in and they led us on to victory.”

Brownson, though, couldn’t play at the beginning of the 1970 season because he had suffered a cringe-inducing elbow injury. He and the newly installed turf at Memorial Stadium didn’t get along well, and a rug-burn-style irritation on his elbow got infected, then caused a bursa sac to explode.

“It looked like I had a golf ball in my elbow,” Brownson said.

He watched Nebraska throttle Wake Forest, then traveled to Los Angeles but didn’t play in NU’s 21-21 tie with No. 3 USC.

“The fact that it was USC and it was out there kind of negated any bad feelings,” Brownson said. “We knew they had a good team and we tied them, but it shouldn’t have been a tie.”

His return to the field finally came at halftime in Columbia, Missouri, when Nebraska found itself tied at seven with the Tigers.

“Missouri was always one of the hardest-hitting we played year in and year out. It didn’t make any difference what the records were,” Brownson said. “They were always a solid football team. Dan Devine ran an excellent program down there. (Coach Bob) Devaney came up to me at halftime of the Missouri game, and I hadn’t played in any of the games up to that point, and he told me that he was going to start me in the second half.”

When both quarterbacks were healthy, that’s how it went.

“If you played in a game and you finished it doing well, having success, then you started the next week,” Brownson said.

Being the starting quarterback, then, was essentially a quarter-to-quarter proposition.

“It kept you working to develop and hone the skills that you needed to be the best you could be,” Brownson said. “You didn’t think about transferring anyplace. Back in those days, when you signed a scholarship, you did it because there was something about the school that you liked, whether it was the coaching staff, the atmosphere or the culture, but that was where you were going to spend the next four or five years of your life depending on if you redshirted. You could just continue to hone your skills and wait for your chance to get the opportunity.

“Jerry and I both considered ourselves starters. We had a lot of the same skills and were capable and had proven we could win. So it was just a matter of having the chance to get on the field, and sometimes it worked out and sometimes it didn’t.”

Brownson started the next three games and Nebraska scored 41 against the Jayhawks and 65 against Oklahoma State before he took a hard shot during a 29-13 win at Colorado and reinjured his elbow. You know the story from there, as Tagge led NU through the rest of its 10-0-1 season and then to a 13-0 mark in 1971.

What a luxury, though, to have two quarterbacks capable of winning games and stepping in at any moment.

“Van had a scramble against Oklahoma where he ran about 150 yards to gain 30,” Beran said. “It was a phenomenal run. Van absolutely deserves a lot of credit.”

That, more than anything, is how Brownson remembers his playing days in Lincoln.

“I appreciate my college football experience,” he said. “We were all in it to do the best we could and to have the best football program that we could have there at Nebraska.”

"I would want as many fans in Memorial Stadium as local health authorities would approve," the Husker AD tells the Journal Star.

Nebraska on Monday announced the kickoff time for its home opener on Oct. 31 against Wisconsin.

"Work in progress" Omar Manning has missed time since arriving on campus this summer both due to injury and due to personal reasons, the coach said.

The assertion is the latest indicator that Luke McCaffrey is making a hard charge at challenging Adrian Martinez.

Kade Warner offered his evaluation of both Adrian Martinez and Luke McCaffrey. He says they are both making strides in similar areas.

With clean bill of health, Nebraska senior safety Dismuke feels this could be 'breakout year'

In August, every employee of Nebraska's athletic department either took a salary reduction or were furloughed due to COVID-19's impact.

'It's something that's important to me': Husker football players speak out against racial injustice

Cam Taylor-Britt: "I’m not a kid anymore and I know what’s going on. We just have to come together as people, I believe, and get this done."

Here's a look at how former Nebraska players fared this week on the NFL gridiron:

Nebraska quarterback Van Brownson fires a pass during a 1970 contest against Kansas in Lawrence, Kan.