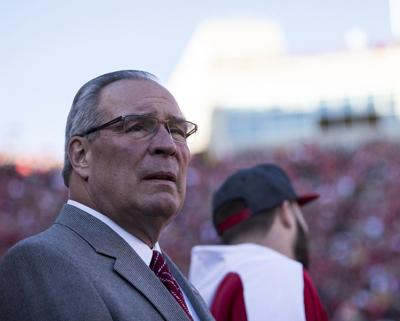 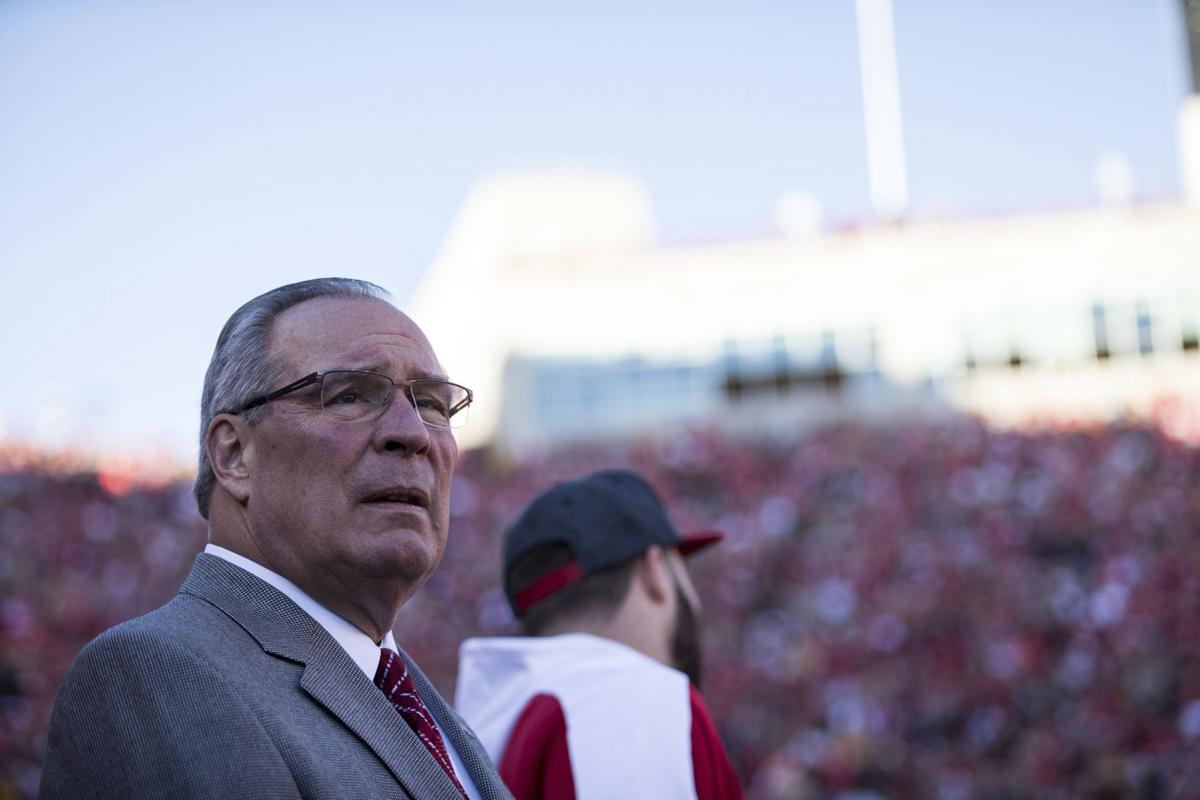 Bill Moos watches the Nebraska football team prepare for a game against Iowa at Memorial Stadium in 2017. 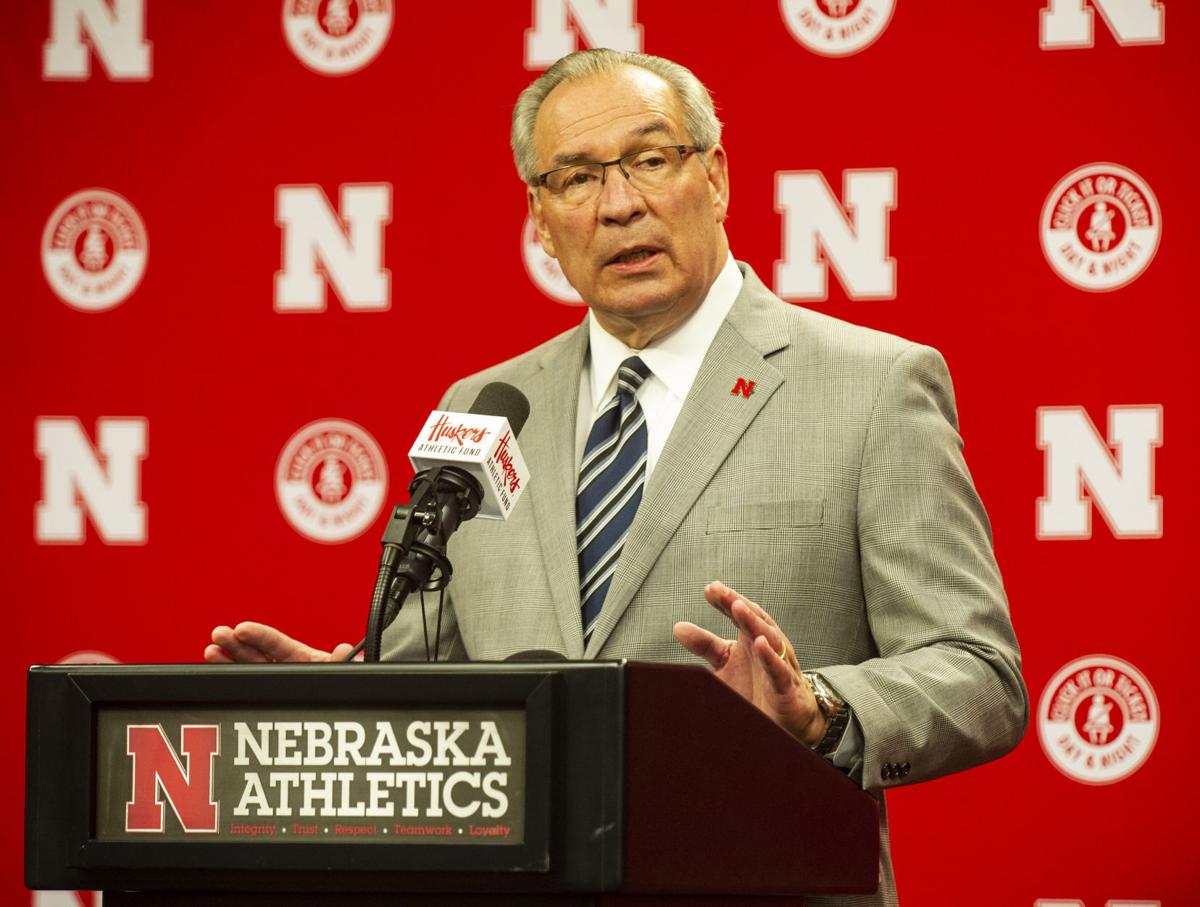 Bill Moos' tenure as Nebraska's athletic director is over.

Moos and leadership at the University of Nebraska-Lincoln confirmed his plans to retire, effective Wednesday.

"I started to think about it a year and a half ago or so," Moos told the Journal Star in a phone interview Friday afternoon. "Then the pandemic hit and there was no question that this ship needed its captain to navigate through that tough time and that crisis. I want to say this, gosh, I’ve been very blessed with a 40-year career and 28 as AD.

"The accomplishment of getting through this COVID year and how we did it will go down as one of the top accomplishments, I think."

While Moos' departure was described as a retirement, he made it clear as recently as last month that he had no intention of leaving his post atop the department before his contract expired on Dec. 31, 2022.

"We're going to move the dial here, and I don't want to be looking at that success from afar," he said in December. "I have every intention of fulfilling the contract."

"Each stop had a little bit different scenarios," Moos said. "But I couldn't come back here (to his ranch in eastern Washington) and sit and leave the department on anything but solid footing and in a winning position. It'd drive me crazy."

He addressed that timeline of six months ago on Friday, saying he didn't want conversation to be about his potential departure while morale was flagging during the pandemic.

"You’ve got to remember, in December, we were right in the middle of that pandemic and moralewise and everything else, my people needed my leadership and needed to know I was here," Moos said. "I was truthful to you (in December) and I thought, 'Hey, we’re going to fight and win and enjoy this all the way.' Everybody can have a little curve in the road sometimes and certainly I did."

Moos wouldn't say if the decision to retire June 30, at the end of the current fiscal year, was solely his.

"Apparently, this was the best time," he said, repeating the line when asked if the timeline was put to him by campus leadership.

He said he and UNL Chancellor Ronnie Green have had conversations in recent months during their regularly scheduled meetings.

"Those communications were fine. Nothing was ever contentious at all," Moos said. "As we go into June 30, I’m going to be happy and I think that Ronnie will be content that a new page is going to be occurring with Husker athletics. It wasn’t any problems. It was adult conversations of my future and the future of Husker athletics.

"In our normal meetings — we have a meeting each month — we had discussed the length of tenure just in general terms, because there’s things in the contract that I wanted to make sure that I fully understood in the event that maybe I would leave early. That was all fine."

“I step away completely content, knowing that our athletic program is reborn and rebuilt and that it has a solid, stable foundation.”

Green on Friday morning was at a NU Board of Regents meeting, which featured an unscheduled closed session of approximately 30 minutes. Only Green and regents were in the room for that portion of the meeting.

When the closed session ended and the meeting adjourned, Green huddled with a couple of people, including Regents chairman Paul Kinney and Regent and former Husker football player Jim Pillen.

"He made that decision and so we really respect his decision," Green said of Moos in a brief exchange with reporters. "We’ve been talking about it for a couple of weeks. I have nothing further to say.”

Kinney said he learned of Moos' retirement at the end of the meeting.

"He's been a good friend to the university," Kinney said.

Who might Nebraska target in a national search for Bill Moos' replacement?

“I’m proud of what he’s done and thankful," Pillen said. "That’s all I can say about it. Scott Frost, Fred Hoiberg, his support of Amy Williams and support of John Cook, bringing Will Bolt in. We have great leadership in all of our athletic programs.

Moos told the Journal Star in recent months that leading NU through the coronavirus pandemic was the most taxing, most difficult period of his long career in athletics administration.

"It was the highest morale this place maybe has seen since the national championships. … It was super," Moos said in August 2020 of what he thought he and his staff had built before the pandemic. "People were feeling good, and we’re getting it back and hey, all right! And then bam. All this.

"I'm working harder than I've ever worked. And I've worked hard, but this is tough."

Moos spoke to the Journal Star on Friday from his Lincoln office, where he held several meetings earlier in the day, including with Frost, his staff and a Zoom call with other head coaches.

Neither the football program nor the men's basketball program has been able to generate much momentum under Moos' two highest-profile hires, and both enter pivotal seasons in the fall and winter, respectively. Now, somebody else will helm the department as those campaigns unfold.

"The table is set here for great success," Moos said. "As I told my coaches, a good, solid, strong program will produce winning teams. This program is strong now, and it’s rebuilt. It was a rebuilding process. Some of the building blocks were OK, some of them had to be modified, some had to be completely changed.

"You look at it top to bottom and side to side, Nebraska athletics is in great shape."

The designation of Moos' departure as a retirement by NU is interesting in part because Moos was due a deferred compensation payment of $1.25 million if he remained the athletic director through the end of his contract. Though that provision only calls for prorated payouts in the event he is fired or otherwise disabled, one source said the expectation was that Moos and the university would come to some sort of agreement on essentially a severance package.

Moos said he and his wife, Kendra, are leaving this weekend and heading for Montana to visit his son en route to the couple's ranch in eastern Washington.

Photos: A look back at Bill Moos' tenure as Nebraska's athletic director

The Imagination of Bill Moos, 6.7

Watch: Moos: "I wholeheartedly wanted to run to this job."

Watch: Moos: "I wholeheartedly wanted to run to this job."

Hot Or Not: Justin Fields will be next rookie QB to get first career win?

From rancher in Washington to the Huskers, photos of Bill Moos from his introductory news conference as Nebraska athletic director and from hi…

Ep. 196: Talkin' Dylan Raiola and Dalano Banton as a busy June for the Huskers rolls on

Parker Gabriel and Chris Basnett break down the five players who have verbally committed to Nebraska football this month and plenty more.

Nebraska AD Bill Moos believes it's harder to be the hunted than the hunter, which is why he should help Will Bolt as much as he can.

"It tells me I better start winning," Nebraska coach Scott Frost said with a smile as he spoke to a crowd of about 60 during the Big Red Blitz.

Be it eight teams or 12 teams, expanding the playoff makes sense, especially in the context of declining TV ratings for the CFP national title game.

In the latest "Things I know" column, we cover Lee Sterling's lack of confidence in Adrian Martinez, and put some transfer news into perspective.

Steven M. Sipple: Moos on Alvarez: ‘When he had something to say, it always had value’

Bill Moos tells a story of a breakfast encounter with Barry Alvarez that encapsulates the edge the former Badger coach and AD brought to the Big Ten.

Husker Extra Podcast: Talkin' Dylan Raiola and Dalano Banton as a busy June for the Huskers rolls on

Parker Gabriel and Chris Basnett break down the five players who have verbally committed to Nebraska football this month, among other topics.

Bill Moos watches the Nebraska football team prepare for a game against Iowa at Memorial Stadium in 2017. 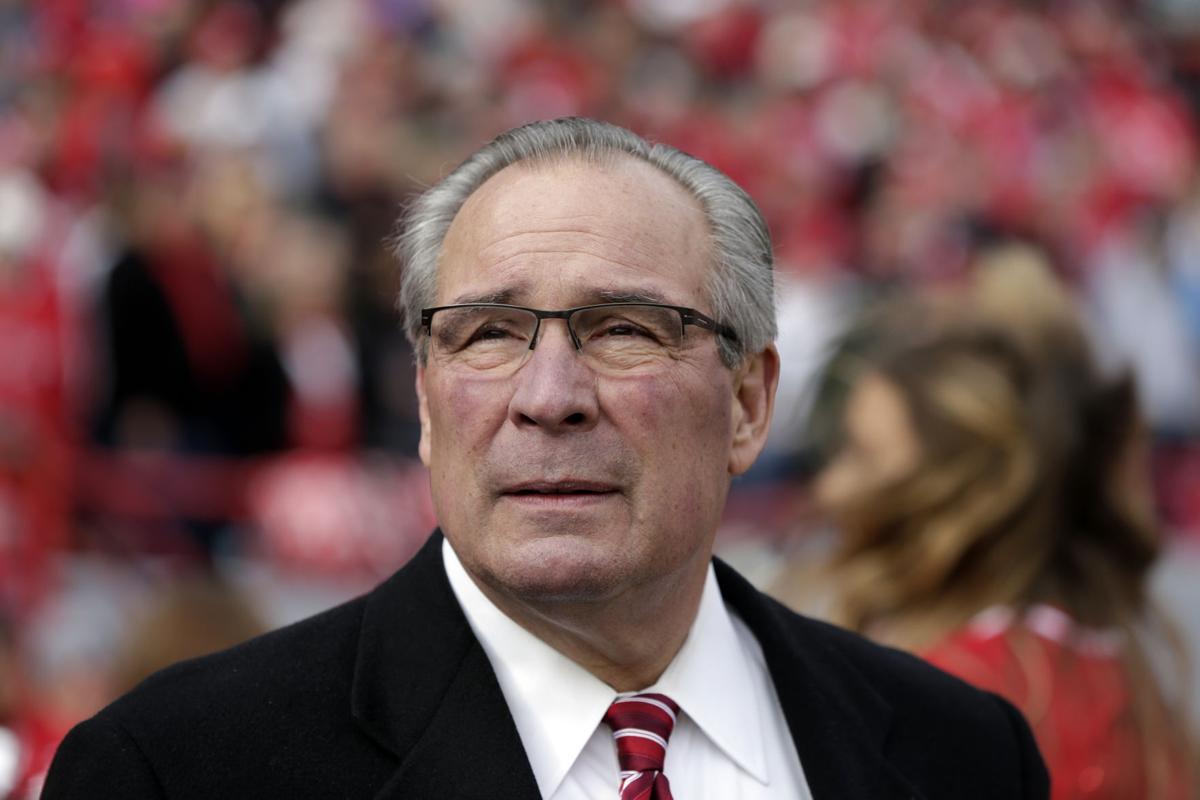