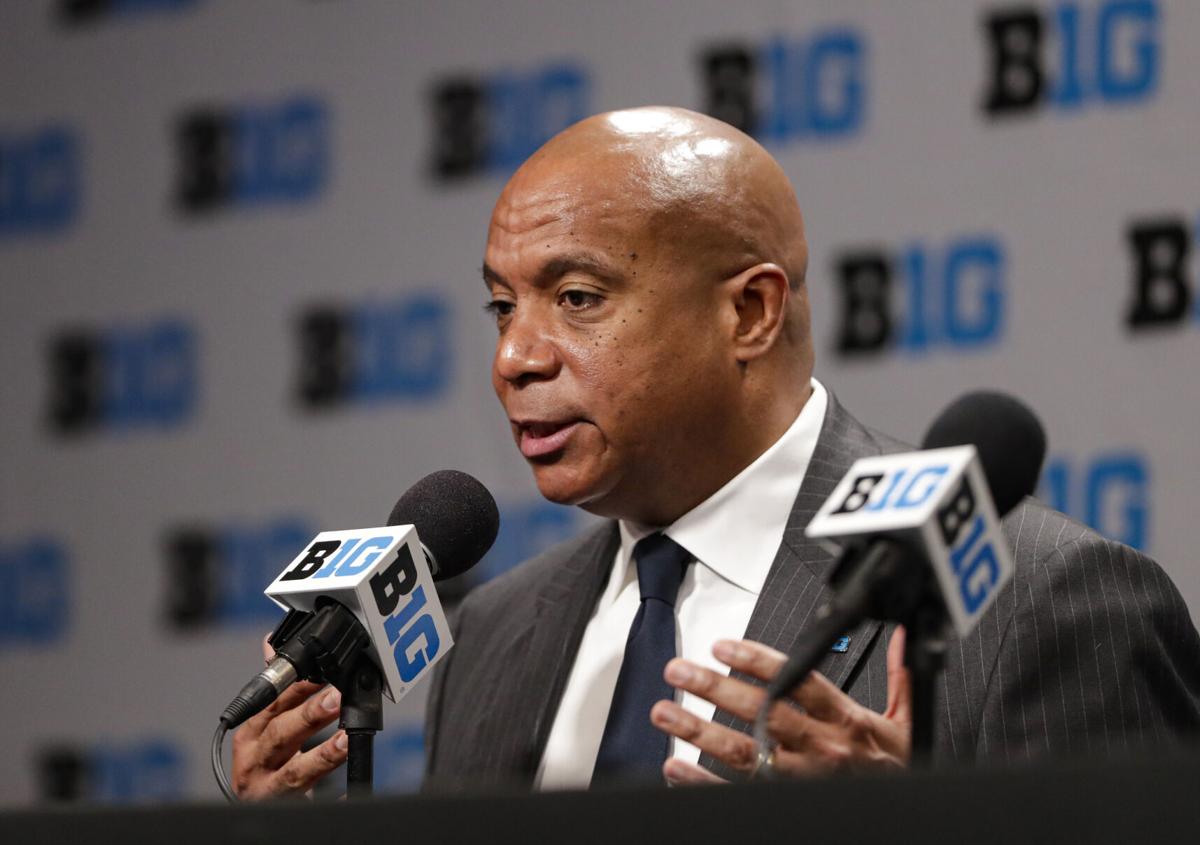 Big Ten Commissioner Kevin Warren addresses the media in Indianapolis on March 12 after it was announced that the remainder of the Big Ten Conference men's basketball tournament had been canceled. 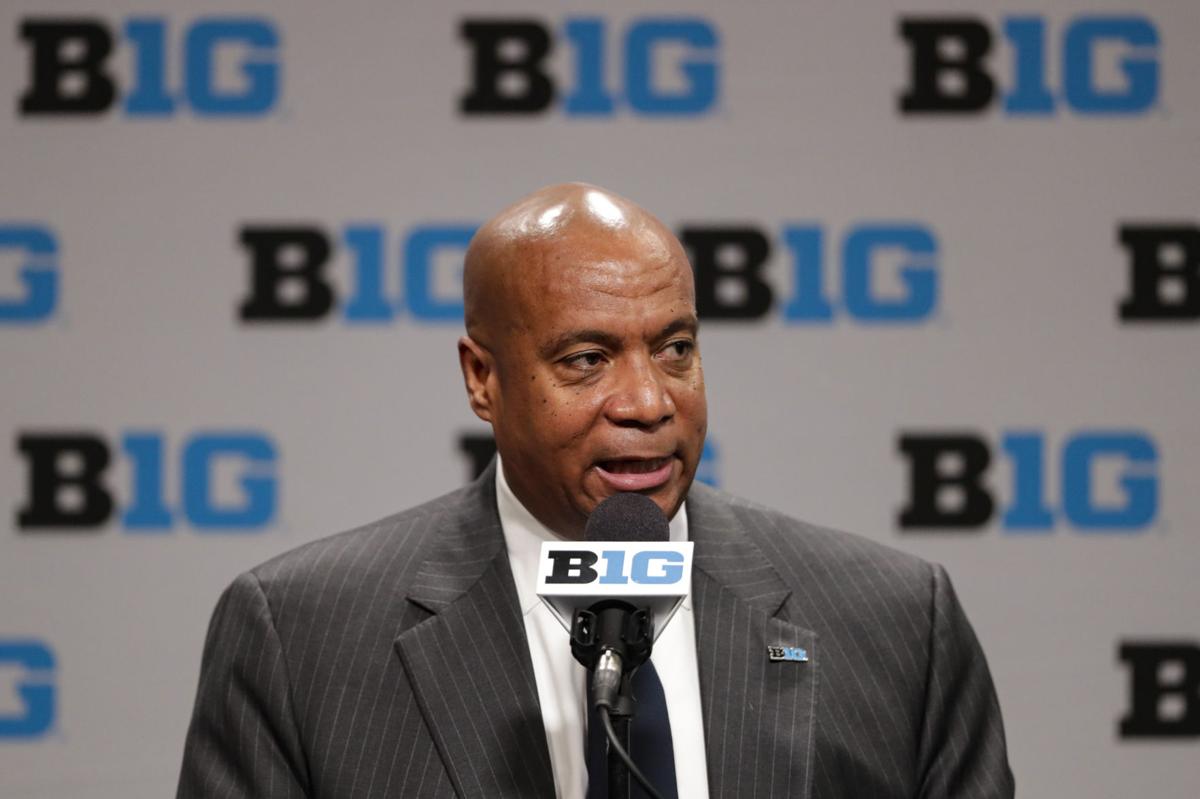 Big Ten commissioner Kevin Warren sent a letter to the league's 14 athletic directors saying that the conference plans on making a decision on a preseason camp timeline "in the next five days."

Husker athletic director Bill Moos made it clear Thursday afternoon he felt as though the Big Ten still had work to do before it released a conference-only schedule to the public.

A letter sent to the 14 Big Ten athletic directors from Commissioner Kevin Warren and Dr. Chris Kratochvil, the University of Nebraska Medical Center doctor and chairman of the Big Ten's Task Force for Emerging Infectious Diseases, makes it clear why.

The letter, obtained and published online by Cleveland.com, says "scheduling for fall sports remains fluid," and also notes that the league plans to make a decision whether to begin preseason camps for football on time "in the next five days." The Aug. 7 scheduled start date for Nebraska and every team that originally was set to begin its football season Sept. 5, of course, is coming up quickly.

"We want to say as clearly as we can that we understand the frustration associated with the circumstances created by the COVID-19 virus," the letter says. "The pandemic has made it challenging to provide information as early as we would like, but it's important for us to be thorough and transparent."

Moos expressed a little bit of that concern Thursday, telling the Journal Star "I can't say I'm fully optimistic" that a schedule would be completed by the end of this week or early next.

"It's very uncomfortable for the entire university," Moos said of the long wait for answers about when a season might start. "It's uncomfortable for the city of Lincoln and the whole state of Nebraska. Nebraska wants and needs football, and I want to deliver it. And I'm not sure when and if or how we're going to do that."

The contents of the letter were first reported by Eleven Warriors.

The NCAA recently ruled that teams are allowed to begin preseason camp Aug. 7 even if the season start date changes, as it has for several of the major conferences. The Big Ten, though, said it will be making its own decision on when its members can begin preseason preparations.

"We will not, and cannot, proceed with preseason camp until we are certain that we can do so safely and that will depend, in part, on testing," the letter said. "Once we have everything in place to execute our testing protocols effectively, including the appropriate number of tests secured for all fall sports, we can make a decision as to whether preseason camp will begin as currently scheduled."

The league hopes to release competition schedules for fall sports in August, according to the letter, and "while we remain hopeful for a start in September 2020, flexibility has been created within our scheduling models to accommodate necessary adjustments."

There is also this warning: "Even issuing a schedule does not guarantee that competition will occur."

The conference is planning to release its full set of medical policies and protocols for return to active competition next week.

Sources earlier this week told the Journal Star that if the Big Ten were to move off its original start date of Sept. 5 for football, the league was more likely to move back like some conferences have rather than move up like some Big 12 schools are planning.

The SEC and the Pac-12 are both now set to start competition Sept. 26, while the ACC is planning for the week of Sept. 7, and some Big 12 schools will get going as early as Aug. 29.

The Big Ten, per sources, is more likely to move back than forward as fellow Power Five conferences aim for differing dates.

The redshirt freshman is finally at full strength and will try to crack a rotation that starts with the senior tandem of Collin Miller and Will Honas.

Tate Wildeman is one of the few remaining players from the 2018 recruiting class who just simply hasn't had much opportunity yet.

During an appearance on "Husker Sports Nightly," Matt Lubick also had strong words of praise for Kade Warner.

Wan'Dale Robinson answered when his name was called last season. Expect even bigger things from the sophomore this fall.
Huskers

Nebraska head coach Scott Frost has spoken freely about the 6-foot-3, 285-pound Jurgens' potential to become a force in the college game.

Benhart, a 310-pound lineman, might be tasked with perhaps the biggest role among an interesting redshirt freshman class.

The Rutgers transfer will have a chance to make an impact on the Nebraska offense after a year of getting used to his new surroundings.

Big Ten Commissioner Kevin Warren addresses the media in Indianapolis on March 12 after it was announced that the remainder of the Big Ten Conference men's basketball tournament had been canceled.

Big Ten commissioner Kevin Warren sent a letter to the league's 14 athletic directors saying that the conference plans on making a decision on a preseason camp timeline "in the next five days."