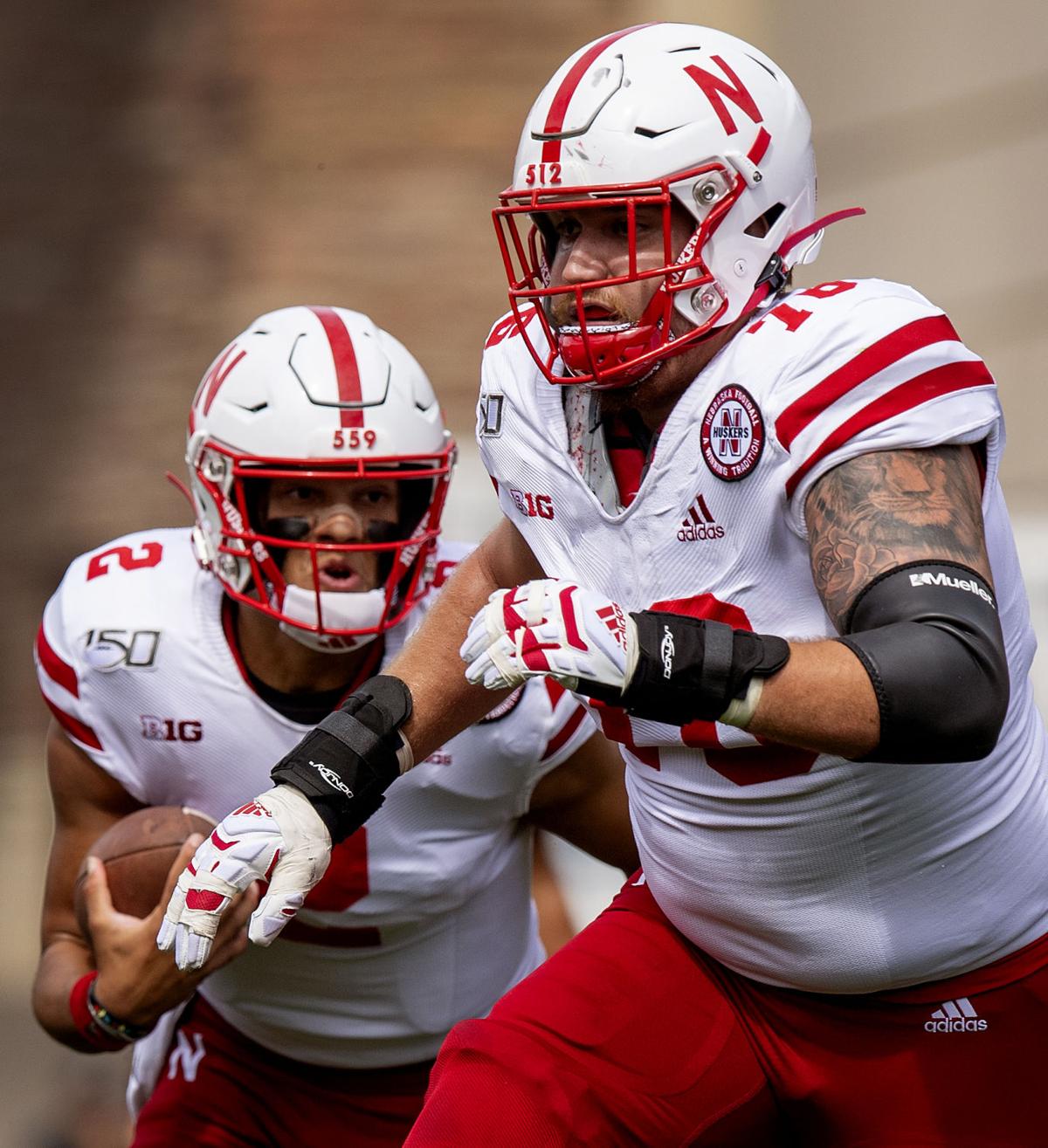 Nebraska offensive lineman Brenden Jaimes (76) blocks for quarterback Adrian Martinez (2) in the second quarter against Colorado on Sept. 7 at Folsom Field in Boulder, Colo. Line coach Greg Austin says is good enough to have made an NFL roster after last season.

Nebraska offensive linemen Boe Wilson (56) and Matt Farniok (71) await the snap to quarterback Adrian Martinez (2) in the third quarter against Iowa on Nov. 29, 2019, at Memorial Stadium.

Nebraska spring football consisted of just two practices before it was halted due to concerns about the coronavirus pandemic. Even so, conversations with head coach Scott Frost, several players and almost every assistant coach provided at least some information about every position on the field.

Over the next two weeks, the Journal Star is taking a position-by-position look at the Huskers, what was learned early in March and what to look for whenever NU returns to the field.

This will be an interesting group to watch, to see what the starting lineup ends up being when the season begins and if all the experience on the line can help Nebraska’s offense go at a better, and more consistent, level.

Regardless, the directive from Husker offensive line coach Greg Austin is that there is no reason the line shouldn’t be better. Austin has 17 scholarship offensive linemen, plus a dozen walk-ons, on the roster.

“We don’t have a new center, we don’t have new all of this,” said Austin when spring practice began earlier this month. “We’ve got 1,000 guys now, and plenty of reps to go around.”

When the game or practice film gets shown in the O-line room, Austin says no excuses will be allowed.

Farniok has started 24 straight games at right tackle over two seasons. But Austin thinks he may like Farniok as a guard, too.

“He’s a thick kid that has a good low center of gravity and can move people,” Austin said. “He’s shown an ability to move people, get his pads under guys. I think athletically he’s better in short spaces. I think his athleticism is tailored more to being a guard.”

The Nebraska offensive line is fortunate to have a player like Jaimes, a three-year starter who Austin said played really in 2019, especially in the second half of the season. You couldn't have asked for better tackle play, especially in pass protection, Austin says.

And Austin said Jaimes could have left early college a year early, and made an NFL roster.

“To be honest with you, it was, 'Is he going to come back? Is he not?' Nobody knew,” Austin said. “Brenden knows why he came back. Brenden had an opportunity to play in the NFL this year. So him coming back, this is not, 'I want to come back and increase my draft (stock).' This is a come back to get this stuff right and be the senior leader in the room that you’re supposed to be. Be the cornerstone of the offensive line and continue to mentor the young guys behind you and progress those guys and be the right-hand man to the coaches. Like, that’s your job now.”

Nobody knows what the condensed offseason will look like. How many “spring practices” will Nebraska get back when the NCAA opens things up? When will the whole team be back in Lincoln doing strength and conditioning workouts together?

But in a condensed offseason the offensive line may be best suited to lead the Husker offense, with the mix of returning starters and players with one or two years in the program behind them. That's more depth than the line has had during the previous two seasons.

With economic concerns growing, Moos ramps up consideration of alcohol at Memorial Stadium

Nebraska athletic director Bill Moos has challenged his senior staff to come up with new revenue streams amid the coronavirus pandemic.

Spring snapshot: Who, what, when, where just the beginning of questions facing Husker WR room

This is shaping up to be quite a challenge for first-year offensive coordinator and receivers coach Matt Lubick.

Check out the latest episode of the Husker Extra podcast.

Travis Vokolek is capable of making immediate contributions, his coach says, and redshirt freshman Chris Hickman will play both WR and TE.

Dedrick Mills is a good starting point at RB after becoming more comfortable last season. After him, the Huskers may rely on fresh faces. A lot.

Spring snapshot: For Husker QBs, eyes (and making up for lost time) will be critical when action resumes

The Journal Star is taking a position-by-position look at the Huskers. Naturally, we begin in the quarterbacks' room.

Frost talks scuttled Husker spring on radio, wants Nebraskans 'to rally around each other'

The Nebraska football leader gave an update on the team's state of affairs during a bizarre time, and offered a message to the people of the state.

Nebraska offensive lineman Brenden Jaimes (76) blocks for quarterback Adrian Martinez (2) in the second quarter against Colorado on Sept. 7 at Folsom Field in Boulder, Colo. Line coach Greg Austin says is good enough to have made an NFL roster after last season.

Nebraska offensive linemen Boe Wilson (56) and Matt Farniok (71) await the snap to quarterback Adrian Martinez (2) in the third quarter against Iowa on Nov. 29, 2019, at Memorial Stadium.