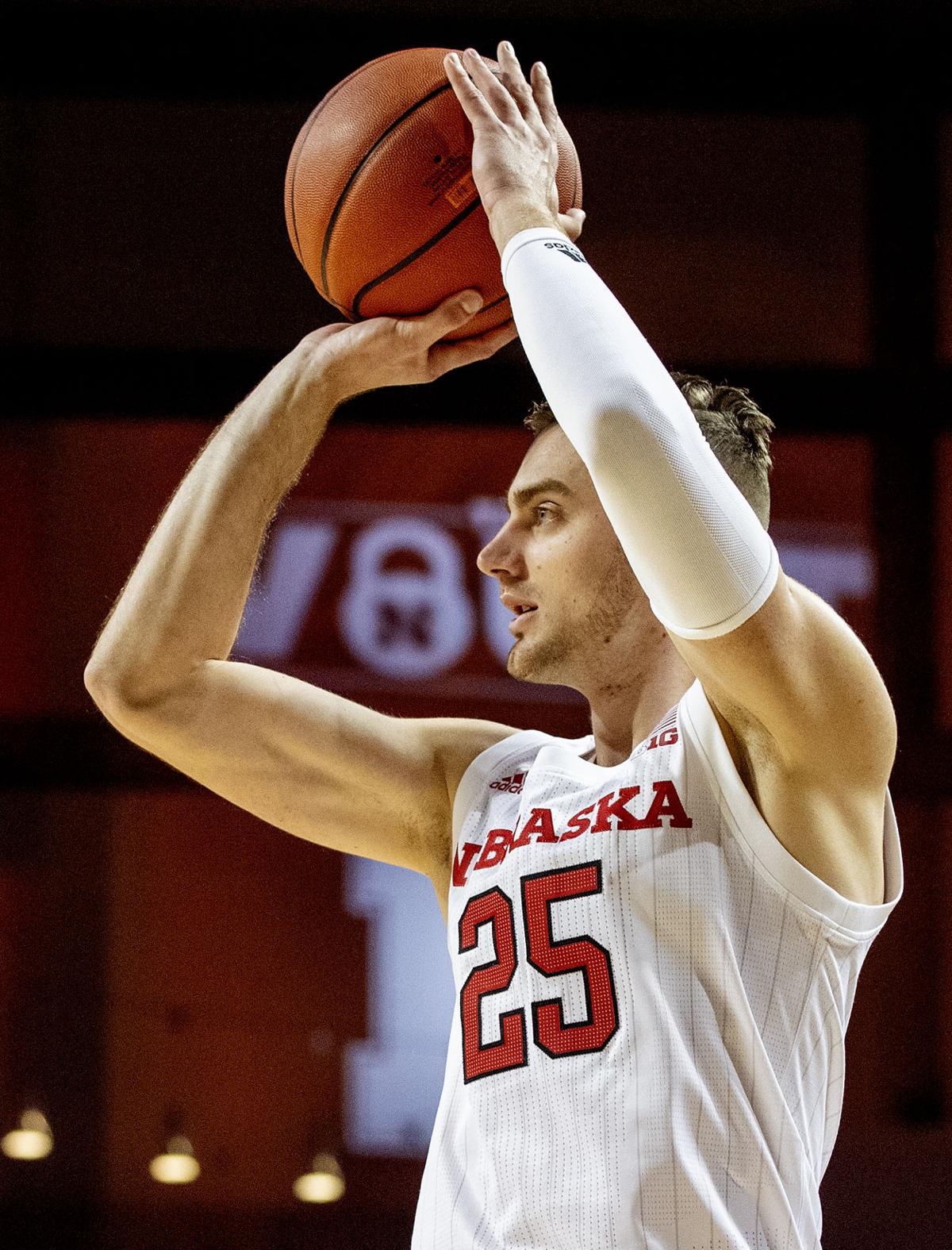 Nebraska guard Matej Kavas (25) attempts a three-pointer in the first half of an exhibition against Doane on Oct. 30, 2019, at Pinnacle Bank Arena. 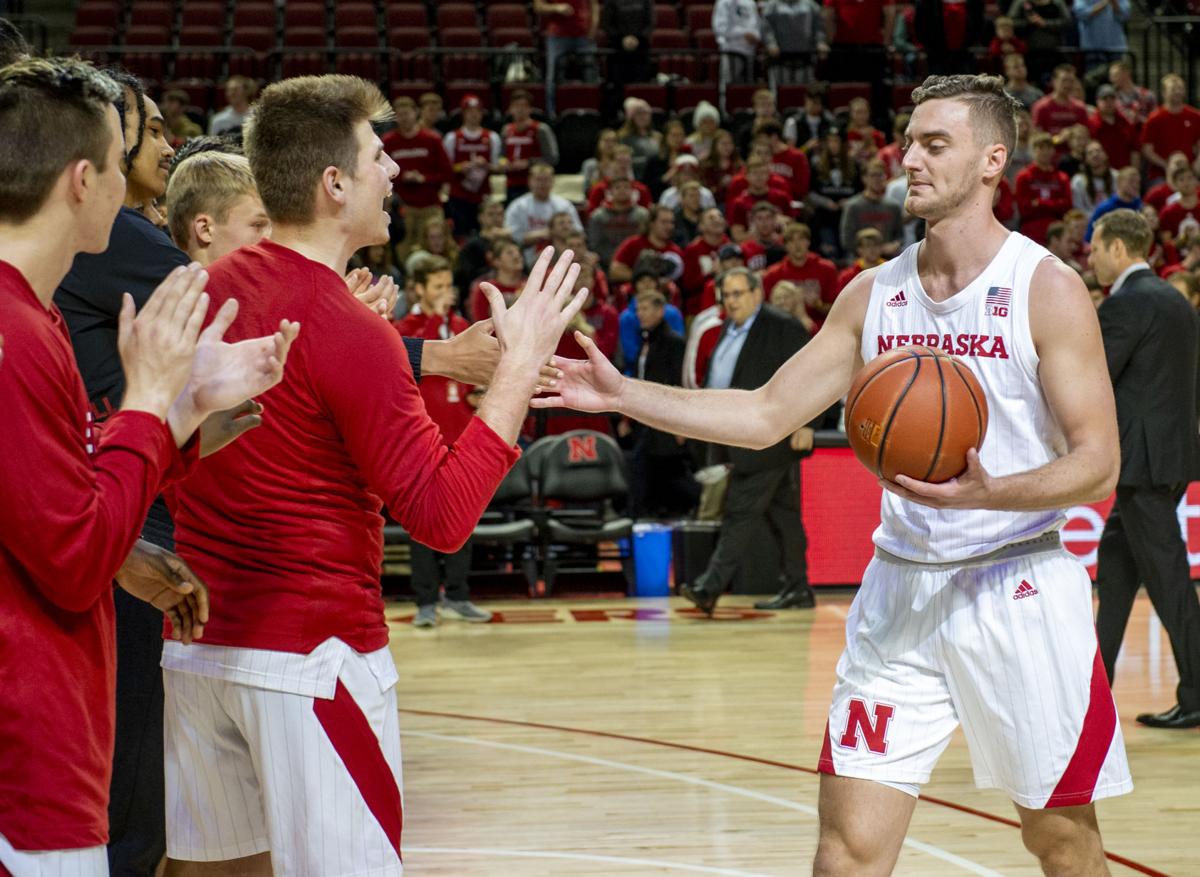 Nebraska’s Matej Kavas (right) high-fives his teammates after receiving a ball for scoring 1000 career points before a game against Purdue on Dec. 15, 2019, at Pinnacle Bank Arena.

Sometimes, a basketball career ends quietly in the middle of the night.

Nebraska senior forward Matej Kavas announced on Twitter early Sunday morning that his college career was over following the hand injury he suffered in the first half of Saturday's game against Wisconsin.

Kavas announced the news at 2:42 a.m. Sunday, and NU made the news official with a midday news release.

"It is disappointing to see Matej’s college career end because of an injury,” Nebraska coach Fred Hoiberg said in the release. "Matej was one of the first players to commit to Nebraska when we started last spring. He believed he could help set the foundation for our program even though he had one season to play. Everyone in our program appreciates Matej, and we look forward to him having a full recovery and getting the opportunity to continue playing after college."

A 6-foot-8 guard from Slovenia, Kavas had been on the court for less than a minute Saturday before coming out of a scrum for a rebound holding his left hand.

He initially went to the bench before heading back to the locker room, and returned to the bench for the second half with his hand heavily taped.

Hoiberg said after the game the initial diagnosis for Kavas was a soft-tissue injury involving a ligament in his left hand, and that he would undergo an MRI on Monday. According to the news release, Kavas will undergo further testing and evaluation by a hand specialist to determine the further course of action.

"I felt like I still had things left to prove for this year and was feeling currently in great basketball shape," Kavas wrote. "However, I am extremely proud of the individual and team success I had through my entire college career."

Kavas had just begun to come on after struggling for much of the season, going 5-for-11 (45%) from three-point range over Nebraska's previous three games and scoring 11 points in the loss at Maryland.

He came to Lincoln as one of the most accurate shooters in college basketball. In his first three seasons playing for Seattle University, Kavas was a career 45% three-point shooter who had taken more than half his career shot attempts from beyond the arc.

But Kavas has also dealt with a long string of setbacks.

He tore an ACL in the summer of 2015 and was forced to miss what would have been his freshman season. Last year, he suffered a broken shin and missed nine games.

Kavas was the Western Athletic Conference freshman of the year in 2016-17 after averaging about 12 points and four rebounds per game in conference play.

But Kavas never found the same level of success in Lincoln that he enjoyed in Seattle. His final season ends with him averaging 5.5 points and 1.2 rebounds per game while shooting 38% from the field and 34% from three-point range.

Nebraska is rekindling a rich history with Kansas State, beginning with a trip to the Sprint Center in Kansas City, Missouri.

Seven Husker teams have made the NCAA Tournament. Another won the NIT. So which team is best? Vote now.

First time as an AP poll voter a learning experience

The Journal Star's Chris Basnett was one of 65 media members nationwide to vote in the weekly Associated Press Top 25 poll.

Burke joins Jervay Green as Huskers on their way out of Lincoln.

Burke joins Jervay Green as Huskers on their way out of Lincoln.

A source told the Journal Star that Jervay Green is no longer with the team and has entered the transfer portal.

Nebraska guard Matej Kavas (25) attempts a three-pointer in the first half of an exhibition against Doane on Oct. 30, 2019, at Pinnacle Bank Arena.

Nebraska’s Matej Kavas (right) high-fives his teammates after receiving a ball for scoring 1000 career points before a game against Purdue on Dec. 15, 2019, at Pinnacle Bank Arena.