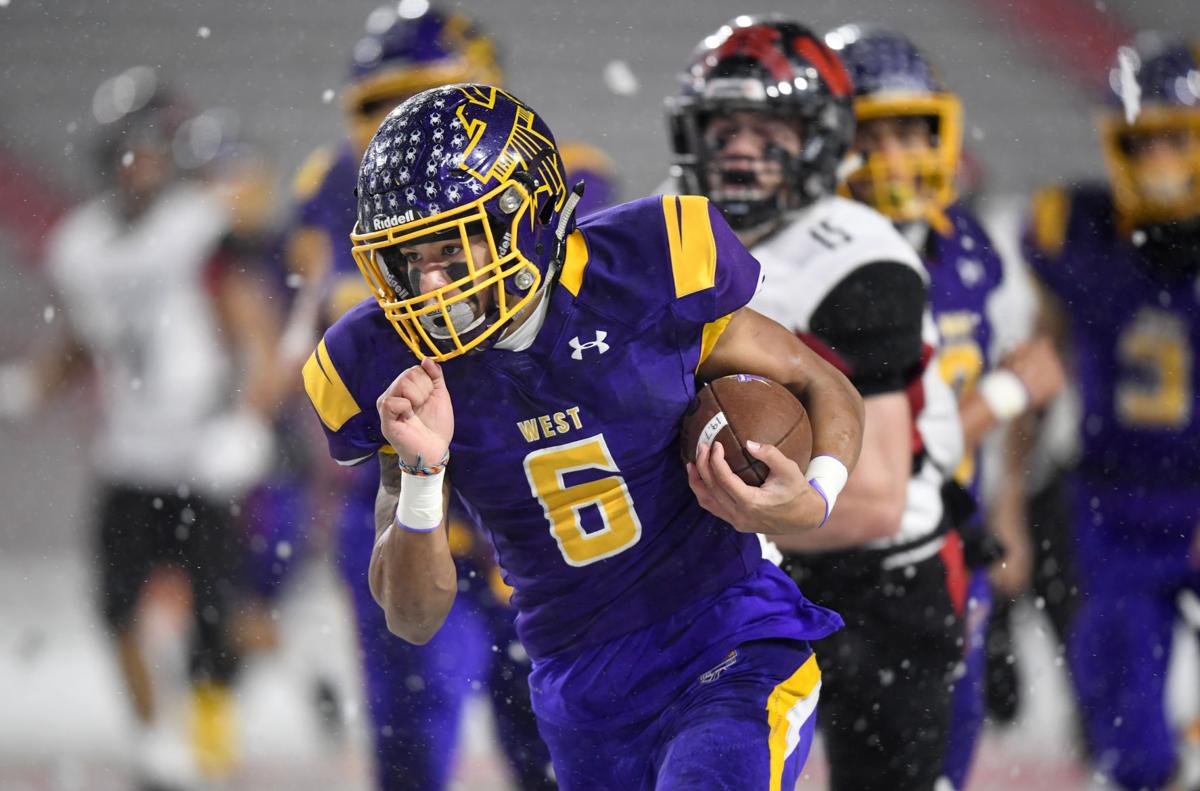 Bellevue West's Keagan Johnson (6) heads to the end zone for a touchdown against Omaha Westside in the first half of the Class A championship Nov. 26 at Memorial Stadium. Johnson is one of the Huskers' recruiting targets for the class of 2021. 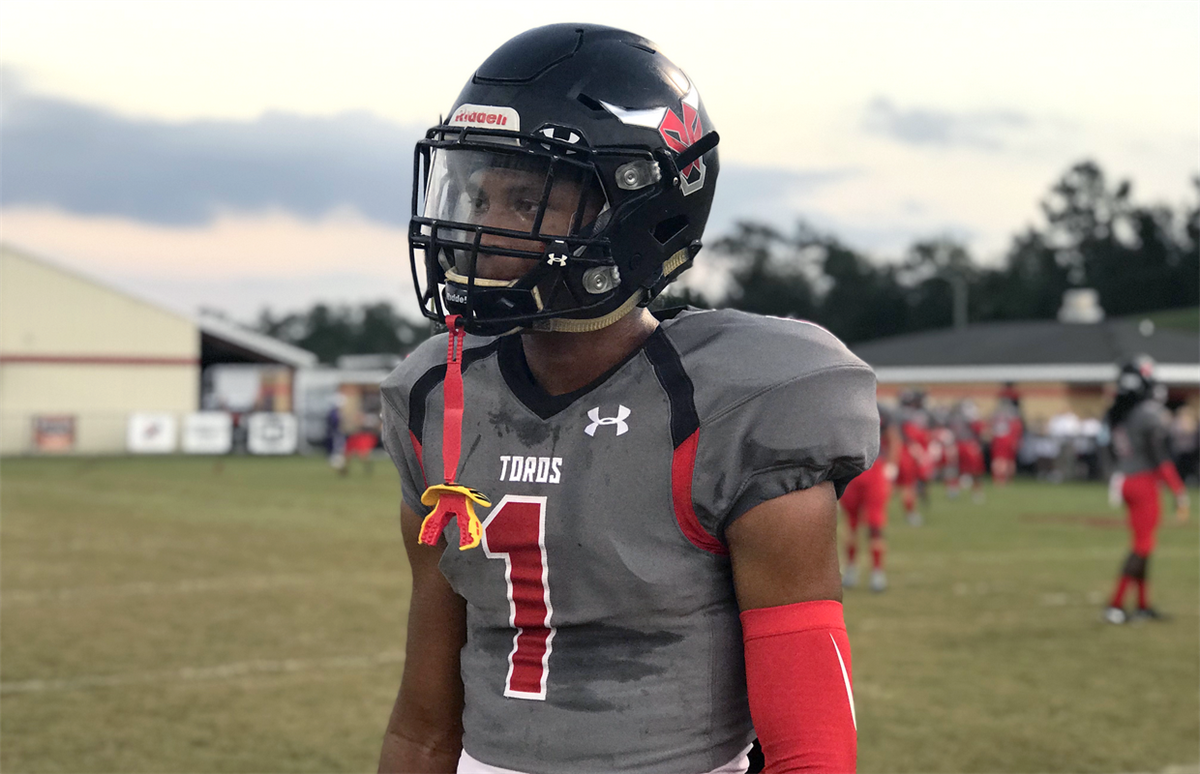 Kris Abrams-Draine, a Class of 2020 wide receiver (Spanish Fort, Alabama), is slated to take an official visit to Lincoln this weekend.

College football season is officially in the rear-view mirror after Monday’s national title game, and the second National Signing Day — now second fiddle to the more popular December date — is only three weeks away.

By the weekend, Nebraska will be hosting an official visitor and several 2021 prospects for a junior day, then the coaching staff will hit the road to recruit during a two-week contact period.

With only two spots remaining in the 2020 class — the Cornhuskers signed 23 in December and can use those final spots on either recruits or transfers over the remainder of the offseason — this month's recruiting will be split between the current class and making the rounds to schools that have 2021 prospects and beyond.

NU has one known 2020 official visitor set to come to campus this weekend, wide receiver Kris Abrams-Draine of Spanish Fort, Alabama. Abrams-Draine played quarterback for most of his senior season out of necessity and put up big numbers, helping guide Spanish Fort deep into the postseason despite being new to the position.

He posted impressive figures, rushing for 1,745 yards and throwing for 723, compiling 26 total offensive touchdowns and adding a pair of interception return scores.

Abrams-Draine has verbally pledged to LSU and Ole Miss in the past, but he has recently told recruiting services that he’s likely to visit Nebraska, Oregon and Florida State before the Feb. 5 signing date.

At 6-foot-1 and 170 pounds, he’s somewhere in between the two big receivers NU has signed for 2020 in Zavier Betts and juco Omar Manning and the smaller guys like Alante Brown, Will Nixon and Marcus Fleming.

Abrams-Draine is one of the only 2020 high school players who is squarely on the radar screen right now. He’s joined by three-star defensive lineman Tanoa Togiai (Rigby, Idaho) who visited back in January but didn’t sign a national letter of intent.

By 'betting on ourselves,' Huskers land nine commits in eight days and finish with a flourish

The Huskers are also hosting the first of two straight Saturday junior days this weekend, giving a chance for 2021 prospects to get to campus unofficially. NU will host another on Jan. 25, then will have more over the course of spring ball in March and April.

Here’s a look at a couple of the prospects the Journal Star has confirmed are attending.

Fidone, a 6-5, 210-pounder at Lewis Central High, is one of the most sought-after prospects in the Midwest. Last week alone, he picked up offers from Georgia and Florida, and already has a host of Big Ten interest.

The four-star prospect has been on campus in Lincoln several times already and is slated to make a return trip.

Wilkins is a big, rangy defensive end prospect from the West Coast and listed at 6-5 and 240 pounds. He’ll be making his first known trip to Lincoln this weekend and is being recruited by defensive line coach Tony Tuioti.

The most recent in-state prospect to pick up a scholarship offer from Nebraska, Johnson is a good athlete who could potentially play either side of the ball in his college career. He was used primarily at wide receiver as a junior for Michael Huffman’s prolific offense at Bellevue West.

Johnson also has offers from Iowa and Iowa State. His dad, Clester, played at Nebraska; his oldest brother, C.J., was a productive receiver at Wyoming; and his middle brother, Caden, is an FCS All-American at South Dakota State.

Brecht is a big receiver at 6-4 and 190 pounds and has offers from in-state Iowa and Iowa State, along with the Huskers, Kansas and others.

Brecht has been to Lincoln multiple times and is making another trip this weekend. He is a three-star prospect for both 247Sports and Rivals.

Those aren’t likely to be the only players on campus, and lists do tend to change over the course of time leading up to events. A few players currently slated to be on campus Jan. 25 include defensive linemen Jeffrey Bowie (West Branch, Iowa) and Ryan Keeler (La Grange Park, Illinois), athlete Seth Malcom (Tabor, Iowa) and Kearney Catholic quarterback Heinrich Haarberg.

Driving for 6: Hitting the recruiting trail for 2022 updates, big summer plans and a personnel note

Coaches can't visit prospects, and prospects can't visit schools. But recruiting doesn't stop. Check in on a few standouts on the Husker radar.

The NU leader gave the new offensive hire a ringing endorsement, and explains why he feels "caught up" in recruiting for the first time in his tenure.

The Huskers struggled at outside linebacker last season. With a new but familiar coach in tow, can a core of veterans and new signees turn the tide?

Bellevue West's Keagan Johnson (6) heads to the end zone for a touchdown against Omaha Westside in the first half of the Class A championship Nov. 26 at Memorial Stadium. Johnson is one of the Huskers' recruiting targets for the class of 2021.

Kris Abrams-Draine, a Class of 2020 wide receiver (Spanish Fort, Alabama), is slated to take an official visit to Lincoln this weekend.