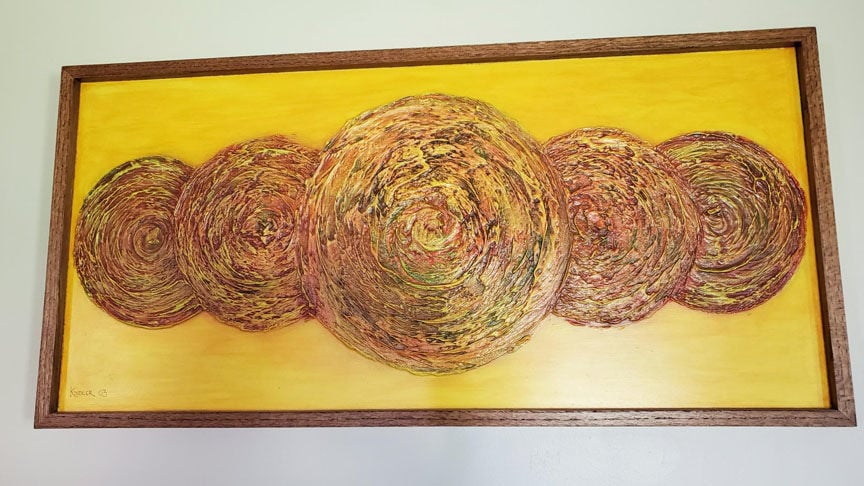 A photo of hay bales created by the late Ken Kindler. 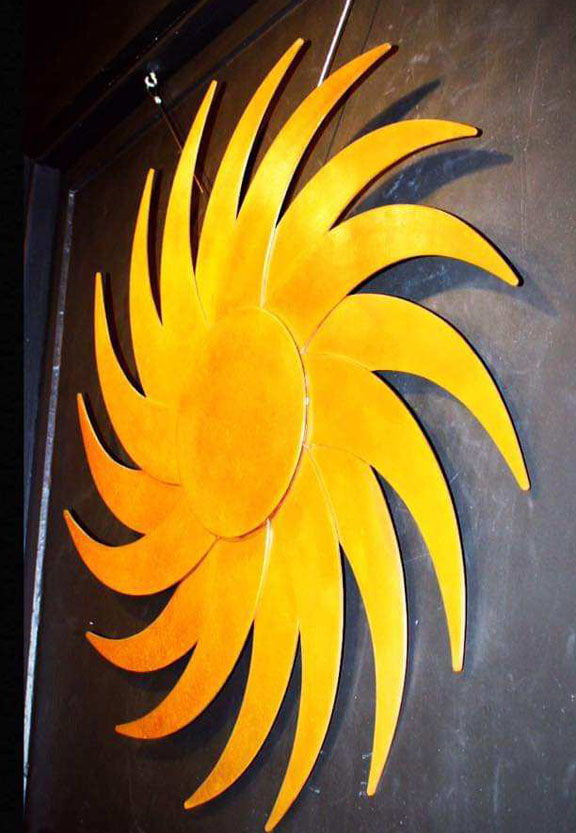 A sun creation made by the late Ken Kindler, who was raised with his family in Ulysses. 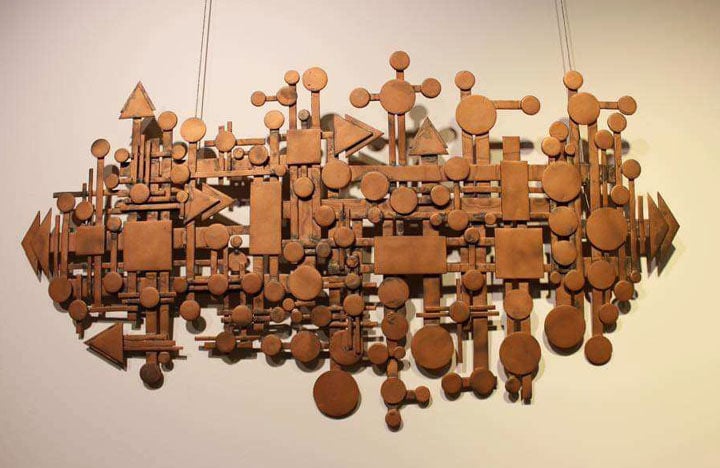 One of Ken Kindler's copper creations hangs on display. 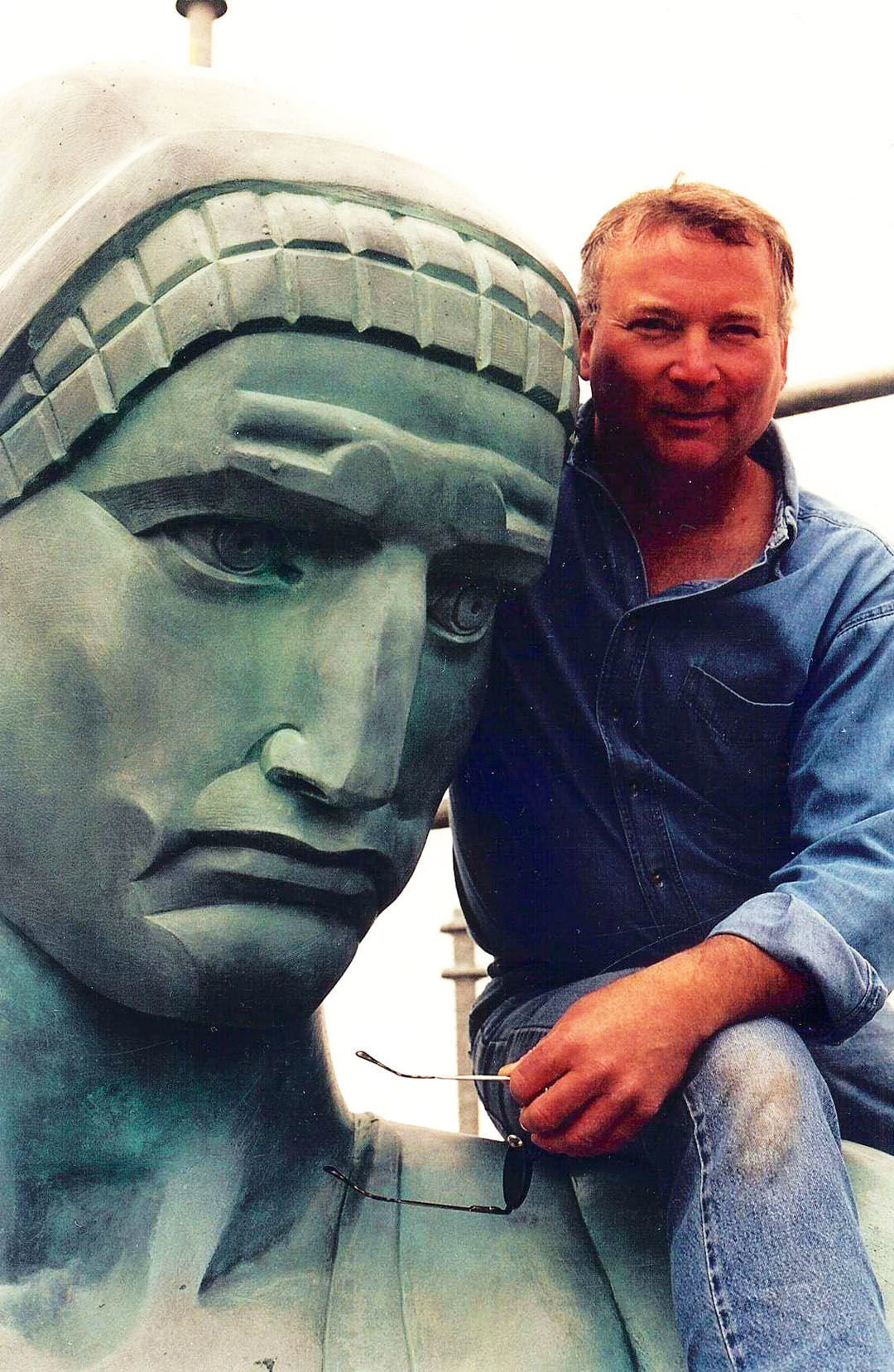 Ken Kindler poses for a photo with the Sower at the top of the Nebraska Capitol Building. 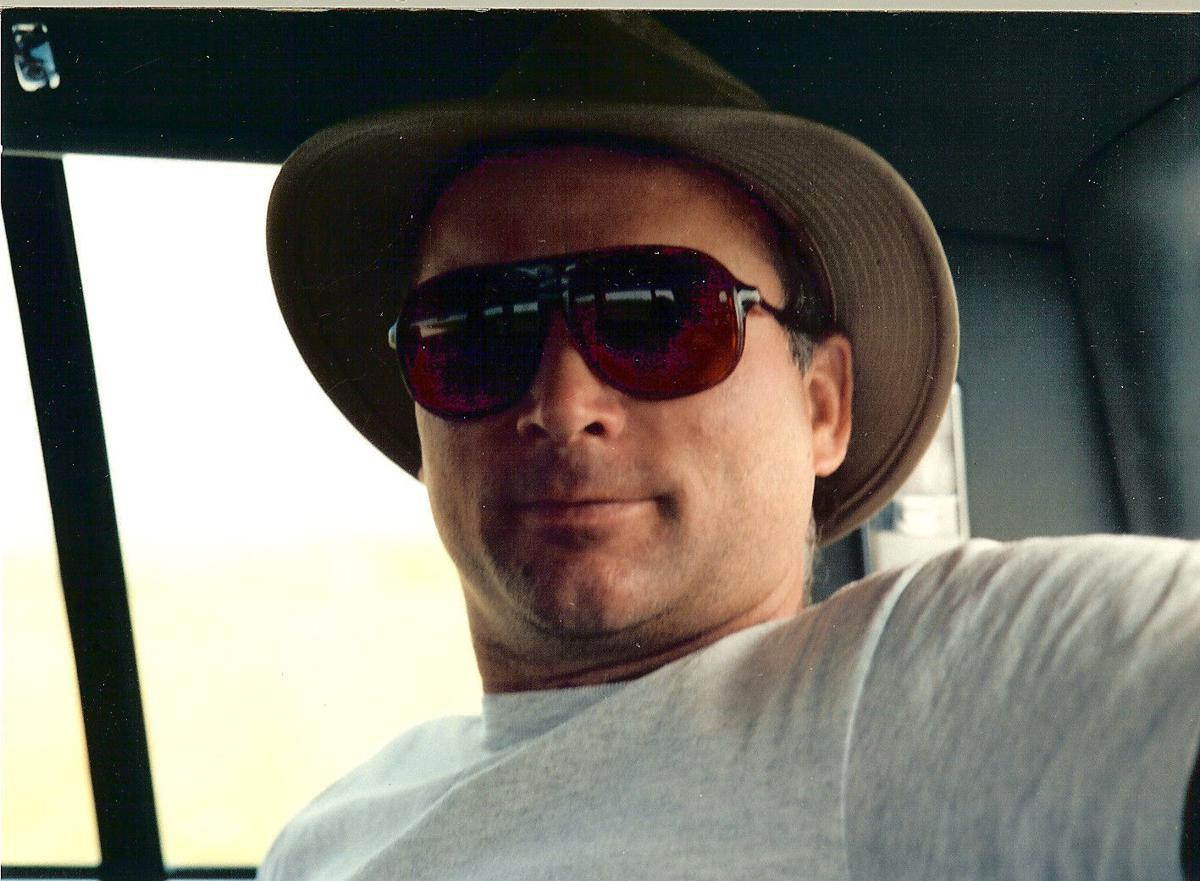 The Late Ken Kindler snaps a selfie while traveling. The Ulysses native died in 2014 after a battle with esophageal cancer, but his memory is being preserved through the new Kindler Hotel erected in downtown Lincoln. 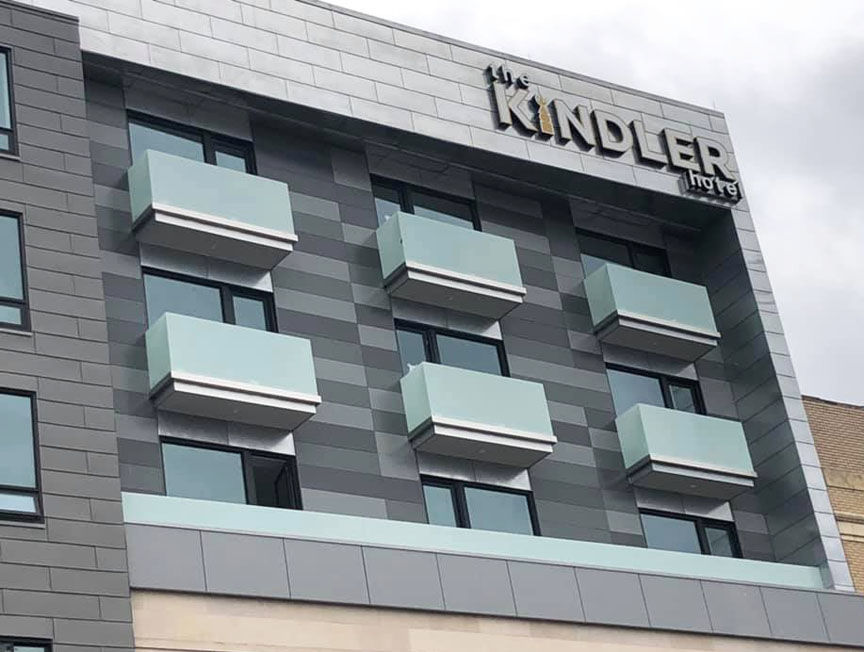 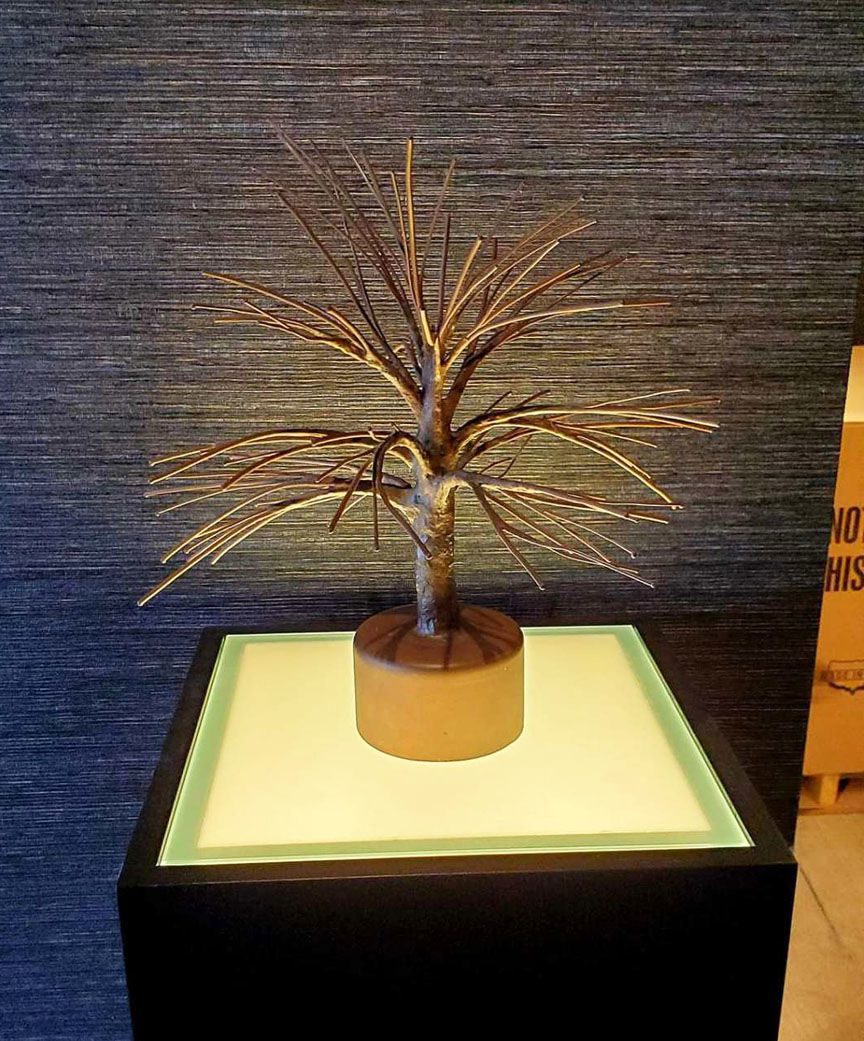 One of Ken Kindler's artistic creations sits on a table.

Karen Kindler Palensky remembers her brother, Ken, as being a very down-to-earth man who cared deeply about those closest to him.

In 2014, Ken died at the age of 60 after a hard-fought battle with esophageal cancer, but the Butler County native’s memory – and artistic legacy – is being preserved through a new luxury, boutique-style hotel that is slated to open this week at 11th and P Street in downtown Lincoln.

The Kindler Hotel, a 49-room venue designed head to toe by Beverly Hills interior designer Ross Vincent, features several pieces of Kindler’s work and was designed to replicate his artistic style and really represent Nebraska culture and heritage as a whole.

“It’s a little overwhelming because he was so down to earth,” said Palensky, who grew up with Kindler and another sister in Ulysses. “And for this to happen to him, it’s kind of just huge. He was very talented, very generous, family-oriented and didn’t want any spotlight on himself. So for this hotel to be dedicated to him is kind of humbling, but it’s also very sweet, you know?”

Prior to graduating from Seward High School in the early 1970s, Palensky said she always thought of her brother as more of an athlete than artist. A star track athlete, Kindler won the Nebraska Class B discus gold medal at the state track meet before moving to Lincoln right after high school’s end.

Palensky said she isn’t sure of the exact time frame, but somewhere along the line her brother got involved in photography, followed by all of his other artistic interests and pursuits that would gain him attention across the state.

The plot of ground the Kindler Hotel now sits on was purchased about two years ago by Kindler’s daughter, Brooke Castaneda, and her husband, Nick. The duo envisioned an upscale establishment that truly would be a one-of-a-kind stay for people living in Lincoln, or just making their way through.

“It’s not a Marriott, it’s not a Hilton, it is distinctive, and it represents a lot of Nebraska elements,” said Michelle Lee Venter, director of sales at the Kindler Hotel. “For instance, there is a chandelier that resembles something in relation to an ear of corn, the cowhide on the back of the bar stools is a prominent feature …

“In regard to Ken’s art, the designer knew that he used to design wind chimes, so the two chandeliers that are featured in the lobby area, they look like wind chimes – it’s just outstanding.”

In addition to its unique design, the Kindler Hotel is expected to offer patrons a very different sort of dining experience in “Boitano’s Lounge.” The lounge was developed, in part, by Olympic gold medal figure skater and Food Network star Brian Boitano, a friend of the Castanedas.

Venter said that she believes the hotel’s namesake would be taken aback by the final outcome of the project, one spearheaded by a family member, nonetheless.

“I think it would make Ken Kindler very proud,” Venter said. “I talked extensively with Cathy (Ken’s wife), and she is teary when she walks in.”

Palensky said she also had trouble keeping her emotions in check when she recently saw the final outcome of the facility.

“I was down there yesterday, and it is just looking great,” Palensky said of her Sunday visit. “My daughter and I went down and his (Ken’s) family took us through. It’s kind of an emotional time to see the plaque with his name on it, and some of his artwork being throughout the hotel.”

Ken’s sister added that she thinks the final hotel product does an exceptional job of reflecting Ken’s artistic prowess while also showcasing what Ross Vincent’s work is all about.

“I think it is a great mixture of Ross’ talents with Ken’s ideas for the things he did in art,” she said. “Ross really put forth that effort, even in the lighting, to resemble some of Ken’s pieces. There are a lot of coppers, and it’s just really beautiful.”

Palensky, who lives in David City, noted though while Kindler spent most of his life in Lincoln, Butler County was the first place he called home.

“I think it's important for Butler County to at least have this article on him because our parents came from here, my dad was born and raised in Ulysses,” Palensky said. “My mother was born and raised just north outside of David City in a little area called Appleton.

“There is just a long history of both families in the community and in the county.”

A photo of hay bales created by the late Ken Kindler.

A sun creation made by the late Ken Kindler, who was raised with his family in Ulysses.

One of Ken Kindler's copper creations hangs on display.

Ken Kindler poses for a photo with the Sower at the top of the Nebraska Capitol Building.

The Late Ken Kindler snaps a selfie while traveling. The Ulysses native died in 2014 after a battle with esophageal cancer, but his memory is being preserved through the new Kindler Hotel erected in downtown Lincoln.

One of Ken Kindler's artistic creations sits on a table.